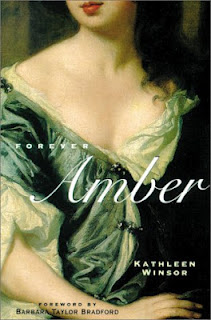 This is my first post, and I’m very excited to be part of The History Girls line up.  You won’t know me yet, but wait, don’t go!  I’m currently ‘book pregnant’ to two publishers.  As a historian for adults, I’ve written Georgian London, which will be out with Viking soon.  Then, next summer, Chicken House will be publishing my first novel for Young Adults, which is based in the City of London and full of folklore.

So, I thought I would begin at the beginning, where my love for historical fiction was born.  Like thousands of others, it started with Kathleen Winsor’s Forever Amber.  Published in 1944, it sold over three million copies and was also banned in Boston as ‘obscene’.  Winsor’s Amber, a headstrong girl from the country who follows the inappropriately-named aristocrat Bruce Carlton to Charles II’s Restoration London, is a wonderful heroine.  She is also infuriating, obtuse, and not always entirely convincing but Winsor’s research into the period was meticulous.  As Amber bounces from one disaster to another and indeed, one lover to another, she carries the reader through one of the most interesting and vibrant eras in London’s history.  From streetlife to domestic scenes, the city comes alive.  The book is also soaked in romance and elaborate descriptions of everything Amber wears.  Love and sex are central, and as the Boston book-banners noted there are seventy references to ‘intercourse’ and numerous ‘objectionable passages’.  But no matter how many lovers she takes, her heart remains with Carlton.  He, meanwhile, is intent on keeping his social status and improving his fortune, and so has no intentions of fulfilling Amber’s dreams of marriage, even after she risks her own life to nurse him through the plague.

‘The plague bit’ of Forever Amber was the moment I realised historical fiction, and history itself, was for me.  For some, it’s the romance, Amber’s devotion to her charismatic idol.  For others, the rich fashions.  For the fifteen year old me, it was the sweating, the vomiting and bloody buboes, the squalor.  As Amber and Bruce fight for survival, around them London falls silent except for the tolling of the bells and the rumble of the dead-cart.  I was hooked.

Twenty-something years later, here I am, a historian who writes about ordinary people with a borderline unhealthy interest in the underbelly of long ago London.  Is Forever Amber great historical fiction?  In parts.  Is Amber a successful heroine?  Essentially, no.  Did Kathleen Winsor influence my life?  Definitely.  It wasn’t the fashions or the sex or the (clearly) doomed pursuit of an unattainable man, but a vivid portrait of a terrifying moment in history.  I’ve read hundreds of historical novels since and many very good ones, but Forever Amber has a place in my heart.  And every time I open a new historical novel, I hope that somewhere inside will be the next plague bit.
Posted by Unknown at 13:54

Welcome, Lucy! I look forward to your books, and your posts, and always so much enjoy your Georgian London site already.
Now must go off and try to write 'a plague bit' in my WIP ...

Very good to make your acquaintance, Lucy! Loved Forever Amber as a girl and it was a great eye opener in all sorts of ways. Have forgotten the details now but did love it...

Hallo, Lucy! I enjoyed this post - though I must have been a weird teenager myself because I couldn't be doing with Forever Amber! I look forward to reading your books and posts. If you want 'the next plague bit', try my YA novel "Forged in the Fire", which has plague, love, sex and fire! Also Mary Hooper's "At the Sign of the Sugared Plum".

And Sally Nicholls' All Fall Down! Welcome to the blog, Lucy,

Hello Lucy and welcome to HG.

I recall my own enthusiasm for the historical bits of Amber - and maybe some of those other moments too? I went to a strict convent school where all books had to be covered in obscuring brown paper. Useful for the carrying of illicit volumes suhc as Amber, even though the cover shown is far more genteel that the one I can still visualise.

Looking forward to your Y/A book as and when it arrives, esp as someone who hasn't yet written about any plagues! Don't forget to let us know the Y/A title when it is decided.

Hello Lucy! I've never come across Forever Amber, so now I'm thoroughly intrigued by your description. And looking forward to reading your forthcoming books, which both sound great.

Hello Lucy! I've never come across Forever Amber, so now I'm thoroughly intrigued by your description. And looking forward to reading your forthcoming books, which both sound great.

Hello Lucy! I remember taking Forever Amber on A girl guide trip - on a canal house boat. The other guides were treated to my readings of the saucier pages.

Welcome, Lucy! I shall go and look for your Georgian London now, as I'm currently writing my third Georgian tale :-)

Welcome, Lucy! I have never read 'Amber' - perhaps I should. I was aware of the title, which is a fantastic one..Your YA novel sounds great!

Hello, Lucy! Good luck with Chicken House - they were my publisher many years, and very nice to work with.

When I first read "Forever Amber" as a teen, I loved it. For me, it was neither the description of the fashions nor the love story. It was the novel's ability to transport me to Restoration England with all its squalor & sumptuousness.