I recently wrote a post on another blog about an old set of encyclopaedias which I have been trying to throw away for some months. I took one out of the boot of the car for the purposes of writing the post - and soon became fascinated. Of course it was out of date - it was published at a time when there had only been one World War - and it's easy to laugh in a patronising way about a world where, for instance, calculating machines were 'wonderful little machines... for every need, from the tiny reckoner for the retail merchant who deals only with figures of five digits or less, to the amazing "duodecillion" machine, which will give results up to 40 digits'. But in fact the Book of Knowledge is like a pair of glasses that allows you to see the world in some measure as people then saw it - in particular, the new Europe which had been created after 1918, with new countries, like 'Jugo-slavia' - without, paradoxically, the knowledge of all that was to come. 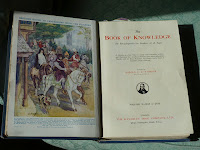 But if it's difficult, without the aid of something like the Book of Knowledge, to put ourselves back into a time  less than a hundred years ago, how much harder it is to imagine what life was like well over a thousand years ago - in the age of the Vikings, for instance. Neil Oliver has just started a series on television in which he explores recent developments that tell us more about these perpetually fascinating ancestors of ours, seeking to make a definitive move past the popular image of bloodthirsty invaders with horned helmets. (The horns are a myth, apparently, occasioned by the discovery of drinking horns in burials alongside helmets. So much for all those souvenirs in York/Jorvik...) 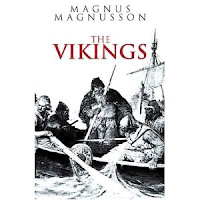 Oliver is far from being the first to take a fresh look at the Vikings, of course. I can strongly recommend a book by Magnus Magnusson, called, unsurprisingly, The Vikings, which presents a very rounded and detailed picture of the northmen as traders, explorers, storytellers and makers as well as pirates and invaders.

But, since the History Girls are all writers of historical fiction, it will surprise no-one if I suggest that the best way to immerse ourselves in another time is by reading fiction. There have been lots of novels set among the Vikings: our own Marie-Louise Jensen has written Daughter of Fire and Ice, and its sequel, Sigrun's Secret. There have been other recent offerings by Susan Price, Katherine Langrish and Pauline Chandler, and the Vikings played a guest role in my own book, Warrior King. Much less recently, Henry Treece wrote a trilogy which must have been one of the first and most popular fictions for children about the Vikings. 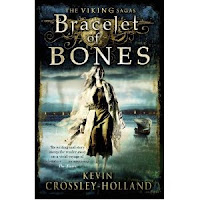 The most recent arrival is Bracelet of Bones, by master story-teller Kevin Crossley-Holland. It begins the story of Solveig, who wakes one morning to find that her beloved father, Halfdan, has stolen away in the night to follow his young lord, Harald Hardrada, to Miklagard (Constantinople). To her, Miklagard is the other side of an unknown world, yet she determines to follow him there, setting off in a tiny boat with no provisions except some water, with little on her side save her courage, her skill as a carver and her determination.

On her great journey across the Baltic and down the great rivers of what is now Eastern Europe, she meets a range of characters who help her (or sometimes hinder her): sailors, makers, an English slave, merchants... and as she does so, we get a sense of this world, of what it is like to live in it: what it looks like, what it smells like, what food you eat, what clothes you wear, how you keep warm, how you travel. Unless Doctor Who eventually shares with us the secret of time travel, we're never going to know if this is what it was really like. But it certainly seems like a convincing and richly-textured approximation - and Solveig is an appealing and resourceful heroine.
Posted by Sue Purkiss at 05:00

I'm thinking that that old set of encyclopedia are actually treasures to be, if not kept as research, passed on to someone interested...may I suggest you contact simmers@primex.co.uk who posts the wonderful blog http://greatwarfiction.wordpress.com/, that is, if it's not too late.

I think that books actually published at the time, such as your encyclopaedias, tell us more about history than a novel written now, however good ( and Kevin Crossley-Holland is very good) . When weeding my library I found some non fiction books about the year 2000, written years before. I gave them to a teacher who does a unit on the future with her English class, as an example of past speculation on our own time.

Nice collection of novels and names here, as well as the enjoyable Solveig.

Must agree that the shaping and range of the knowledge in old encyclopaedias (and similar books) is an amazingly instructive pageant about the time too. These old books so often end up thrown away, even from libraries. Sadly, with the rise of e-books, such large items seem even more likely to end up in a tip. Hope they are being kept somewhere, and not just in a single school's history archive.

Solveig's story continues in "Scramasax", in which she learns the hard truth about Viking warfare and "cunning" when she accompanies her father and Harald Hardrada on a campaign for the Empress Zoe. It's not clear if there will be further stories in the series.

Also recommended, Matthew Kirby's "Icefall", the story of another young girl called Solveig, an exploration of Viking culture through story.