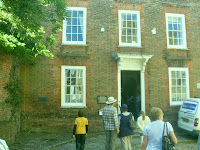 Henry James thought that these two words, Summer Afternoon, were the most beautiful in the language and it was on a perfect August day that we visited Lamb House in Rye. This was Henry James's home from 1897 to 1916. He bought it after the failure of his play Guy Domville as a kind of refuge and there he entertained everyone who was anyone in literary life of the time. The front hall of the house is hung with small portraits of his visitors and it's quite a list: Max Beerbohm, Rupert Brooke, Ford Madox Ford, George Bernard Shaw, and many, many others. Edith Wharton was a friend of his. Mrs Humphry Ward, too, and on and on. They all came to see him in this warm and elegant place, with its most beautiful garden, and I wish it were possible somehow to overhear some of the conversations that went on in the oak-lined living room, or sitting among the roses.

James wrote many of his later novels here, in the Garden Room which was destroyed by bombing in 1940. There are examples of his handwriting displayed in Lamb House and it's illegible. Towards the end of his life, he employed a secretary to type his manuscripts and it was fun to read a laminated copy of his typed letter announcing the installation of the first telephone in Rye. His number was Rye 51. 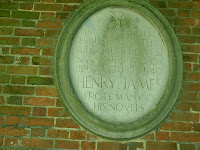 James was a very handsome youth indeed and even in his later years, he was a good-looking chap, though one photograph shows him looking a little more like a nightclub bouncer than a famous writer. We weren't allowed to take photos inside the house but I took one of the writing room while standing in the garden and it shows something of what the interior is like. 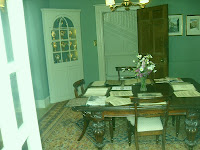 The National Trust runs Lamb House now. There are tenants who live there and look after the house while allowing the public to visit it twice a week, during the afternoon. Rumer Godden was one such tenant, from 1968 to 1973 though there's no mention of her anywhere in the house. This is a great shame, I think, as she was a wonderful writer for both adults and children. On the day we visited, you could have a cream tea on the lawn and though we didn't do that, I photographed a table and tried to imagine Edith Wharton, dressed magnificently, discussing the latest plantings with The Master. 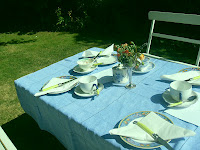 As Henry himself put it: "There are few hours in life more agreeable than the hour dedicated to the ceremony known as afternoon tea." He and I are of one mind in this matter. He didn't know much about horticulture but he loved a garden. "I am densely ignorant," he wrote in 1898. "Only just barely know dahlias from mignonette." Still, the garden that was created at Lamb House is glorious. Here are two photographs which don't really do it justice. 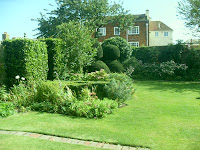 E.F.Benson lived in the house for many years after James's death. Anyone who has read the Mapp and Lucia novels knows that they are set in Rye and that they offer a unique, hilarious, and sharply-written account of the eponymous heroines and their battle for the heart and minds of Tilling (Rye) in a series of books adored by their many fans. Perhaps these stories have fallen a little out of the mainstream but for their admirers (and I'm one of them) they shine like a good deed in a naughty world. Noel Coward loved them and so did W.H Auden and their author, even though he was quite acerbic about Rye and its citizenry, was Mayor of the town three times. He also wrote ghost stories, which I haven't read, but Mapp and Lucia are his best-known creations. He makes a world entire and when you're in the town and in particular in Lamb House (Mallard House in the novels) you step into it. We went up to the top of the tower of St Mary's church and it's true that you can see into the Lamb House garden. It's easy to pretend you're Mapp spying on Lucia doing her callisthenics. The tower, incidentally, provided a couple of Vertigo moments but the view from the top was well worth it. 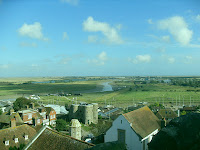 We had tea in a delightful tearoom called Cobbles. Their coffee and walnut cake is wonderful, and they have an enviable dresser. 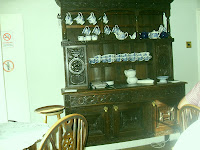 We had a perfect summer afternoon. Visiting Rye is in many ways like stepping into the past...the 1950s, say. Our friend Philip remarked that not a single brand name from the High Street has an outlet there, and that hadn't struck me but it's true. I loved the windows, both of shops and private houses and here, to end with, is a selection of some of them. 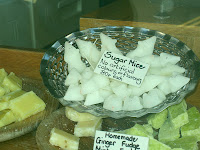 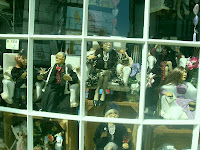 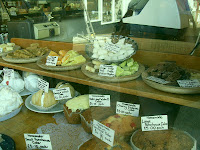 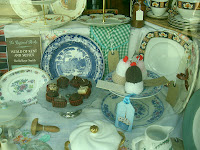 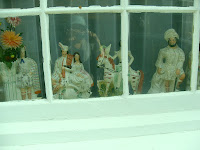 Goodness, Adele - how lovely! I've never visited Rye, but now I really want to. (And didn't Malcolm Saville set several of his children's adventure books around there?)

Such a lovely post - just right for reading on what looks like a greyer day - although it would have been kind of Lamb House/NT to include Rumer Godden somewhere.

I've never been to Rye but your post has been the BEST advertisement. Next free weekend, I'm off!

And didn't Joan Aiken write "The Haunting of Lamb House" or somesuch book?

How lovely, Adele! I have visited Rye many times, and your piece makes me want to head off there today. To add to its literary appearances: it featured in Monica Edwards' Romney Marsh stories, under the name of Dunsford, but easily recognisable.

Yes, yes, indeed...both Joan Aiken and Monica Edwards...a very literary place. Worth a visit from all and sundry.

In the 70s my parents owned a caravan at nearby Camber Sands so we went to Rye frequently, and I have been back a couple of times in adulthood. Back in the day my ambition was to eat at the Mermaid Inn (Dad always said no because it was expensive) and I checked that one off my list a few years ago by holding a big family lunch there, with both parents!

I love Lamb House, and the Citadel (the upper part of Rye) in general. So thanks for a post that brings back many happy memories!

How lovely, Jane! We ate lunch at Simon the Pieman and it was delightful!

I love that cool blue (or is it green?) interior. If they ever need a writer in residence...

I've wanted to visit Rye for years, to see "Mallards" - but had no idea that both Henry James and Rumer Godden had lived there, too. I'm not even more determined to visit! I also have the E F Benson ghost stories sitting beside my bed, waiting to be read - will get onto those soon.

Aah. That should, of course, read "NOW even more determined to visit".

Oh, I adore Mapp and Lucia, not so keen on Henry J, but M and L are a great solace to me.. I didn't know you could visit Lamb House! I must go! Lovely post, Adele!

What a lovely place! We have a Rye here in Victoria, on the Mornington Peninsula, probably named for the one in England. Linda, I read two of the Romney Marsh novels as a child and wished I could visit Sussex. I didn't know about Dunsford being Rye. Of course, it would have changed by the time I was reading the books. ;-) Adele, is it just me, or have you specifically chosen cake displays for your photos? :-)

Thanks for all comments! You can apparently visit Lamb House on Tuesdays and Saturdays after 2 pm in summer. Don't know about Winter openings. National Trust website will tell all. Leslie, au reservoir!

...and if Susan P recommends the ghost stories, then I know they'll be great!