I spent this weekend at the Children’s Writers and Illustrators ‘Joined up Reading’ Conference organised by The Society of Authors . The Conference is a wonderful chance for authors to get together, catch up with old friends, make new ones and attend various talks and sessions about writing related things. There was a good showing of History Girls (past, present and (maybe) future) and many of them came with me to a session on Sunday morning run by authors, Gillian Cross and Elizabeth Laird. 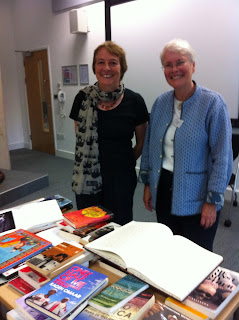 The title of the session was: The Art of the Soluble: how do I ferret out what I need to know? Gillian and Liz are very experienced, highly acclaimed writers. They have won major prizes, been short listed for everything, written I don't know how many books between them on all sorts of subjects. Neither is 'grand', although they could be; neither show any trace of arrogance, although in terms of achievement and reputation, they have every right to do so. They are the opposite: disarmingly modest and generous to a degree.

I like them both enormously, but what I admire most is their courage.They are brave writers committed to following the idea, no matter how difficult, or how big a challenge. They are also very versatile. Following the idea means that neither of them will be pinned down to one genre, one age group, one subject. They are also pretty fearless. They don't back away and they don't back down.

There are lots of things to be scared of in writing, mostly to do with different kinds of failures from minor to epic, and it's good to know:

a) That other writers feel this way.
b) What they do about it.

Gillian nailed the first, confessing to feeling 'terrified' when she first had the idea for Where I Belong, a book that was going to involve Somalia and Fashion when she knew almost nothing about either, but once she had the idea, it wouldn't let her go, so she set about finding out. This is what she does, no matter what the subject or setting: going to libraries, Amazon, AbeBooks, the internet, talking to people, watching films, studying maps and clips on YouTube, building up information, gathering detail, until she's got enough to write with accuracy and authority. As she spoke, the table in front of her piled up with maps of the Horn of Africa, fashion magazines, every kind of book from Somali poetry to The Devil Wears Prada as well as the fashionista's mood book she kept while writing.

As for b) (see above) Liz Laird said that we have to find what we're frightened of, face it and do it anyway, because the idea won't go away. She speaks from experience. Her novel A Little Piece of Ground was written from a Palestinian point of view and some of the responses to it were extremely hostile and deeply upsetting, but she knew that might happen and had to deal with it. Liz added her own material to the growing heap on the table. Not least, a volume of the diary that she has kept for many years. This is a uniquely personal and valuable personal resource. She doesn't have to wonder what she was doing on a particular date, she knows, so she didn't have to struggle to remember the incident that sparked her book, Oranges in No Man's Land, all she had to do was go to the appropriate diary. 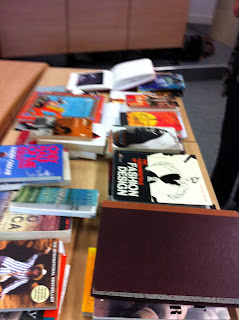 Neither writer was at all 'precious' about the amount or kind of research they undertook for their books, whether they were writing contemporary or historical fiction. They did not really differentiate between the two forms, using similar resources for both. Liz warned against including too much research when writing historical fiction, citing the lack of period detail in Jane Austen. If J. A. didn't feel the need to fill page after page with minute descriptions of dress and modes of transport, then maybe the historical novelist should take a leaf out of her elegant notebook. On the other hand, a thorough knowledge is vital. Gillian mentioned the writer, Jill Paton Walsh who, to her horror, discovered a vital piece of information which could have invalidated an entire historical novel. 'What does it matter?' someone said to her, 'No-one will know.' To which she answered, 'I will know.'

This is a blog about historical fiction so I have to mention the closing speaker at the Conference,. Allan Ahlberg. He is a writer who combines all kinds of qualities: modesty, playfulness, courage, intelligence, wit and grace. I regard his book, Peepo, as one of the great works of historical fiction and it never fails to make me cry. 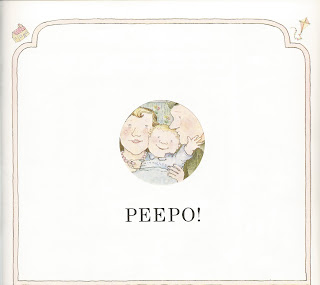 The Art of the Soluble was a truly inspirational session, full of information, ideas, courage, lightness, generosity and humour. Thanks to Gillian and Liz - and you for reminding me just how enjoyable that short hour was. Wished it could have continued for much longer.

Thank heaven too, for Alan's talk - all three parts of it, including the toast to everyone involved in the making of a book - which was a poignant reminder of the real relationship between the author and the audience, the speaker and the listeners.

What a marvellous report on how great writers work. Really inspiring and informative. And I love that you took pictures! Thanks for this, Celia!

(I must go to one of those CWIG conferences!)

The Art of the Soluble was my favourite session of the weekend. I knew nothing about Liz Laird and came away staggered at her adventurous life and wanting to read all her books.

Sounds fab.Wonderful report, Celia and wish I could have been there in the flesh!

I wish you'd been there, too, Adele. You'd have loved that session. And i completely agree, Penny. Allan was so wonderful and reminded us all that great books are written out of love, not for money, prizes or epos figures. He was a real inspiration. I just hope Wilf didn't give him too much of a hard time.

I too loved Allan Ahlberg's session, and though I didn't go to Liz and Gillian's session, I wish I had: and your account just confirms what I came away thinking: ALL the best and most life-and-work-affirming sessions were run by the creative people - the writers and artists. The others, meh.