The Earl of Bothwell – mad, bad and dangerous to know? by Theresa Breslin

James Hepburn, the fourth Earl of Bothwell, 3rd husband of Mary, Queen of Scots, was a strong minded man and a fiercesome fighter who had wardship of some of the Scottish Border country which made up the “debatable lands” that lay between Scotland and England. He was a useful ally of the Scottish monarchs in that not only did he patrol the Border lands trying to keep the peace between the families who lived there, he could also rally thousands of Border men to his standard. His castle, still present at Hermitage, gives an indication of the type of fortress needed to withstand constant attacks. 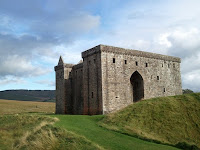 When the Reformation began in Scotland Bothwell supported the Protestant cause, but also remained loyal to the crown and the legitimate heirs to the throne. This gave him massive problems because the reigning monarch, James V, had rejected the ways of England’s Henry VIII in breaking from Rome and closing monastic houses. When James V died his French wife, Marie of Guise, remained Catholic, as did their daughter, the child who was to become Mary, Queen of Scots. Mary’s return from France as a naive teenage Queen with no experience of ruling a country was an opportunity for any ambitious nobleman of intellect and cunning to exploit the opportunity to gain power.

Mary’s illegitimate half-brother, James Stewart, (later Earl of Moray) was a ruthless character who saw Scotland’s future as being tied closely to England. When Mary married Lord Darnley both Moray and Bothwell realised that their influence over the young Queen could be usurped by Darnley’s family. James Stewart sought the support of England’s Elizabeth I who was happy to provide money and arms to more than one of the Border families in order that they might make war with each other and reduce the chance of a Scottish army threatening England. Elizabeth also gave shelter to Moray and his fellow Scots Lords when they rebelled against Mary’s rule. In this Moray’s outlook was directly opposed to Bothwell’s and they clashed on many occasions.

Bothwell’s method of dealing with Border strife was brutal but effective. He personally led raids and on one occasion shot his enemy out of his saddle. Unfortunately Bothwell didn’t make sure the man was dead before approaching him and suffered almost fatal stab wounds. It was while Bothwell was recovering at Hermitage Castle that Mary, hearing he was dying, made a day-long perilous trip across rough terrain to visit him. It was this that convinced people she had more than a passing romantic interest in Bothwell. But he was a noted womaniser and it’s unlikely that she saw him as serious suitor to be the consort of a Queen.

Down through the centuries historians have argued and novelists explored Mary’s relationships with the men in her life. Investigation and research has never conclusively proved that Mary definitely knew of the plot to assassinate her husband, who was now causing scandal enough to threaten the throne. Both Moray and Bothwell were implicated in the murder of Mary’s husband, Lord Darnley. Then Bothwell forced Mary to a marriage which she immediately regretted and both their fates became locked together, hurtling towards disaster. 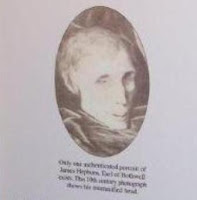 The Earl of Bothwell…. Definitely dangerous to know...  More than a little bad…

And mad? Bothwell died insane after being chained to a post for years. His death mask makes disturbing viewing. Surely no one deserves to die in such a fashion?

Spy for the Queen of Scots
http://www.theresabreslin.co.uk/
The Edinburgh World Writers’ Conference  debates are online with the Conference now moving to different venues around the world. In November Theresa will be with Melvin Burgess to debate themes in Krasnayarsk in Siberia. You might like to join in!
Theresa Breslin and Kate Leiper will discuss research for the Illustrated Treasury of Scottish Folk and Fairy Tales, at events in EDINBURGH in October.
Divided City – in conjunction with the Citizens Theatre. A schools production is now underway in South Lanarkshire with performances scheduled for 2013 in Hamilton Town House Theatre.

Posted by Theresa Breslin at 01:00

Email ThisBlogThis!Share to TwitterShare to FacebookShare to Pinterest
Labels: Earl of Bothwell, Spy for the Queen of Scots, Theresa Breslin

This is very interesting and you know so much! Thanks for sharing and yes, non one deserves to die like that. Dreadful stuff.

Ooh - I definitely want to know more about Bothwell now. Strange, because I've always seen him as a villainous figure, but that death mask is so horrific I'm finding my sympathy immediately swinging in his favour.
Thank you for a fascinating post.

Thanks for comments and apologies for delay in replying - was in remote northlands as this was posted. I too always had him down as a vile rapist and philandering murderer until I began to read up on him for the book. Histories about the Border reivers in those days make the criminal gangs in our big cities seem positively gentle by comparison! His positive qualities were his unswerving and intense loyalty to his men, to his country, and to Mary. And I pity him his death for he would have rather died years earlier with a sword in his hand.