Down Memory Lane, by Laurie Graham 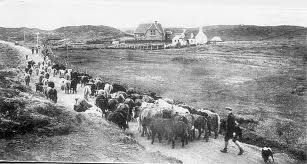 Sometimes a writer’s research crosses the path of their personal history and for me this happened recently in a quite literal sense. Researching the coaching inns of the Great North Road I wandered off-topic a little and discovered, to my joy, that a track I remember walking nearly sixty years ago is a remnant of an ancient drove road.
As a child I was often sent to stay with relatives on the Rutland-Lincolnshire borders. The reasoning was that country air must be good for an asthma sufferer. And apart from the pollen, it was. My grandfather took me mushrooming and pigeon-shooting and walked me miles every day. It didn’t cure my asthma but it made a walker of me. One of our favourite routes was from the village of Sproxton towards Skillington and then along a gentle track to Buckminster and back to Sproxton. That track was the Sewstern Drift, one of England’s oldest drove roads. In its day it would have been an alternative to the costly Grantham turnpike, with the bonus of providing good grazing for animals on the move.
Britain has a wealth of old pathways: packhorse bridges, salters’ tracks, drove roads. The Sewstern Drift, like most drove roads, was wide and grassy. It had to accommodate large herds. I also remember it as being filled with wild flowers  -  the source of my award for Second Year Infants Best Pressed Flower Collection. But I digress…
The drove roads declined in the 19th century, when the railways began to provide a quicker way of getting fatstock to market, but in their heyday the animals were driven mainly from the west and the north towards London and to the victualling yards of the Navy towns. Sheep from Yorkshire, black cattle from Wales. Indeed I now have a clue as to why my Welsh ancestor ended up in Rutland. I suppose he lodged a night at a Drover’s Inn and some buxom wench caught his eye.
The Sewstern track is likely to have carried traffic in the opposite direction too: East Anglian geese and turkeys going to the Michaelmas Goose Fair in Nottingham. Like me you may have heard of geese wearing little boots to spare their feet on the long march and wondered, if you have any personal experience of geese, how such a thing could ever have been accomplished. In fact it seems this story got a bit garbled. Geese were actually driven through puddles of warm pitch and then through oyster shell sand, to give their feet a tough protective surface. It was pigs who wore the boots. They had leather soles and knitted tops, rather like those cardigan boots that are fashionable today.  Cattle were shod by blacksmiths at points along the route, two half-moon iron plates per hoof. They were called called cues. And you don't put cues on a bullock the way you shoe an obliging horse. Each animal had to be wrassled to the ground. You begin to see that droving was no quiet, bucolic stroll.
The drovers generally rode on horseback, though some walked, and all had dogs to help them keep the herd together. A good droving dog knew the route so well it could find its own way home. Every animal has its travelling speed. Cattle could cover fifteen miles in a day, with pigs you were lucky to manage six. Geese moved faster than turkeys, because they have the ability to eat on the move. I can vouch for this. When we had a house in the Dolomites we used to invite our neighbour’s birds down to clear our land of slugs and snakes. The geese treated it like an Arby's Drive-Thru. Gulp, gone. But the turkeys lingered, chatted, digested. The Slow Food movement made flesh.
I'm so delighted to have found out about the Sewstern Drift. I wonder now if I liked it because it was so worn and trodden and loved, if it somehow spoke to me through the soles of my little five-year old feet. A fanciful idea, probably. But returning to the subject of soles, I would give quite a lot to see some 18th century pig boots. Find me a pair. I’ll pay.
Laurie Graham's latest book is A Humble Companion. Read a review HERE and find out more about her at her at lauriegraham.com
Posted by Laurie at 01:30

I'm lucky enough to live in Wiltshire - and often walk alone the Ridgeway, a path stretching back to iron age times. I love the drove roads - often muddy now, and shaded by banks of trees. And I love the little paths that people would have used to walk to church - I'm no churchgoer, but cannot wriggle round an old kissing gate without thinking of giggling young women and their swains!

I love this post! Thanks so much for sharing your memories and knowledge. Looking forward to more stories of your time in the Dolomites and Venice.

What a lovely post! I've been researching pack horse trains and early coaching recently (mainly on the Great Western Road) so this really strikes a chord.

Yesterday we were driving up the A1M and passing signposts that wore some of the names you mention here.

I always rejoice in the thought of the drovers roads - and felt wistful when a deserted drover's inn near Fountains Abbey burnt down recently and the site erased. Though I am also sure the life was harder and less charming than the one in my imagination. (Now the grass is full of flowers rather than dung, for a start.)

Did you find any particularly useful"droving" books or sources, Laurie?

Thank you for a lovely vision of pigs in boots - very swashbuckling. Laurie, you are so good with your hands: surely you can make some pig boots yourself? I imagine the originals were destroyed by the Great Marches and splashed with mud or worse.

This post caught my imagination as I also love old trackways and drovers roads. I come from the Yorkshire Dales (haven't lived there for a long time, though) and I have a book called Roads and Trackways of the Yorkshire Dales by Geoffrey Wright, which I've much enjoyed. I wouldn't normally mention a book I've had a hand in publishing but you might find it of interest. It's 'A Lost Frontier Revealed' by Alan Fox and has Sewstern Lane on the cover (all the places you mentioned figure in the book's index). It's about ancient geographical divides which went on to shape the way communities and transport networks and so on developed -- all focused on the Sproxton/Shillington area.

Thanks for the recommendation, Jane!

There's also a book on the subject by Shirley Toulson, published by Shire Books. I haven't seen it yet but it looks worth a try. This can be the trouble with research. Way leads on to interesting but time-consuming way!