The Devil in the Boot by Karen Maitland

This is the first blog post from our new History Girl, Karen Maitland, You can read about Karen on the About Us Page. Welcome, Karen!

One of the joys of being historical novelist is that you never quite know what the next email is going to contain. It might be a snippet of folklore or a reader sharing their excitement at having found a medieval jeton in their garden. (A disc which once would have used on a chequer board, to make financial calculations, hence the name Chancellor of the Exchequer.)

But one of the nicest emails I’ve received recently was from John Winter, editor of the metal detecting magazine The Searcher. His blog, by the way, is a wonderful source of curious historical information. John had read my novel, Company of Liars, which features a chapter set at St John Shorne’s shrine in North Marston in Buckinghamshire. John Shorne was a hugely popular medieval English saint, attracting pilgrims from all over Europe in spite of the fact that the Pope obstinately refused to canonise him. A local vicar, John Shorne is most famous for capturing the devil in a boot and thereafter the boot was said to miraculously cure gout. 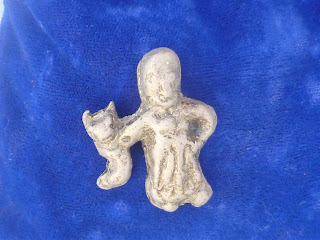 In the novel, I’d refered to the legend that St John Shorne’s shrine is said to be where jack-in-the-box toys were first invented for sale to pilgrims, taking the form of little devils that could be made to pop-up out of wooden boot. I also mentioned the pilgrims badges from the shrine made of lead or tin, which have been found all over Europe.

John Winter told me that when Shorne’s well was restored in 2005, local historian, Michael Finnemore, presented all those who’d helped with the renovations with a replica pilgrims’ badge showing John Shorne holding the devil trapped in the boot, identical to the ones the pilgrims would have bought as holy souvenirs in the Middle Ages. When John generously offered to give me his own precious badge  I nearly bit his hand off. 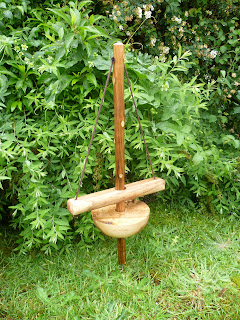 I love surrounding myself with genuine or replica medieval articles when I write. Just to hold these things, whether it’s a coin or a bow string made of hemp and beeswax, helps me to feel, smell and see what exactly what my characters would have done. A friend recently made me a Saxon drill, which works on a pumping action as the cord twists and untwists. I discovered that once you get a rhythm going, it bores through wood as easily as a wasp-sting pierces human flesh. In fact I’m now using it in place of a modern drill; it’s far more effective. Drills like these would have used in all sizes from huge ones in the shipyards to tiny ones used by medieval physicians to drill bone. But just using the drill teaches me what illustrations or descriptions never could – which muscles in your arms and shoulders really ache afterwards! 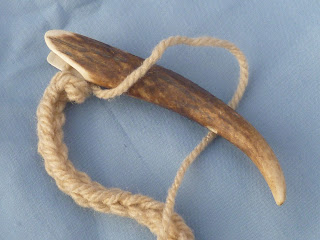 Sometimes even learning to use a medieval tool inspires a whole novel. That was certainly true when I taught myself to use a Viking lucet, an ancient cord maker, made from deer horn. That gave me the idea for a dark and deadly theme in my new novel Falcons of Fire and ice. There’s only one problem, using a lucet is totally addictive. My current cord is over fifteen foot long and I can’t seem to stop weaving. I suppose I could always try knotting it into a medieval rabbit net – did I mention one of my characters my latest novel goes ferreting? Now, does anyone know where I can get a spare ferret? 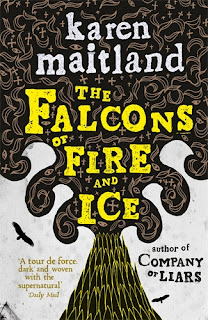 Thanks, Karen, I have wandered over to John Winter's blog and bookmarked it for later enjoyment. I do Gree with you about the usefulness of touching, smelling, doing historical things. I love cooking mediaeval and for a couple of years I was in the Society for Creative Anachronism, where I exercised my own muscles, learning what you can and can't do fighting with sword and shield! ;-)

Welcome to History Girls, Karen. I am a big fan of your books and getting this additional detail is a treat. Can't wait to read Falcons of Fire and Ice. Which is super title, btw.

What a lovely post - I'm now longing to try a Saxon drill. And I love the cover of 'Falcons of Fire and Ice' - must add it to my list!

Welcome, Karen! I am just about to start your Owls and can't wait. The lucet does look rather addictive. Much more so than the nasty whiteware we play with today like toasters, blenders and juicers.

Hi Karen, I've loved all your books and am looking forward to reading Falcons of Fire and Ice. This blogpost highlights how and why we readers are drawn into the medieval world you describe so well!

Thank you Karen. I have enjoyed reading your first post ... incidentally, although I write every month in the The Searcher magazine, I am not the editor. :-) That accolade belongs to a very enterprising lady called Harry Bain. Yes, you read correctly. Sometimes truth is stranger than fiction.

As you know, you are only the second female author to attract my attention since Jane Austen disillusioned me over 50 years ago. What an admission ... and not one that I am proud of!

Just finished 'Falcons', enjoyed it very much, and awaiting the next medieval adventure. No pressure then!

Thank you to everyone for your really lovely welcome to The History Girls. Delighted to know there are some other novelists out there who try out what their characters do, though I have found you have to be a bit careful with the saxon drill, libraries are not keen on you accidently drilling through their tables in a fit of enthusiasm at book talks!

Many apologies to Harry and John for mixing up their roles, but they both do a wonderful job. Incidently, if you want to read more about St John Shornes shrine and see some great photos of the devil in the boot - John wrote a piece about it at http://www.johnwinter.net/jw/2011/12/the-mystery-object-explained/

How can one find or create a Viking lucet? How to use it? I am fascinated!