That title's a bit of a liberty. I don't think Bill ever made it to Blaenau, but he did get to Porthmadog, not far on a fast pony. And the culture of pre European America is something that many people, not just the Welsh or the not white are fascinated by.

This is one of those stories that sits at the back of your head and you know, one day, you'll write about it, but so far I haven't quite worked this one out. But I've looked at this picture below loads of times and wondered what the story was. 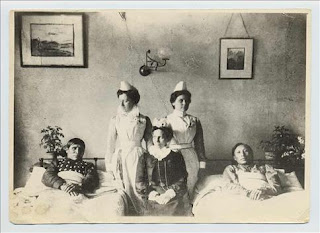 This photo is from Conwy Archives. It was taken at the Llandudno Cottage hospital in 1904 and shows two Native Americans ill in bed. I presume the rain got into their prairie bones.

The men were part of Buffalo Bills' Wild West Show which toured Europe many times. Can you imagine it? The farthest northwesternmost corner of Wales, full of farmers and quarrymen and their hard working wives. Can you imagine the  horses, men, women, sharpshooters, chammy leather, boots with silver spurs?

What a change from plain whitewashed chapel walls, hills with no trees, nights lit by rushes and fires made of peat?

When I first heard about the visit I imagined a kind of rain lashed wagon train strung out along what is now the A5 from Cerrig-y-Drudion to Pentrofoelas over the most boggy of Welsh mountains. I presumed the gentleman in the photo getting very bad flu and diverting up the Conwy valley.

A sort of wetter, colder, Oregon trail, only without snakes.

Of course the truth is much less exciting. They came by train. Which is why making it into a story would be much more exciting.
Posted by Catherine Johnson at 19:22

Love this! What a fantastic photo. What an intriguing situation. I do hope you write about it one day, when the time feels right. I'd love to read it...

Oh there must be a great story to go with this! What a great photo.

I love seeing old photos and imagining the story behind them! :)

How wonderful! I learnt a lot about Buffalo Bill on a recent trip to Denver, where he's buried and to Cody in Wyoming. Lots of good books on Amazon for your research.

My family history links my great grandparents to Ffestinog and my great aunt has written a story about the family there. My great grandmother and family immigrated to Kansas in the 1890s. I was born and raised in Leavenworth Kansas. Buffalo Bill spent part of his youth in and around Leavenworth and Leavenworth still celebrates "Buffalo Bill Days". I would love to send you a copy of the family histoy in Ffestinog. Let me know if you are interested. My email address is BTS727@SBCGLOBAL.NET. Thank you.