One of the joys of being a writer is that you have a job that includes all the best roles in film making.  The script writing part is obvious.  As director, you plan the story, the look of your concept, set the tone for the whole.  You cast your movie without having to worry about including the latest flavour-of-the-month hottie even if he is not suited to the part.  The only fly in the ointment preventing this being a one person show are the equivalent of the studio producers and distributors: the publishers and the shops. But, hey, I suppose us authors have to be kept in check somehow, don't we?

One of the jobs I enjoy most is location scout.  Sometimes this is straightforward: I have an idea and go and seek out the places that I know I am going to use.  For example, when writing about Tudor London, I took the decision to include the first theatre - helpfully known as The Theatre - in the third book of the series.  I had the star-crossed lovers idea at the heart of the book.  The heroine was to be a daughter of an early English Puritan household so her opposite is, naturally, one of the players.  In this era, Puritans denounced the stage as the work of the devil and blamed them for all social ills and the earthquake of 1580 with which I start the book (The Rogue's Princess).  The Tudor theatre is not hard to find thanks to Sam Wanamaker's Globe.  Although located north of the river, The Theatre was the same structure that was dismantled and reassembled as the Globe (see a brilliant account of this in James Shapiro's 1599), so a trip to the South Bank was obvious.


Some research trips take a little more planning.  I'm now writing a two part series for the anniversary of the outbreak of World War I.  The first part, called Dusk (out Summer 2013), entailed a trip to the Somme area.  If you are interested in this period, I can't recommend too highly the museum at Peronne. As well as a clear narrative, they have full kit for different kinds of soldier, officers and men, laid out as if for inspection and lots of very personal items that bring the individuals into focus. 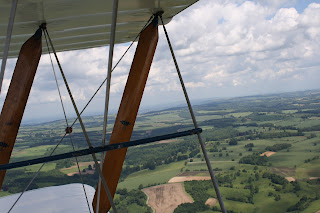 For the second part Dawn (which I'm in the process of researching at the moment) I intend to use some of the experiences of the early aviators.  Well, naturally, there was only one thing for it: find out what it was like to fly in an open cockpit.  I went up in a Tiger Moth in June - designed in the Twenties so fairly close to the planes my characters would use.  I hope you like the full Amy Johnson look.  And to prove that, yes, I really did go up, here's a shot from the air.  It may look as if I'm the pilot but in fact I'm in the observer's seat - the pilot sits behind in these two-seaters.  Alex, my guide for the day, entered into the spirit of the thing as we looked for 'Jerry' over the Cotswolds. 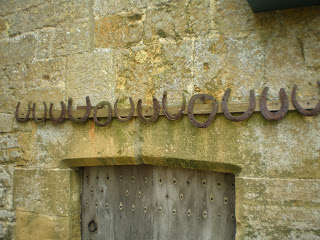 These were planned locations but very often the chance-met location inspires the story that follows.  We are fortunate in the UK to live in a country seeded liberally with little historic gems.  The manor at Snowshill owned by the National Trust provided me with unexpected inspiration when I went there with my family on an Easter egg hunt.  It suggested what life in the ranks below the highest would have been for Tudor gentlemen.  It wasn't the manor itself but the hidden corners that spoke to me about the texture of this life - here the studded nails and horse shoes.  This set the tone for my inner director and was used in The Other Countess.

Perhaps you have a favourite location.  If so, do tell me about it.

Good luck with your scouting, Eve. Locations,planned or found, are truly one of the pleasures of writing, and your Tiger Moth flights sound such intense experiences.

I agree with your "film-making" analogy but must add that I find there's almost a sense of acting the characters oneself to get it right: how did they move here? what would they have been doing with their hands then? what would be worrying them now? and so on.

It feels like inhabiting the persona whilst writing the pages. Or - she gulps - is this a power complex too far?

Location scouting is one of my favorite things about research. I love to see the sites of favorite books, too.

I live in the midwest in the States, so I've been to a couple of Civil War battlefields and lots of pioneer-type places. I've also travelled to the California coast to research a shipwreck for one of my WIPs.

Last fall I was in London. That was so fun to be at the various places I've read about or seen on television.

I love that you went up in the bi-plane. That was brave!!

What a fabulous post -I loved it. And yes, I'm well and truly immersed in the Somme myself -the whole of WW1 & 2. Please tell me how you got to fly in a Tiger Moth? It might just come in useful for me soon.
Best wishes
Suzy

I got the ride, Suzy, by buying it at an auction of promises. Piece of luck for me that it came up.