Your Guides to Paris circa 1910 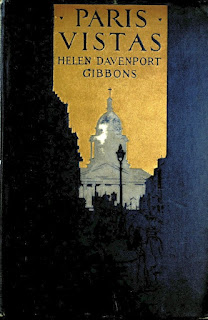 One of the pleasures of writing about Paris during the Belle Époque has been spending hours flicking through the city guide books of 1907-1910 with their fuzzy photographs of treasures of the Louvre and their precise instructions on how to use the omnibuses. Many of the cafés and restaurants they describe are still there today from the opulent excess of pressed duck at the Tour D’Argent to the cheap and bustling Chartier in rue Montmartre. It’s the personal touch that you need to get a real feeling for a city though and for my picture of Paris I have to thank in particular two American writers who have been my guides; Helen Davenport Gibbons and Adelaide Mack. I admit there is much of Paris they ignore, the dark, the complex, the violent, the grim side of sexual and class politics but as guides to the human experience of the brighter side of the city, they are superb.

The eye of the interested traveller is a great boon to a historical novelist. The curious stranger will always notice those details which make a location unique and which the locals will tend to ignore. Perhaps it’s no surprise then that I found a great deal more useful information in ‘Paris Vistas’ by Helen Davenport Gibbons and in ‘Magnetic Paris’ by Adelaide Mack than in Proust.

Gibbons was not a stranger to the darker aspects of life, soon after her marriage she witnessed the massacres of Armenians in Turkey and wrote about them in ‘The Red Rugs of Tarsus’, but ‘Paris Vistas’ is a joyful and amused account of her time in the city filled with affectionate portraits of both the French and the expat community. Gibbons also has a fantastic chapter on the floods of 1910  and as they form the backdrop to the denouement of my novel that was an enormous bonus. Her three thousand words on the drama of the rising waters have been more useful to me than the collection of hundreds of photographs of the floods available. That ‘a picture is worth a thousand words’ thing doesn’t always hold true if the words are well chosen.  She captures the mixture of excitement, fear and confusion in the city rather brilliantly: 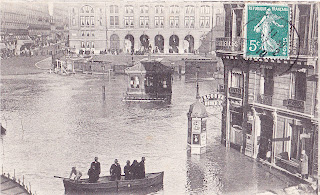 "Newsboys were crying extras : "The river still rises !" We were in darkness.
No lights on the Avenue des Champs-Elysees. An engineer regiment was fighting
the water in the Place de la Concorde by the light of acetylene lamps. The wheezing of an old pump taking water out of the cellar of Maxim's was the only sign of life on the gay Rue Royale."

"We saw strange sights that night, wooden paving-blocks floating in a messy jumble; a few restaurants endeavoring to dispel the gloom with candles; soldiers with fixed bayonets guarding the inundated quarters. It was bitter cold and the glare of their fires was weirdly silhouetted in
the rising waters, mingled with the shadows of deserted houses."

‘Magnetic Paris’ by Adelaide Mack is the literary equivalent of a breathless monologue delivered with a lot of hand gestures. You have to just sit back and enjoy the performance. All I know of the writer is that Adelaide Mack was the pseudonym of Flora Adelaide Mclane Woodson. If anyone can tell me more about her, please do. The book is perhaps not for admirers of Eric Hazan; Mack has no apparent interest in the history of the city and though she notes the condition of the poor and the dubious morals of the French in general, she does no more than shake her head over the former, widen her eyes slightly over the latter and then charges on with her fantastic, colourful images of the street life of the city. Her prose is full of the sort of precise details that frankly make me want to kiss her:

While you are at luncheon, you will hear a weird squeaky pipe, not unlike a bad imitation of the Scotch bag-pipes. This announces the approach of a knife- 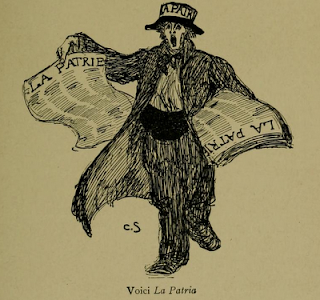 sharpener. An hour later, as you are closing your
eyes for a half-hour's rest, you hear drifting up to
your window first a man's throaty, "Le tonneau,"
which is followed immediately by a woman's voice pitched a key or two higher, "Le — tonn — eau," laying great stress on the last drawn-out syllable. They have come to take away your empty wine-case or tub.

or:
The camelot belongs to the boulevards and is al-
ways an amusing and diverting feature. He is nimble of foot, as well as of tongue. He is an inventor, is shrewd, good-natured and honest, is usually a half-way comedian, is almost a Mephisto for ingeniousness and never fails to afford entertainment to the clientele of a cafe, the waiters of which always are his friends. He will suddenly deposit on your table a black poodle carrying a blue-bead basket in his mouth, and by the aid of a rubber tube and bulb attachment the poodle is made to sit up, shake hands with you and walk across your table. He has furry rabbits which hop about and wiggle their ears; fighting cocks running up and down his extended arm, performing monkeys on sticks, and painted rubber faces which, by squeezing, you can change into all sorts of grotesque, hideous and leering expressions. He has for sale the latest toy of the hour and will cut out your silhouette or make a charcoal sketch of you for five cents.

You can just see it. The Book is also wonderfully illustrated with caricatures and portraits of the Paris scenes that Mack is describing. Thanks to the wonder of the Internet you can now find and read online (enjoying all of the illustrations) both of these books at the Internet Archive.

Paris Vistas can be found following this link, and ‘Magnetic Paris’ is here.
Posted by Imogen at 01:00

What a brilliant post. All those things people never mention, but are the ones you want to know about. The happy hours I've spent reading Theodore Zeldin and Andrew Hussey for those moments of revelation. I clicked on the links, but unfortunately they didn't work, not sure what to do about that. Will try googling them. Thank you for early morning wonderfulness.

Thanks, Christine! I think I've managed to fix those links now, but you will certainly find the texts with google too,

Positively my favourite EPOQUE!! I wish I'd lived in Paris between 1880 and the Great War. What clothes, apart from anything else!!Lovely post.

Fascinating - but where did you find these books? So full of detail and atmosphere - both your post and the original books.

Thanks! Sue, I found a mention of Paris Vistas in a modern book on the floods. Magnetic Paris I found trawling through the Internet Archive...

It's wonderful what you can find on the Web! Myself, I have a terrific local bookshop where I found Alice B Toklas's book about living in France from around this time to WWII. Not quite like the two treasures you mention, but fascinating, as are her recipes, none of which I would make now, with all the cream and fat, but which she'd a light on how people ate in that time and place.

Whoops, that's "shed a light". It's the iPad reductive thingie!

Thank you for the fixed links, I'm bookmarking them for when I have time to read them, they look wonderful. The main character in my next novel moves unwillingly from London to Paris in 1895 and they will be very, very useful. Thank you.

I have downloaded Paris Vistas from Project Gutenberg, very readable so far.