I write this really only because I want to put up this picture. This is Herschel Greenszpan.

Herschel was an eastern boy, seventeen years old. He had been born in Hanover in '21; his father was a Polish tailor with three children dead already out of six. Hershel was clever; he was lazy, he had a good memory and a hot temper. He was dark, sickly, religious, proud.

On the Sunday, November 6,  he’d had a big fight with his uncle Abraham, known as Albert, of Maison Albert on the rue des Petites Epicuries. Herschel’s papers had expired. Papers were essential but no-one would provide them. He wasn’t German, though he had been born in Germany, and he wasn’t allowed to be Polish though his parents were, and though he was living in Paris he couldn’t be French because France wouldn’t have him. Without papers he had to leave but nowhere - including where he’d come from - would let him in. Also, he needed money: he was forbidden to leave France with it, or to arrive anywhere else without it. But even if anyone had any to send him, it couldn’t be brought in. He could not do this without that being in place, but that was banned to his kind.

He had been staying in the chambre de bonne of the flat that Abraham had left because it wasn’t safe for the family to stay there unless they threw the boy out  - and they couldn’t do that - why not?  Well, look at him, 100lbs if that, vulnerable and furious, with his eyelashes and his ulcer and his won’t-work-on-the-Sabbath and his four-days-to-leave-France. It would be a hard-hearted uncle who could bring himself to throw a boy like that out.

A postcard had come from a cousin, Bertha, at Zbaszyn on the Polish border: Herschel’s family - his mother, father and the remaining siblings - in Hanover had been grabbed from their home with nothing and dumped in the woods  - thousands of people dumped there, foisted on the Poles before the law could be changed - nothing to eat and what cash they had been able to bring taken from them at the border. They had been there two weeks and did not know what was going to happen, or indeed what had happened. Bertha had crossed out where she had written could they send money. She knew they couldn’t send money.

In the course of the row Herschel had stormed off. His friend Nathan went after him to calm him down, and they spent the day together till Nathan had to go home. Herschel went to the Tout Va Bien for something to eat. Uncle Abraham and his brother went there looking for him, later, but the waiter said he’d left an hour before. He had gone to a little hotel in the boulevard Strasbourg. The staff remembered him, so young. They noticed his lamp on, late into the night in the little room.

On the Monday, which was rainy, he drank black coffee and smoked and went to a small shop he had passed the night before, where he bought the gun. When he arrived at the German Embassy, the clerk told him he was in the wrong place, to go to the consulate. Herschel was so used to being in the wrong place, so used to perfectly good places becoming the wrong place by virtue of his presence in them, that he declined the advice and insisted on being seen. The clerk in the end sent him up to see Ernst vom Rath, let him deal with the boy.

Herschel shot vom Rath, five times. He said later that he didn't know whether he was going to shoot himself, the diplomat, or the picture of Hitler on the wall.

Vom Rath died two days after the shooting, on the 25th anniversary of the foundation of the Nazi Party. Many dinners and celebrations were being held across Nazi territories, and so, when the news broke, it was simple for the Nazi leaders all to ring each other up and unleash a spontaneous patriotic response, a firestorm of riot, theft, murder and kidnapping which came to be known as Krystallnacht. ‘The Jews’, according to the logic, had brought it on themselves. 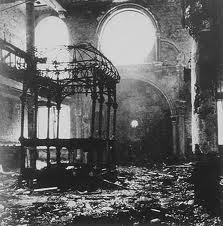 There is much more to Herschel's story. It's even more depressing. One thing touched me: a journalist in New York, when setting up a fund to finance Herschel's defence, would not let Jews contribute. She said, if there are no Jews contributing, the Nazis can't say the fund is a cabal, a Jewish plot. 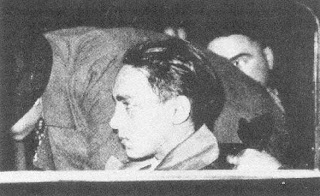 It's pretty depressing really, although there's not much about Nazi Germany that isn't depressing. It was all so easy to do: simplistic solutions applied to complex problems and administered by a society that was used to the triumph of order over chaos. If the rule of law gets in the way then you change the laws.

Michael Tippett's oratorio "A Child of Our Time" was inspired by Herschel's story. Your top picture is on the cover of the score I have - absolutely haunting.

I did know this story but it's great to see it here. Thanks Louisa.

I have sung in A Child of our Time many times, including the Polish première and the 5oth anniversary performance, that Tippet attended. It never fails to move. Thanks for the reminder.

Thank you for this, Louisa.

Thank you, Louisa - a haunting story so well told.

I had never heard the story of Herschel before. Thanks for telling it, and telling it so well.