The dreadful Story of Stephen and his Aunt Matilda (or Maud)

The moment Stephen came to the throne it was realised that he was a mistake and had been christened wrong; thus everything was thrown into confusion.

Stephen himself felt quite uncalled for, and even his Aunt Matilda was able to take him in when she began announcing that she was the real King. Stephen, however, soon discovered that she had been malchristened, too, and was unable to say for certain whether her name was Matilda or Maud…

I remember the moment when, in my student days, a friend informed me that Maud and Matilda were essentially the same name. I was fascinated. But why should it have been so significant to me? I wasn’t even studying the Empress Matilda (or Maud). The answer is that Maud (or possibly Matilda - no, no, Maud) was at that time my favourite name. And names – first names, that is; ‘given’ names or Christian names, as they are often called – had long been a particular interest of mine.

As a child, I planned to have six daughters – principally for the pleasure (or power?) of naming them. I made lists, repeatedly, of what these girls would be called. I remember that after reading the very brilliant Charmed Life by Diana Wynne Jones I decided that my eldest daughter would be called Gwendolen, even though she’s not an awfully nice character in the book. It didn’t matter – I liked the name.

(Gwendolen, lovely though it is, didn’t stick at the top of my list. Maud – when it arrived several years later – did, and my eldest daughter bears the name with, I’m relieved to say, pleasure and pride.)

As for exactly how and why Maud and Matilda are the same name, I’m not enough of a linguistic expert to give you my own explanation, and explanations I’ve found elsewhere come in slightly different (and no doubt overlapping) forms. I've read that Matilda is the Latin form of the Saxon name Maud, and I've read that Matilda comes from the Germanic name Mathilidis, of which one shortened form was Mahald and another was Mahaut… which brings us very close to Maud. On a subtley different tack George Redmonds, in his excellent book Christian Names in Local and Family History, explains the connection as follows:

"[In some cases] a name may have been revived in relatively recent times and given what has been called a ‘learned’ spelling, one that is far removed from the medieval pronunciation. That is true of Matilda and Agatha which are familiar to us now only in these learned forms. The evidence for their earlier pronunciation is in such vernacular spellings as Mald or Maud or Matill for Matilda and Agace or Agass for Agatha."

…although it strikes me that this question of pronunciation must surely be muddied by the difficulty of telling, in some cases, what is a vernacular spelling of the full name and what is a diminutive, especially since medieval documents seem often to have called people by their diminutives. (There seems a bit of a gulf, for example, between Mald and Maud on the one hand, and Matill on the other.)

Notwithstanding my inevitable desire for more detail on the name Maud George Redmonds’ book is absolutely fascinating, and I recommend it to anyone interested in the history of first names. Though it discusses names right up to the present day, and contains material covering the whole of Great Britain, its particular focus is on England in the period 1200-1700. 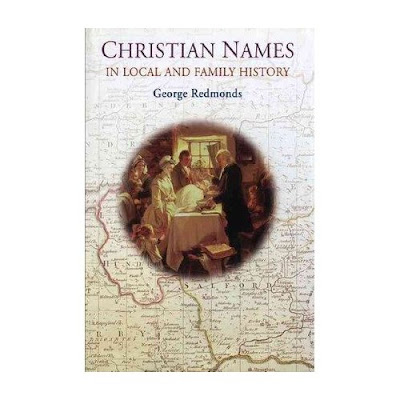 It is tantalising to think we might be able to hear spoken words from the past, and so I’d like to venture beyond vernacular pronunciations of Matilda (or Maud), and look at some more of the examples Redmonds offers. He says (and I've read this elsewhere too) that the likely pronunciation of the name Agnes, for example, is represented by spellings such as Annis or Annas - lovely, I think! And they are, not surprisingly given the post-Conquest Norman influence, much closer to the modern French pronunciation for Agnès. Similarly, the name Henry seems to've been pronounced Herry (not far from the French Henri). Reynold was a vernacular version of Reginald and Pers of Peter (or Piers, essentially the same name). Sander or Saunder were shortened versions of Alisander or Alisaunder, spellings which Redmonds says give us the medieval pronunciation of Alexander. The spelling Wauter, too, gives an indication of the pronunciation of Walter (which makes the short form Wat, as in Wat Tyler of Peasants’ Revolt fame, more understandable).

Pet names, or diminutives, are a fascinating topic in themselves. Some of those that Redmonds discusses are familiar to the modern reader and some are not. In the medieval period Alison was pet form of Alice, Marion of Marjory (or possibly Mary) and Dick or Diccon of Richard. So far, so recognisable. But Philot was a common pet name used for a person called Philip (who could be of either gender – Philippa was simply the name Philip rendered into Latin, with a feminine ending indicating that this was a woman called Philip; the equivalent of Ricardus for Richard). Using the same -ot ending, much as we might put an -ie or -y on a name today, Magot was a pet version of Margaret, Annot was a diminutive of Anne or Agnes, and Mariot another version of Marjory or Mary. Using a different pet-name ending, Jenkin was one of several common diminutives of John (this particular one, Redmonds says, was often used to denote the younger of two siblings when both were named John – but more of that intriguing situation in my next post), and Perkin or Parkin was a nickname for Peter.

Since many surnames derive from first names (Johnson – John’s son – for example), it’s interesting to realise that many diminutives that are no longer in use have been preserved in surname form, such as Jenkins, Perkins, Parkinson, Saunderson, Watkin and Philpot.

In my next post I’d like to come on to which names were most popular in medieval and Tudor times (there may be a few surprises), plus the historical version of celebrity name choices. Yes, while Brooklyn (eldest son of David and Victoria) Beckham was reportedly named after the place where he was conceived, Castilian Morris was named during a Roundhead siege of Pontefract Castle, where his father was a colonel in the defending Royalist army. Oh, and then there’s the 15th-century lord who named his sons Tristram, Rainbrown and Troilus…

H.M. Castor's novel VIII - a new take on the life of Henry VIII - is published by Templar in the UK and by Penguin in Australia. It is now available in paperback, hardback & ebook format.
H.M. Castor's website is here.

This is wonderful! I love reading about the backgrounds of names, though the truth is, when you get hold of a baby name book, there are rarely any two that give you te sme background for the meanings, have you noticed? This book sounds great, though, will have to see if I can get my local bookshops to order it in rather than buying on line.

Thanks Sue. Yes, I have noticed that - and what's impressive about the Redmonds book is that it's so meticulously researched. A proper history book - a million miles away from those baby name books! (And hooray, yes, go to your local bookshop - good on you! I only put the Amazon link because I couldn't find a publisher's link.)

Marvellous! How wonderful to call someone 'Rainbrown'; it sounds like and Elf or an Ent or certainly something you'd never get away with at school! I shall look forward to the next post on this subject!

And of course the pronunciation 'Water' for 'Walter' was why Elizabeth I, wth her penchant for giving her courtiers flirty nicknames, called Walter Raleigh her 'Ocean' - and why he then wrote that poem to her, 'The Ocean's Love For Cynthia' when trying to get back into favour after marrying without her permission...

Loved this, and look forward to the next post on it.
My mother told me that as a child she lived next door to a large family who named their children like this: Abagail Mary, and then Mary Abagail; Alice Joan and Joan Alice, Richard Thomas and Thomas Richard,, and so on through seven children.
My own extended family was thick with people named Joe, Alice and David, which led to whole conversations about nothing except whether something had happened to Big Joe's Little Joe's Alice or Joe's Alice's Joe's Alice... It could get quite heated.

In 'Names through the Ages' I see that 'Maud' means battle strength as an English name and has the same meaning in Ireland and in Wales. Also in France. Matilda has the same connotation. I hope your little Maud never has to prove it!
lovely post, thank you.

Thanks Harriet. One of my favourite subjects. And as someone who has trawled through hundreds of Johns and Annes I know how thrilling it is to find something out of the ordinary in the family tree.

Fascinating post! I'm ever so slightly obesessed with names, and love finding out more about where they came from. Especially the unusual ones!

Thank you all for your lovely comments. Yes, of course, Kath - I'd forgotten about Walter R.! Susan - how interesting (if confusing!) that your family has had such clear naming traditions. And many thanks, Michelle, for your good wishes to my Maud. Mark - sadly, in the name-index of the Redmonds book there is no 'Harriet' between 'Harry' and 'Hate-Evil' (one Puritan name that I think I wouldn't have liked to be given). But I do remember as a child - and the youngest person in a household of seven - I was pleased to learn that Harriet, as it comes from Henry, means something like 'head of the house'.

Wonderful! Names are endlessly fascinating and can make all the difference to a text. Think of Dickens!

Fascinating! I understand why names were shortened, such as Debbie or Deb for Deborah. But, it boggles me when there are pet names that are totally different from the full, such as Hank for Henry or Jack for John. And why was it so common for families to give multiple children the same first name? Was it because child mortality was so high?

Thanks Harriet, that sounds perfect!

Deborah - great questions, and I'm going to be looking at possible reasons why more than one sibling was given the same name in my next post (Oct 12th). I'm going to try and do a bit of digging about Jack (etc) too. Watch this space! And many thanks for commenting.