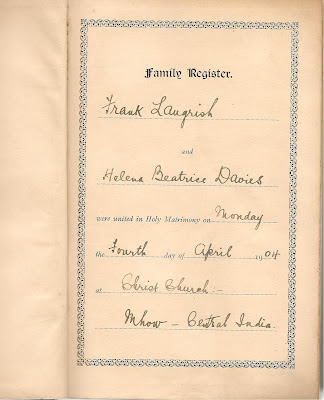 Here is the first page of the family Bible which belonged to my grandmother Helena Beatrice Davies (known as 'Bee') who was born in 1888 in India, and who was married – as we see – on Monday April 4th, 1904, at Christ Church, Mhow, Central India, to Frank Langrish.
Here they both are. He was in the Royal Horse Artillery. 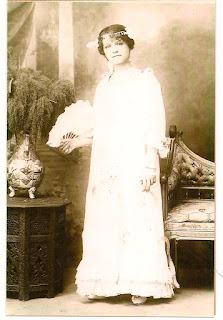 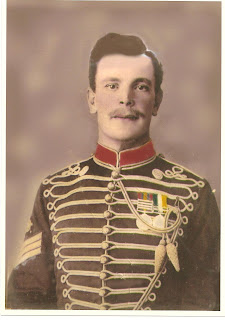 And here is she.  I wonder if the Bible may have been a wedding present?

And the Register goes on in the same handwriting – which I think is probably Frank’s – to record the birth of their daughter Beatrice Kate (known as Kitty) and my own father George.  And then you come across a photograph of my grandfather in later years, and then you flick through some coloured plates, and then you reach Genesis 1,1:

An old family Bible has more about it even than the ringing cadences of the Authorized Version, however. It was once the most important book in the house. Other books were never placed on top of it.  It chronicled lives. In ours, if you turn to Leviticus, Chapter 15 (something about the uncleanness of women), this small dark photograph has been tucked between the pages.  It's a couple of inches high, an illustration of a kitten being chased up a tree by three dogs.  Maybe it was Kitty’s? 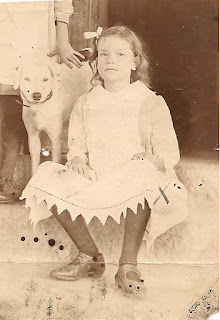 In Hebrews, 7, there’s a loose photograph of a pretty little girl of about six, who must be Kitty herself. She was killed in India on January 4th 1916, aged 11, in a carriage accident, on the birthday she shared with my grandmother.  My grandfather was with the army in Mesopotamia.

At the very end of the Bible, slipped between the flypaper and the back cover, there’s a photograph of my father aged about seven or eight, possibly the year his sister died. On the back is written: 'Our George.' I don't think my father would have cared to appear in a blog, so I'm not going to post his picture...
In Joshua, 9, in which the Gibeonites make peace with Joshua, there’s a sprig of pressed purple heather, crumbling slightly.

In Nehemiah, 13, where Nehemiah demands, “Why is the house of God forsaken?’ there’s a small newspaper clipping of a poem: ‘It Makes A Difference’: 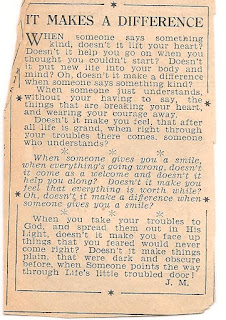 My grandmother, everyone agrees, could and would talk to anyone and everyone, and would often have put this advice into practice.

By Psalm 43, there’s another small newspaper clipping: ‘A very pleasant evening was spent at ‘J’ Headquarters on Thursday last, when Mr W C  Morse, on behalf of the Wardens, presented a wristwatch to Mr F J Langrish, who had been compelled to resign the position of Head Warden for health reasons. A bunch of flowers was also presented to Mrs Langrish. …Mr Langrish thanked the wardens for their kindness to him and his wife that evening, and he very much regretted that he had to accept his doctor’s advice, but any success he had achieved in the Group was only made possible with the co-operation of the wardens, who were at all times very willing to do their utmost to help him.’

It's hard to date this, but it's likely to be some time during or just after WWII.

In  John, 14, there’s a prayer by Patience Strong (whose purple-covered Year Books my grandmother collected each Christmas) and in John, 17, there’s a Christmas Card. 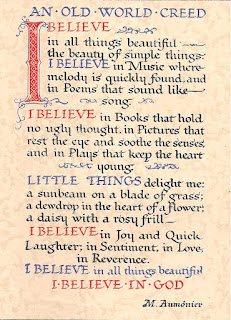 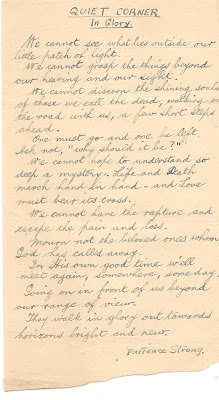 In Corinthians, 13 (‘For now we see through a glass, darkly, but then face to face’) , there’s another Patience Strong poem, 'A Quiet Corner In Glory', copied out by hand perhaps by some friend, and preserved:

‘We cannot see what lies outside our little patch of light. We cannot grasp the things beyond our hearing and our sight. We cannot discern the shining souls of those we call the dead, walking on the road with us, a few short steps ahead. One must go and one be left.  Ask not, ‘Why should it be?’ We cannot hope to understand so deep a mystery…’

Not great poetry.  But it clearly gave comfort.

In Job, 40, in which the Lord answers Job and says, ‘He that reproveth God, let him answer for it,’ there’s a piece cut from the bottom of a handwritten letter which someone has written to my grandmother:

‘…but I just go out and call on someone, or go to a picture, or just for a walk, and as you say, Frank is nearer you there, it’s the companionship you will always miss, like me you were so very happy, still Bee dear, we all have to meet that, one or the other has to go first…’

On the other side, there’s a PS which was clearly the reason she clipped the piece out of the letter:

‘PS: And now there are no more moments of earthly bliss to spend, no more of all that was so dear, no more dreams around the bend, I often think, how can I live without you, and you enjoy Heaven without me, but there is but no answer to it all.  God is with you and me. LC.’ 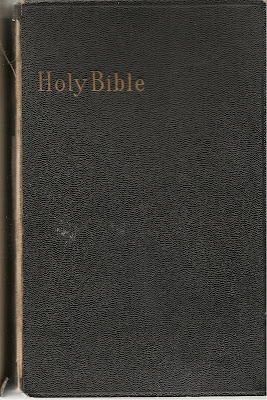 What an amazing history-in-a-bible! Thank you so much for sharing it.

What a moving post, Kath. And what a precious family record that Bible is - and clearly a treasured item in itself for so many years. Wonderful post.

A total stranger and far away over the sea, yet I feel I too must thank you for sharing this with such a tender simplicity. We are all residing somewhere in the web cloud now, and you have brought your parents with you there. Somehow I think of this as brave and generous.

A lovely piece. Thank you, Kath.

What a beautiful record of family history Katherine. Unique, and very moving.

What a treasure, Kath, both your family bible and your article about it. Thank you for sharing :)

Thank you for such a lovely post. How interesting that your family history was there inside for you to find.

Thank you - that was very moving.

Thank you all for your comments - I did find the experience of looking through this Bible very moving.

How wonderful to have these precious memories all tucked in there! Of course, in Edwardian and Victorian times you didn't smile in a photo. Among other reasons, I assume it just took so long to get the picture taken that it would be a bother to grin at the camera so long. I have a photo of my own grandmother that must have been taken in the same era, in a long coat, but that same sepia portrait style.

Your grandmother's Bible contained interesting artifacts in it.

What a treasure you have in your keeping, Kath!

A treasure indeed. Thanks so much for sharing this with us.