They Dog Our Footsteps, by Leslie Wilson 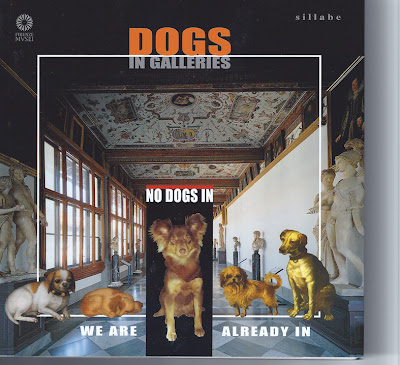 When I was in Florence recently - oh, the bliss! and doing the gallery-crawl, as you do! I bought a lovely little book called Dogs In Galleries. I think what sold it to me was the humour of the jacket  - but it did get me looking at representations of dogs in art. The day after I bought the book, I took my husband to Pisa, to see the Campo dei Miracoli, because as far as I am concerned, the Baptistery there is the most beautiful building in the world. But there, as well as a sublime simplicity and beauty of proportion that goes straight to my heart - 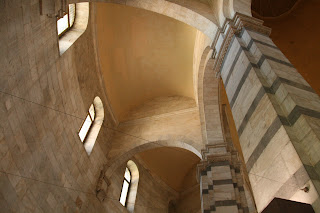 I found dogs. More than I expected, too, There was one in a stained-glass window in the Baptistery - here it is - 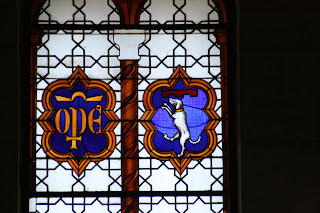 and even before we had entered the Baptistery, we had found dogs acting as gutter-spouts on the outside of the Cathedral. In the course of the day, we found rather a lot of dogs, and not just hunting dogs, either, as you might expect, but also dogs living indoors with sculpted families, and little lap-dogs too. 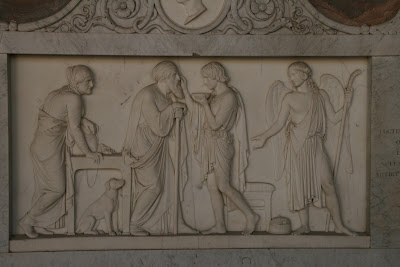 This dog - in the cloister - is beneath the table where Tobias, I think, from the Book of Tobit, is restoring his sight to his aged father. There was no label on the bas-relief, but I'm sure I'm right.  There's the Angel on the right. Beneath a table is just where the dog would be, hoping, no doubt, that someone would shortly put something out to eat, and then a bit of it might drop down. People will sometimes tell you that dogs always used to live in kennels outside, but in medieval times,  I was taught at school, they were there, waiting to get the bones people threw down after they'd finished gnawing them for themselves. In other words, they were waste disposal operatives, just as my own dog is, and very useful when there is spilled food to mop up, or when my twin grandsons are eating finger food in their high chairs.
But look at this dog, on one of the doors of Pisa Cathedral. 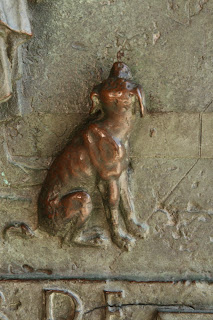 It's a scene of the Adoration of the Magi and the dog is looking straight at Jesus, as if the artist, in contradiction to the official doctrine of the Church, had given him a soul. The dog knows that this baby is special, quite different from any other baby, and is gazing at him with joy. I'm not being sentimental here, just considering the import of that fixed canine gaze.

After all, dogs have evolved into a special relationship with us that is perhaps unparalleled in the natural world. They are descendants of wolves, and share, I think 98% of their genetic material with the wolf - but they aren't wolves. 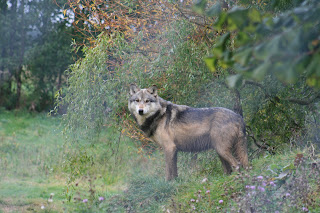 A wolf may be raised by humans, it may even  become very friendly with humans, but it won't have that instinctive desire to please humans that a puppy has. It remains a wild animal. I recently read a very interesting book by John Bradshaw called In Defence of Dogs. I discovered that studies have been done of feral dog populations that show that dog behaviour is essentially different from wolf behaviour, even if the dogs don't live with humans. The wolves who became dogs, even, Bradshaw says, were probably different from today's wolves, who bitter experience has taught to be extremely shy of human beings. But at some stage - no-one knows exactly when - somewhere - grey wolves approached human camp fires and became hangers-on of the human race.

I watched a television programme once that suggested the socialisation was initially done by children. Having raised one puppy with kids at home, and the second one, our current dog, without resident young of our own, I think this is extremely likely. It is much harder work to bring a puppy up if you don't have children around to help. Admittedly, my young, when the first dog came among us, were over ten, not tinies. However, our current dog, Matilda, adores our young grandsons, and is staggeringly tolerant of crawling babies doing things to her that she would object to, strongly, from adults. We have to keep a sharp eye out, not so that she doesn't hurt the babies (they are twins, a double hazard!) but so that the twins don't hurt her.

But leaving the personal anecdotes aside; dogs must have revolutionised human society, in their many helpful roles as herders, hunting dogs, and guard dogs. If the agricultural revolution led to population explosions, what was the contribution to our ability to feed ourselves of dogs who applied their lupine skills to helping the hunt, and guarded sheep, cows, and goats from their wild cousins? 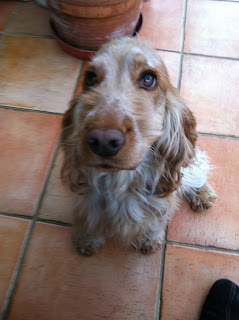 When I walk with my own dog, Matilda, I often have the feeling that I have been walking thus, with a dog companion, for thousands of years. There is an antiquity in the relationship that is no sentimentality. And those of us who feel more truly themselves with a dog friend, are surely inheritors of a symbiotic relationship that is part of our humanity. Even those who don't want to have dogs - like my mother-in-law - have china dog ornaments or pictures of dogs on their walls.

Dogs have been buried with their masters and mistresses, mummified - in the Museum in Cairo I saw a mummified Saluki dog, quite recognisable as the kind that run round in the streets of Cairo nowadays. A beloved and skilled hunting dog, maybe. It's amazing to see it.

I leave you with another image from Pisa, of a spaniel doing what spaniels do, wriggling into the undergrowth to come out, covered in grass-seeds, bits of twig and goose-grass no doubt, to flush the game for its master. The posture and activity are so accurately-observed, you can almost hear the dog panting and barking, maybe, and see the tail furiously wagging, because for this animal, business and pleasure are one and the same thing. 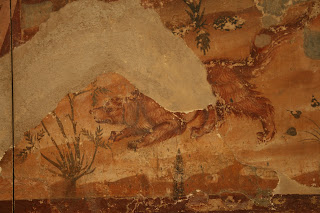 All photos by Leslie or David Wilson.

(We need to keep this post strictly separate from yesterday's!)

Quite so. Or maybe just keep the subjects apart...

Enjoyed this post - I love the dog on the door in Florence: so beautifully done!

in my mind the bas-relief of the dog under the table and the gutter-spouts became one glorious image - great post, thanks!