April is the coolest month by Mary Hoffman


So, T. S. Eliot might have got it wrong. The month we are just beginning, as well as hosting my birthday, has all sorts of literary and social associations.

It begins with April Fool's Day, when tricks can be played on people - at least till noon, after which they rebound on the trickster. Particularly rewarding is spotting the jokes in the morning's newspaper. I well remember the Guardian's excellent 1977 Report on the Island State of San Serriffe (actually two islands in the shape of a semi-colon): "terrorism has been almost eliminated from the beaches." But this kind of joke has been played for far longer:

I wonder how many people turned up?

Brewer's Dictionary of Phrase and Fable (2nd Revised Edition 1981) suggests that the custom might derive from the Roman Festival of Cerealia, held in April. Ceres sought in vain for her abducted daughter Proserpina, responding to "the echo of a scream" - or being on a fool's errand.

I'm not sure I entirely believe in this theory - since the Cerealia was held in mid to late April and lasted a week.

Maybe it was Geoffrey Chaucer who drew attention to the specialness of my birth month by pointing out that it was then that people began to long to go on pilgrimages. That might not be experienced by many these days but there is still perhaps a sense of beginning and fresh starts in April, and not just because a new tax year begins on the 6th. (1st in Japan).


And of course it's the month of Aries, the first sign of the Zodiac so another beginning association. I've always really enjoyed being an Aries, even though some would like to deprive me of that designation and tip me into the Sign of the Bull. Nothing wrong with Taureans but I'm absolutely not one of them, lovely phlegmatic souls that they are.

Aries is a Fire sign, like Leo and Sagittarius, and this is typical of the sort of star-sign descriptions you find: "one of the most highly charged masculine energy signs in astrology. No wonder women born under Aries are forceful, dynamic and aggressive, and as a result these Aries women frequently find themselves with dilemmas surrounding their romantic relationships." 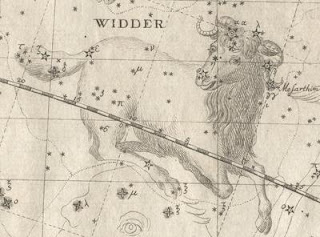 I count myself fairly dilemma-free in that department but really identify with the ambitious and dynamic associations.

I used to wish that my mother had hung on for a bit so that I could have been born on the 23rd, April's noblest association, definitely the death and by convention also the birthdate of William Shakespeare. But then I wouldn't have been an Aries. I wonder if Shakespeare was postmature? He doesn't seem very Taurean to me.

In the United States, April is:
I'm not aware that any of these is celebrated in the UK  but someone will tell me, I'm sure.

Easter usually falls in April but not this year. One year my birthday fell on Good Friday, which felt very odd and we postponed the celebrations. Next year it's on Easter Sunday - I imagine chocolate eggs will feature.

Tell us your favourite month and whether you live up to your star-sign description.
Posted by Mary Hoffman at 00:01

Autumn is my favourite season, so living below the equator that makes it late March/April. I love it cos the weather is more settled than spring and not so hot/humid as summer.

I share the same birthday as you, not sure if I match up too well to aries. I can be forceful and dynamic & medically I have too many androgens so haven't been a girly girl (but aren't masculine either)