Horsing Around: Functions and colours of the Medieval horse in the 12th and 13th centuries


I was one of those horse-mad little girls.  I spent a lot of my childhood either making up stories in my imagination about horses and ponies, or galloping about pretending to be both the horse and rider at the same time.
I was something of a nerd about their colours and collected books and posters and trawled the library for pictures and information.  I was a seven year old who knew my bay from my chestnut, my blue roan from a strawberry roan, and that white horses were always referred to by equine types as greys!  I spent many happy hours identifying breeds with my Observers Book of Horses and Ponies, on the way discovering that the ancestor of the warhorse more resembled a Welsh cob or a Villanos heavy Andalucian, than a modern Shire, whatever commentator Dorian Williams said about Shires and Clydesdales at the Wembley Horse of the Year Show.
Those childhood obsessions stood me in good stead when I began writing historical fiction set in the Middle Ages, for what was a knight without his destrier and his palfrey? The common soldier without his all purpose rouncy? The merchant without his pack horses? The baron without his chazur for the hunt, and the farmer without his trusty, plodding stott to draw his plough and pull his cart?

12th century chronicler William FitzStephen gives us a view of a London horse market in the reign of Henry II.
"On every sixth day of the week, unless it be a major feast day on which solemn rites are prescribed, there is a much frequented show of fine horses for sale. Thither come all the Earls, Barons and Knights who are in the City, and with them many of the citizens, whether to look on or buy.  It is a joy to see the ambling palfreys, their skin full of juice, their coats a-glisten, as they pace softly in alternation raising and putting down the feet on one side together."

This description is fresh and immediate. You could be there among the crowd.  Palfreys were high class riding horses.  You find them mentioned as gifts in the accounts of the period. Want to bribe or sweeten the king?  Give him a palfrey! When an earl's son was knighted at court, the fond father was expected to donate a palfrey to the royal marshal. Lesser barons were expected to donate a saddle at the very least. Knights would ride palfreys and only mount their destriers (warhorses) when it came to the point of battle. William Marshal's uncle Patrick of Salisbury was slain in an ambush while riding his palfrey before he could arm himself and mount his destrier.
Palfreys were also used as riding horses by highborn ladies.

Back to William FitzStephen:
"Next to see the horses that best befit Esquires, moving more roughly, yet nimbly, as they raise and set down the opposite feet,  fore and hind, first on one side and then on the other;

Lesser mortals such as squires and serjeants would ride more basic mounts, often referred to as rounceys.  These were the all purpose riding horses of the period. When William Marshal's destrier was killed in a battle during the time when William was a junior knight of no status, he had to sell his cloak and make do with a rouncey which cost him 22 Angevin shillings. An ordinary every day riding horse known as  a'haquenai' was also known.  Not particularly large, it was often the kind that was hired out.  Interestingly, Henry II had a mistress whom a chronicler refers to as 'Hikenai'.  I suspect a connection!

"Then the younger colts of high breeding, unbroken and high stepping with elastic tread, and after them the costly destriers of graceful form and goodly stature with quivering ears, high necks and plump buttocks.  As these show their paces, the buyers watch first their gentler gait, then the swifter motion, wherein the forefeet are thrown out and back together, and the hind feet also, as it were, counterwise.

Note the 'plump buttocks'. The requirement of the warhorse was to produce short, explosive bursts of speed over limited distances, and that power house was in the rump. Think American quarter horse for the sort of constitution.The warhorses of the 12th century were not enormous great beasts in terms of height. Equine historian Ann Hyland has calculated them to have been around 15 hands high, which is perfectly adequate. They were designed for the short, sharp shock, rather like steer-roping horses today, and not for haulage like the modern heavy horses such as Shires and Clydesdales. 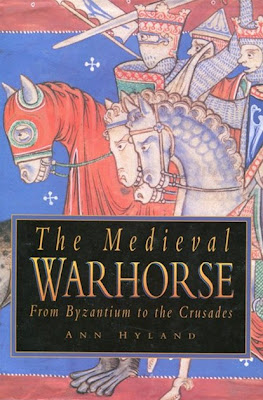 Knights were expected to have three destriers to their string in the time of Henry I. This would increase down the years.  By the time of the Hundred Years War, a banneret needed five horses, a knight four, and a squire three.  In the reign of Henry II the standard price for a warhorse was £2, although there are incidences of animals costing more than £6. In the reign of Richard I, two horses from Lombardy cost £38 13s 4d and 5 Spanish warhorses were bought for £40.  Lombard stallions were seen as being top of the range, but no one is exactly sure what they looked like.  William Marshal was delighted to capture one in a tourney he attended, but the only description of it we have is that it was a Lombard and the context makes it evident that it was highly prized.

When a race between such trampling steeds is about to begin, or perchance between others who are likewise, after their kind, strong to carry, swift to run, a shout is raised, and horses of the baser sort are bidden to turn aside.  Three boys riding these fleet-footed steeds, or at times two as may be agreed, prepare themselves for the contest.  Skilled to command their horses, they curb their untamed mouths with jagged bits and their chief anxiety is that their rival shall not gain the lead.  The horses likewise after their fashion lift up their spirits for the race; their limbs tremble, impatient of delay, they cannot stand still.  When the signal is given, they stretch forth their limbs, they gallop away, they rush on with obstinate speed. The riders, passionate for renown, hoping for victory, vie with one another in spurring their swift horses and lashing them forward with their switches no less than they excite them by their cries."

Although the above refers to destriers, it is likely that the chronicler would have included the horses built for speed, hunting and endurance among them. These were as prized as palfreys.  In the Anglo Norman tongue, this sort of horse was known as a 'chazur' or 'chaser.'  We find them given as gifts and as sweeteners on charters.  When John Marshal sold his estate at Nettlecombe in 1158, part of the agreement involved the handing over of a 'chazur.' Think the ancestor of the modern steeplechaser.

In another place apart stand the wares of the country-folk, instruments of agriculture, long-flanked swine, cows with swollen udders, and wooly flocks and bodies huge of kine.  Mares stand there, meet for ploughs, sledges and two-horsed carts; the bellies of some are big with young; round others move their offspring, new-born, sprightly foals, inseparable followers.'

This is interesting because it shows that by the mid 12th century the horse was being used as a plough beast as well as the age-old use of oxen.  This was partly down to the production of a new horse collar that would not press on the plough horse's windpipe.  Common plough horses were known at Stotts.  The name Dobbin   meant a farm horse by the 16th century and comes from the medieval fashion for giving creatures human names - for example. Robin Redbreast, Jenny Wren, Tybalt the cat - which became Tibbles. Horses started out as Robin too, but it swiftly changed to Dobbin and came specifically to mean a workhorse.

Medieval horses may have had pet names, but they rarely come down to us.  Mostly when mentioned in lists and chronicles, they are listed by their place of origin or their colour.  So Shakespeare's Richard III declaims 'Saddle White Surrey for the field.'  There are exceptions.  The hero Roland's horse is called Veillantif, meaning 'Valiant' and in Italian 'Brigliadoro' or 'Golden Bridle'  but usually the colour is the dominant description.  One of William Marshal's destriers circa 1170 was named 'Blancart' suggesting he was white.  Richard the Lionheart's favourite horse was called 'Fauvel' which tells us that it was a golden or tawny colour, perhaps a golden dun or what are today called buckskins or even palomino. Morel horses were either very dark brown or black - think of morello cherries today. Bai horses were bay and if they were 'bayclere' were bright bay. and a 'sorel' was a chestnut. A horse that was 'Ferraunt' ws iron grey.  If it was marked with spots as large as an apple it would be 'Pommele'.  An iron-grey horse with these markings would be a 'Ferrauntpommele'.  A 'Grisel' was a grey. A piebald, like today was of two different colours, strictly speaking black and white.  The royal Marshal was entitled to every black and white horse captured on a battle campaign.  The reasons have been lost, but the distinctive markings must have played their part. A roan was a horse of mixed colour, frequently white and red.  A mingling of chestnut and white would produce what the medievals called a ronsorel.
I'm definitely still a nerd!

Welcome to the History Girls, Elizabeth! And thank you for starting off with such a cracking post on medieval horses.

Fascinating, thank you! I love the different names for horses.

Thank you Mary - it's my second post tho'. There was one last month on Eleanor of Aquitaine's non brother. I'm enjoying blogging at The History Girls and reading everyone else's posts too. What a wonderful mix of subjects!

What a wonderful post and such a wealth of information! Thank you.

Even the names are like poetry - though part of me did think of young boy racers and their souped-up cars and the top of the range vehicles praised in glossy adverts.

Of course there was! And very fine too. But I worry that I might not have thanked you for it. The last few weeks have been very frantic.

How fascinating! And I was told as a kid that the medieval warhorse was the ancestor of modern cart=horses, so it is really interesting and illuminating to find out that this was not the case - and I'm glad, somehow, never liked the idea of Henry V on a Clydesdale.

Horseback riding lessons are a great way to connect with nature. Once you are used to riding a horse, you'll find it quite exhilarating and even relaxing. You'll experience special bond between yourself and the horse that your ancestors enjoyed for thousands of years.