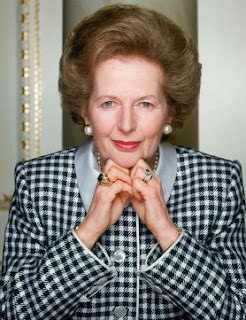 I was going to blog about something entirely different but I've just been watching the funeral of Margaret Thatcher. I wasn't meaning to, you understand, but I was caught by the ceremony of it all, the black draped drums, the gun carriage drawn by six black horses, the half muffled bells, the measured tread of the coffin bearers, the soldiers lining the route with their heads bowed and arms reversed. It was a historic moment and they don't come all that often, these great state occasions which we 'do so well' as David Dimbleby likes to remind us. The last funeral for a British Prime Minister conducted on this scale was for Sir Winston Churchill, the honours then done by Dimbleby Senior. A dullish day, I seem to remember, all in black and white, of course, the soldiers in great coats, mourners in top hats and tail coats, with the coffin arriving by river, all the cranes dipping in recognition. No cranes now, only the soaring towers and winking lights of Canary Wharf. A different time, different age. That was definitely history. The world has changed since then.

The gun carriage made its slow way towards St Paul's accompanied by ragged applause and cheers from the crowd. I don't remember people clapping and cheering before. It was more bowed heads and respectful silence. But perhaps that kind of quiet, deferential behaviour has passed into history along with the cranes of the London Docks. The route took the procession down Fleet Street, past signs for Starbuck's, Macdonald's, Costa Coffee, Subway. Change again. If the cameras had panned up a bit, they might have caught the fading titles of the great newspapers whose offices used to line this street which is still our defacto name for the press. The newspapers are not there any more - gone to Wapping and the very term 'press' is obsolete, gone with the old printing presses and the ruthless destruction of the skilled print workers who worked them, swept into history by Mrs Thatcher, along with the mines and the miners' unions, the steel works and steel workers and most of British manufacturing industry. She was a tidy woman by all accounts. 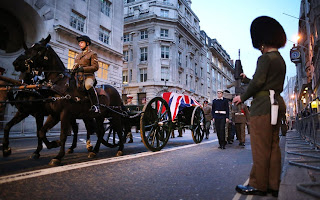 It is fitting, perhaps, that the route took her next into the City. Up Ludgate Hill past the towers of steel and glass, home to the 'new' industries, released by the Big Bang of 1986. The financiers and commercial lawyers, the banks and insurance brokers, all now spilling out of their offices in shirt sleeves, smart phones and cameras at the ready, to witness her passing and register their presence as part of it to message, tweet, post on Facebook. An unimaginable technology in the 1980s when cameras used film that had to be developed and mobile phones were the size of house bricks.

On she went to St Paul's Cathedral, where the half muffled bells tolled loud and soft to mark her passing and the great and the good waited for her, her coffin carried up the steps by representatives of  the different branches of the armed forces who lost men in the Falklands War. So they took her into St Paul's, into the presence of the assembled congregation, her family, the Queen, the Archbishop of Canterbury, British politicians, assorted world figures, Henry Kissinger,F. W. de Klerk, and all sorts of others from Jeremy Clarkson to Terry Wogan. To Be A Pilgrim, Love Divine, All Loves Excelling, I Vow to Thee My Country, prayers and readings and the timeless simplicity of the Book of Common Prayer Funeral Service.

Then she was borne out to those raggedly cheering crowds and put into the back of a waiting hearse,  her last public moments over. Whatever one thought about her, loved her or hated her, she made history and shaped it, now she was being taken off to become part of it herself.

How interesting, to use the funeral as a means of reflecting on how life has changed since Churchill's funeral! Incidentally, about the clapping; I remember feeling it was a very sad thing, as well as being a momentous thing, that Churchill had died, even though he was an extremely good age. And I think everyone would have felt gratitude and respect to him, because of his leadership during the war. Attitudes to MT were and are much more divided; and in general, I would think that while people might respect her, they don't feel that kind of affection. So the applause was kind of acknowledging a good performance, perhaps... whereas when Churchill died, there was much more of the sadness you feel when you lose an aged member of the family - applause would perhaps not have expressed that.

I did enjoy this piece. Watched the funeral myself with my elderly mother who has memory loss. All the way through she was asking why and I was explaining that Mrs T was our first woman prime minister. No, Jul dear, Mum responded every time. We've had one of those already. Now, what was her name ...?

You evaded the key difference. Winston Churchill was acknowledged as a great man by his opponents, Thatcher wasn't.

Hi Nick, I was merely observing the funerals, the differences and similarities. I deliberately made no overt judgements as to the personal or political merits of the deceased.

What is less noticeable, perhaps will be the vital things we won't be able to pay for because of this show - a few operations for people in pain - some teachers salaries, some libraries - and that is also part of history.

Actually, Nick, as a former opponent, I do recognise her as a great person. That's not to say I agrre with everything she did, but I do acknowledge that ther were some issues on which she was right and I was wrong. I don't say that about many people.