A Day Out In History by Susan Price


I visited the Black Country Museum the other day.

It’s an open air museum, dedicated to the industrial history of the Black Country, with many reconstructed buildings, illustrating what life was like in the area from the late 1700s to the 1930s. 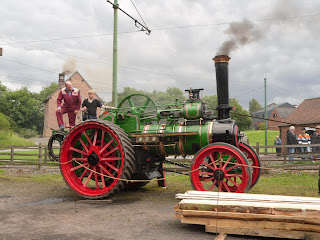 We chanced on a day  when many steam engines were chuntering around the site, and as we stepped from the entrance building, we breathed in coal-smoke, and and ash.  I hadn’t smelled in many a long year, but immediately remembered it - the smell of my childhood, a part of my personal history. (Davy, a Scot and country boy, started coughing immediately, and said that he wouldn’t have lasted ten minutes in Ye Olde Blacke Countrie.  My family lasted, but it’s true that we have generations of bronchitis, severe coughs, sinus trouble and catarrh behind us.) 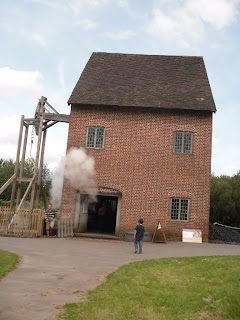 We saw the ‘nodding donkey’ Newcomen engine steaming away.  It’s one of the oldest surviving engines, dating from 1712, and originally built to pump water from Lord Dudley’s mines, only a couple of miles from where it stands now.
From there we visited the mine.  It’s a ‘fake’ mine, but within the constraints of not actually injuring or killing visitors, an effective one.  As you go round, tableau are illuminated, and a recorded voice – supposedly that of an old miner – tells you about the work done by the miners in the 19th century. What the voice tells you is interesting, but the accent and dialect could have been made more consistent and accurate.  There are many Chaucerian, Middle English words in the dialect (such as fowd, gleed and malkin), and Shakespeare probably spoke something like it.  There's more to it than simply pronouncing 'you' as 'yow'!
The low, narrow, dimly lit tunnels give a very real sense of the claustrophobic, awful conditions: and the mock ‘blasts’ and roof-falls are scary.  We emerged into the daylight profoundly grateful, yet again, for having been born in the 20th Century, and not having spent a childhood crouching in total darkness, to open air-doors.
The mine also provides a vivid impression of the dangers of the Black Country’s famous ‘thirty-foot seam’ (9 metre seam) – the only place in the world where you climbed a tall ladder to cut coal.  Undercutting the thirty-foot, and then 'bringing the roof down' was a dangerous undertaking.
Walking around above ground, I pointed out the dark ‘Staffordshire Blue’ bricks that topped most of the walls, and made the pavements and roadways.  I realised that the red and blue brick, the grey smoke and the greenery in the black and grey earth of the gardens made up the colour palette of my childhood – as my brother has so well captured in his cover for my next ebook, ‘The Ghost Wife’, which is set in the Black Country.  I hadn’t realised that until I visited the museum.
We joined a lesson in the school, chanted our times tables, and practiced our handwriting on the slates, and we toured the 1920’s fairground with its helter-skelter and swingboats.  We went into the cinema, which had a sacking curtain for a door, and hard benches inside.  I remember my parents telling me about a similar cinema that they remembered from their childhood.  It had been nicknamed 'The Ranch-house' and they said you had to fight the rats for a seat, and then defend your sweets from them. (But I take this with some salt.)
Davy and I didn't have to fight any rats.  We watched a showing of Chaplin’s ‘Getting Acquainted’.  Davy chuckled, but I have to admit I found it completely incomprehensible.  It seemed to consist of people running around, falling over and hitting each other for no reason at all.  I suspect that some captions were missing.
One caption at the start of the film asked people not to read aloud as it annoyed other patrons - which reminded me of my Dad saying that, in his childhood, cinemas were murmurous with those who could read whispering the captions to those who couldn't.
What Davy really wanted to do was go through the canal tunnels under Dudley’s hill.  So we joined the narrow boat and were taken into the dark, dripping tunnels that have been there since 1792.  It’s not very comforting, when you have a whole hill hanging above you, to think that the boat battered brickwork around you, seeped through with calcite from the limestone, is 220 years old.
It’s a memorable – if wet – experience, as your boat passes the sinister openings of old limestone mines, or floats from darkness into a brilliantly lit, green basin, its sides hung with bushes and flowers, open to the sky and birdsong.  In many places the walls of the tunnel are hung with beautiful calcite ‘curtains’ of crystals in glittering lacy folds.
After the boat-trip, we visited the ‘Bottle and Glass’ Inn, where they will serve you a pint of old ale – but the place was grimly comfortless compared to a modern pub, even in the saloon bar (and no respectable woman would have crossed the threshold).  My foremothers would probably have a very poor opinion of me, if they could see me, frequenting pubs as I do, and drinking single malt.
Opposite the pub, of course, was the Methodist Chapel, which is used for carol services at Christmas.  It had to be a Methodist Chapel, as the Methodists were important to the Black Country.  They had more fire in their bellies than CoE, and were behind a lot of early Unions, Friendly Societies and Workers' Educational Societies. 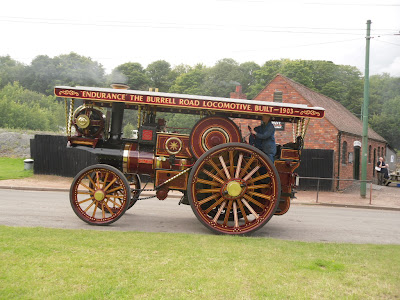 There are several shops, of different dates.  Davy liked the one displaying old motorbikes, and the cake and sweet shop were doing good business.  The grocery shop was being swept out by a woman in Victorian dress.  A visitor called out to her, mockingly, “I’ll have ten pounds wuth of grey pays!”
The shop-keeper replied, tartly, “I doubt yo’ve got ten pounds to yer nairm, madam – look at the sight on yer – wearing a mon’s trousers, and on a Sabbath!  Yo should be ashairmed!  Out on it – goo on!”  The visitor was laughing too much to think of asking why the shop was, disgracefully, open on the Sabbath.  (I used to be told a tale, by my uncle, of a fiercely religious old couple who kept the corner shop of his childhood. Their shop was open on Sunday, but you had to pay them by putting the money on a shovel - so that they didn't touch the filthy stuff on the Lord's Day.)
I was sorry to miss the magnificent shire horses which are sometimes to be found on site (at other times they’re at the Sandwell ValleyFarm) but there were a couple of very happy Gloucester Old Spot pigs grubbing around in a cottage garden; and the stretch of canal down by the old lime kilns has become something of a nature reserve.  Davy, a fisherman, was much impressed by the clarity of the water and the big fish (including a small pike) – and I liked the moorhen and chicks.  This isn't so out of keeping with the old Black Country - it was dirty and smoky, yes, but the countryside was never far away, and my grandmother kept chickens and ducks for the eggs.  Many people kept pigs in their yards too - one aunt had a house-pig, the runt of a litter which became a pet.  In my grandparents' time, in the early 1900s, there were several farms stranded in the middle of the factories and brickyards
All in all, the Museum provides a good day out and if great lumps of imagination are used, it can give you a glimpse of the old Black Country.  The real thing, it needs to be pointed out, was much grimmer, dirtier, noisier and far more cruel.  The men who worked those lime-kilns, for instance, were blinded by the caustic dust: miners were killed reguarly, and medical care was expensive.
One story that's come down to me from my grandfather tells how one of the brothers he shared his bed on the floor with 'went funny'.  My grandfather went and told his father, who came, looked at the boy, and said, 'He's dead.'  He then pulled the body into a corner of the room, told the other children to go back to sleep, and went back to bed himself.  "Well," said my own father, when I was apalled at this, "he had to go work himself in the morning - he was a miner.  There was nothing he could do, was there? - the kid was dead."  Doctors cost half-a-crown (15p) for a vist.  That was more than they could afford. 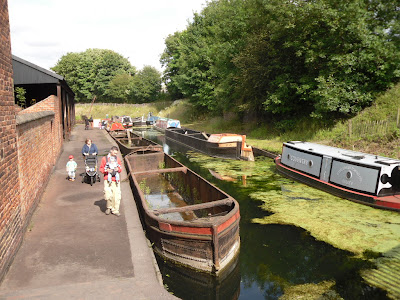 Thanks for this - I didn't know anything about the Black Country Museum, and it sounds just the sort of place I like.

Fabulous post. I love the filthy lucre being put on the shovel on the sabbath. But fighting with the rats for sweeties? I'd hand them over and run.

Ohk that was a fun blog to read, thank you, Susan! I felt as if I'd done the visit myself, and in your good company.

Even a fake mine sounds terrifying - what an amazing museum! Thanks for posting about it.

Fascinating - if I ever get the chance I'll give it a go, though not sure I'd survive the tunnel! Thanks for sharing.

I didn't know about this either and will definitely schedule a visit now. Fantastic description of the cinema and people reading captions out for friends who could not read. Thanks Susan

Think this post would get a coachload of History Girls (or anyone interested in history and people) to the Black Country Museum!
Thanks.

The story of the dead brother in the bed is what got to me. Amazing stuff, Susan. And love the cover art by your brother!

Thank you, I really enjoyed this post. I think I shall have to make a visit to the Black Country Museum soon!
PS The Big Pit National Coal Musseum in Blaenavon, South Wales is good too. You go 300 feet down a real mine and get a tour with a real miner. I've just looked it up and it's been open for 30 years from April 30th 1983: yesterday, as I write this!

PPS I can spell Museum!

I think I've been into those canal tunnels! I used to dance with the Ironmen & Severn Gilders, and one of the "Ironmen" lived on a boat so took us all inside. Great pictures.

Thanks for this magnificent post. The Black Country Museum was one of the significant ports of call on my all-too-brief holiday last year. This brought it to life again, but more vividly with the extra colour of local knowledge.