History is pointless - by Eve Edwards

Building on my last blog post in March - history is annoying - I have decided to tackle the even more contentious issue of history being pointless.

'What?!'  I hear you cry.  'Run this woman out of the History Girls for heresy.'

*Sounds of gathered History Girls organising a posse to chase me out of town* (I would respectfully suggest you pin the sheriff star on Caroline Lawrence as she knows all there is to know about cowboys...)

But hold your horses, my friends, this is not a Michael Gove type argument to strike the subject from the school curriculum.  It's really a cheeky way of getting you to read a more serious argument about the mistreatment of history as a means of point scoring, the claim 'we won' or 'it was your fault'.

I was thinking about this theme in connection with some research I am doing into the Battle of Jutland for something I am writing on World War 1.  I was particularly drawn to this encounter because my great-grandfather fought in it as a Chief Petty Officer - Gunner on board HMS Monarch.  That made each shell burst so much closer as had he been standing in the wrong place, I would not be here.  I had only vague impressions of this battle before I began reading up on it.  I knew it was the major sea encounter of the war and that British sea supremacy was confirmed in that the German fleet did not make another serious attempt to get out of its home waters afterwards.  I was therefore surprised to discover that the German High Command claimed it as a victory.  And here we come to the point scoring.  On a strict tally of lives and ships lost, the Germans did indeed 'win'.  If you choose to score it on another scale - that of who left the encounter with the most ships, heavier fire power, freedom of movement - then the British navy carried the day.  As one commentator put it: it was like the German navy was a prisoner who escaped his cell, roughed up his guard, but then returned to sit behind a locked door.

So both sides won - or lost - depending on your perspective.

It reminded me of how unreliable history becomes when turned into a point scoring exercise.  (Let's not even start on the 'who was to blame for WW 1?' discussion).  Looking round the world there are so many present day conflicts where a historical tally of grievances is used as justification for current atrocities.  Clearly it would be reprehensible to forget, or sweep under the carpet, injustices committed, especially when those affected are still alive, yet there are many cases where the wrongs seem to a third party about equal and still the two sides are only interested in their own points.  Would it not be better to use history to understand, rather than score? 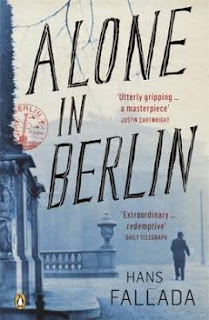 Moving away from the academic discipline of history to fiction writing, I suppose that is what a good historical novel does: it equips you to understand the perspective of someone on the other side.  I really valued reading last year, Alone In Berlin by Hans Fallada, which is based on the true story of an ordinary man trying to stand up to the Nazi regime.  Written in the years immediately after the war, this book helped me see a possible answer one of those great historical questions: how on earth did a civilised nation like Germany let Hitler do what he did?  I can now imagine just what it was like to be a civilian in Berlin and can grasp why the population as a whole 'allowed' the holocaust to happen and how difficult it was to resist.  I highly recommend this book if you haven't yet read it.

So to recast my title in a more honest fashion now I've got you to read to the end: history should not be about point scoring; the best use for it is understanding.

When I read Alone in Berlin I felt like there was a bit of the puzzle falling into place that had been missing - the how. Equally, watching the recent series Chivalry and Betrayal on BBC4 has opened up the French side in a way I hadn't contemplated before.

Of course, the further we get from events the more benevolent we feel about the causes of them and who actually 'won'. The Hundred Years War is far less potent to the British imagination than the Blitz or the Falklands. A few generations distant can start looking at the why/how, for others it's too close to contemplate.

Did you know Alexander the Great even employed an official historian to accompany him on his epic journey and make him into a hero? The Battle of the Granicus, where the Persians first tried to stop his army, was recorded as a brilliant victory but actually it seems the young Alexander made a major mess of it and was lucky to escape with his life...