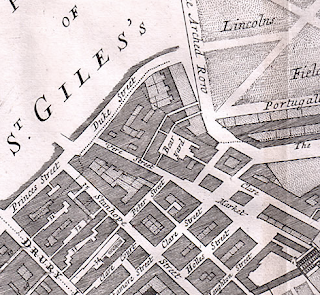 This weekend, the new Archbishop of Canterbury invoked the Easter spirit of tolerance and forgiveness into the debate over gay marriage and female bishops. As a state (if not a nation), we are still struggling to come to terms with the idea that gay people exist throughout society and may wish to avail themselves of the same legal rights and social status as their straight counterparts. I spend much of my working life researching and writing about the people on the margins of society in eighteenth century London, and in that work come across many ordinary gay men and women, trying to make their own way regardless of the strictures of their society. Gay men are usually more visible as their relationships were deemed criminal at the time and so it is court cases that illuminate their world. Two of the most famous are Mother Margaret Clapp's Molly House (details of which can be found in the Old Bailey Online records) and The White Swan in Vere Street. Margaret Clapp's was more of a coffee-house primarily for homosexual clientele, rather than a place where gay sex was traded for money and The White Swan was one of the first and most accurately recorded establishments had been set up with the aim of making money. It stood in a medieval street just to the west of Lincoln's Inn and was part of the area of London obliterated by Kingsway.

On the 8th of July, 1810 the Bow Street Police raided The White Swan, a tumbledown pub of Tudor origin near Drury Lane. Twenty-seven men were arrested on suspicion of sodomy and attempted sodomy. The Swan had been going for less than six months, established by two men, Cook and Yardley, but already had a considerable following. Cook, whose wife ran an ordinary pub nearby called the White Horse, was proud of his amenities, and his clientele. 'Cook states that a person in a respectable house in the city, frequently came to his pub, and stayed several days and nights together; during which time he generally amused himself with eight, ten, and sometimes a dozen different boys and men!'

Cook and Yardley had furnished their establishment for its purpose. 'Four beds were provided in one room - another was fitted up for the ladies' dressing-room, with a toilette, and every appendage of rouge, &c. &c....The upper part of the house was appropriated to youths who were constantly in waiting for casual customers; who practised all the allurements that are found in a brothel, by the more natural description of prostitutes. Men of rank, and respectable situations in life, might be seen wallowing either in or on beds with wretches of the lowest description'.

The account of The White Swan raid and the subsequent trials was told in 1813 by Robert Holloway, later Cook's lawyer, who sold many copies of his account. In it there are some excellent observations of the behaviour within the house, where faux marriages were conducted to 'bless' the coming union. The descriptions of these weddings make them appear parodies of the traditional service, but they were common enough that on some level they must have had meaning for those performing in them.

Many of the clientele assumed feigned names, though often not very appropriate to their calling in life. 'Kitty Cambric is a Coal Merchant; Miss Selina a Runner at a Police Office; Blackeyed Leonora, a Drummer; Pretty Harriet, a Butcher; Lady Godiva, a Waiter; the Duchess of Gloucester, a gentleman's servant; Duchess of Devonshire, a Blacksmith; and Miss Sweet Lips, a Country Grocer. It is a generally received opinion, and a very natural one, that the prevalency of this passion has for its object effeminate delicate beings only: but this seems to be, by Cook's account, a mistaken notion; and the reverse is so palpable in many instances, that Fanny Murry, Lucy Cooper, and Kitty Fisher, are now personified by an athletic bargeman, an Herculean Coal-heaver, and a deaf Tyre-Smith.'

It is Blackeyed Leonora, the drummer who stands out amongst this motley crowd, for Leonora was in fact most likely Thomas White, a 16 year old drummer in the Guards. Thomas was one of the 'youths' who stood and waited in the upper part of the house. He was a great favourite amongst the 'more exalted' visitors to the house, according to Holloway. Almost every single one of the people at The White Swan had an mainstream occupation. Of course, some were visitors, but White worked there. No doubt it was his youth, and probably his looks that drew attention from the richer customers. 'White, being an universal favourite, was very deep in the secrets of the fashionable part of the coterie.'

Poor Thomas, who wasn't even at The Swan on the night of the raid, was too quick to confess, and was executed for his 'crime' after almost a year in prison, although there was no doubt he was guilty of the charge. With him died a man called John Hepburn, aged 46, who had procured White's services with the help of a witness who testified against him. White was prosecuted as the giver, rather than the receiver which made it almost impossible for the court to avoid the death sentence when the jury convicted him of 'buggery'. At White's execution, various people of note were recorded. 'A vast concourse of people attended to witness the awful scene. The Duke of Cumberland, Lord Sefton, Lord Yarmouth, and several other noblemen were in the press-yard.' The Duke of Cumberland had avoided a homosexual scandal by a razor thin margin in June 1810 when his servant was found with a cut throat after threatening to out his master after catching the Duke and his valet 'in an improper and unnatural situation'. Perhaps Cumberland was one of White's 'fashionable' guests.

Of the other 25 or so, only six were found guilty and they were pilloried and imprisoned, including Cook the landlord. Yardley seems to have got away with the whole thing. The White Swan affair raised the public ire, and the convicted men suffered at the hands of a mob. 'The disgust felt by all ranks in Society at the detestable conduct of these wretches occasioned many thousands to become spectators of their punishment. At an early hour the Old Bailey was completely blockaded, and the increase of the mob about 12 o'clock, put a stop to the business of the sessions. The shops from Ludgate Hill to the Haymarket were shut up, and the streets lined with people, waiting to see the offenders pass....A number of fishwomen attended with stinking flounders and entrails of other fish which had been in preparation for several days.'

Cook refused to implicate any more clients, but on his release he began to blackmail two members of the clergy who had escaped prosecution during the raid and investigation. In what was probably a set-up, he ended up in prison for assault and debt and his whole family were systematically ruined in a series of evictions and persecutions that Holloway attributed to 'influential persons'. Just how influential, we will never know.

Wow, what a fascinating story! I'd heard of Mother Clapp's Molly House, but never of the White Swan.

Interesting to note how class-based some of the disgust in the contemporary reports seems to be: the conjunction of "men of rank" and "wretches of the lowest description" and Dukes getting it on with their servants...

How dreadful to think of men being executed for being gay, and to think that this is still the case in some countries. But when we were at the Civil partnership of two dear gay friends, there was a real sense of celebration that the love now did dare speak its name. This excellent blog piece points up why...