How it all began...by Adèle Geras

When I was seven years old, in 1951, this is what I was reading. There wasn't much of anything else around at the time. I didn't come to Enid Blyton properly till I was about eight, in North Borneo. While I lived in Nigeria, from 1950 - 1952 or early 1953, I mostly read OUR ISLAND STORY (and I've written about this experience on this blog in the past. Here is the link: http://the-history-girls.blogspot.co.uk/2011/08/blog-post.html and a book called TALES OF TROY by Andrew Lang. It's not the kind of thing you'd think of giving a seven-year-old to read nowadays but I adored it and could recite long passages from the book off by heart. I read it all the time, eagerly, avidly, and I fell in love from that moment with the story of the Trojan War. 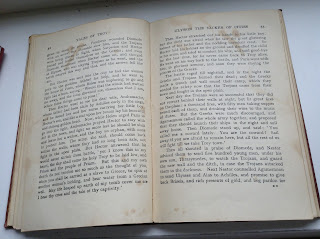 On every single recto page are the words: ULYSSES, SACKER OF CITIES, almost as though this were a kind of subtitle to the legend on the verso pages: TALES OF TROY. This obviously planted something in my mind because I've always taken the side of the Trojans in the war that lasted so many years and that ended with the most famous city destruction of them all, though there have been a few contenders more recently for this dubious honour. 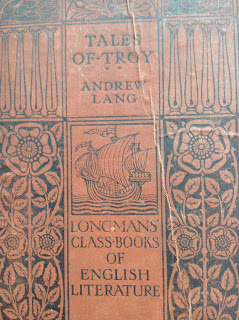 One of the chief attractions of this book is the illustrations. I'm putting up two examples. This one because I used to love declaiming the words that accompany the drawing of the mortally-wounded Paris, throwing himself on Oenone's mercy. I'm going to quote the words I loved so much, just because I still love them. "Lady, despise me not and hate me not, for my pain is more than I can bear. Truly it was by no will of mine that I left you lonely here, for the Fates that no man may escape led me to Helen. Would that I had died in your arms before I saw her face! But now I beseech you in the name of the Gods, and for the memory of our love, that you will have pity on me and heal my hurt and not refuse your grace and let me die here at your feet."
Oenone's expression conveys perfectly what she's feeling: a mixture of still-burning love, pity for a wounded man and a good bit of "I'm not going to be tricked into listening to your blandishments, you bastard!" 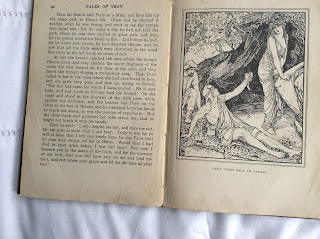 The picture of Helen on the walls of Troy, pointing something out to Priam, was my favourite drawing of all. I think it's the dress. I just longed to own one precisely like that and it's still my benchmark for all 'classical' garments. 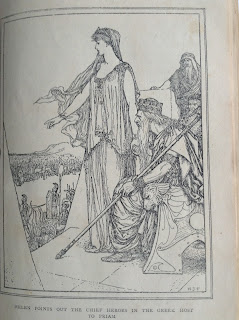 So this is where my interest in all things classical began. I went on to read Virgil's Aenied Book 2 and then Book 4 while at school. I didn't study Ancient Greek but read translations of the Iliad and the Odyssey. I read, as student of French, LA GUERRE DE TROIE N'AURA PAS LIEU by Jean Anouilh. And in the fullness of time I wrote my own novel, TROY, which is the story of five normal teenagers who just happened to have grown up during the time that their city was besieged by Ulysses. And we know who he was, do we not? The Sacker of Cities. It's a story that's endured for thousands of years and every time someone retells it, it lives again. I am proud to have taken my place in a long line of writers who've been inspired by this tale. 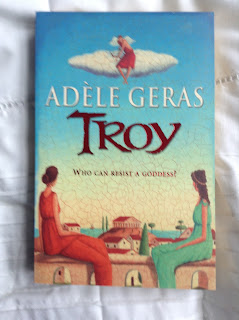 P.S. TROY is out of print, but probably findable in a library near you.
Posted by adele at 07:30

I remember those pictures! Not the book, or ever having read it, but I'm sure I poured over those images! Thanks for reminding!

Gorgeous post Adèle. I too lingered over similar illustrations in the books of my childhood. But I can't believe that your magnificent TROY is OP!I still have my original copy and it's the most magnificent retelling. A perfectly pitched meld of young adult hopes and dreams + gods and legends, spiced with poignant moments.

Thanks, Theresa! I live in hopes of a reissue one of these days...and glad to hear someone else remembers this ace book.

Fascinating post, Adele, Thank you and I can see exactly why you fell in love with those illustrations. They gorgeous.

My childhood reading pleasures were The Tanglewood Tales and Roger Lancelyn Green's Tales of the Greek Heroes and more especially The Tale of Troy. Oh I wish I still had my old Puffin editions. I wonder what happened to them? I still have a lot of my old books.

I do believe that childhood reading has an enormous influence on us, especially if we end up writing ourselves.

It's hard to believe now, but in those days illustrations in children's books were nearly the only pictures I saw that hadn't come free with cigarette coupons.
What a shame those intricate ink drawings have stopped being used. Their ornateness was fascinating even for someone who really wanted to look like Twiggy.

Lovely post, Adele. There is something about the black-and-white illustrations. Is it like the radio ... leaving something to be understood or imagined, so the imagination has to meet the writer halfway?

Why not put TROY up as an ebook, Adele? I say this five minutes after FINALLY put my first ebook up, and just waiting to see if it has worked. But if it has, I can tell you that it was surprisingly easy to do. That book SHOULD be available!!!!

I always used to want to colour in those kinds of drawings: but I was very rarely allowed to...

Yes Adele, if you have the digital rights you should definitely get TROY republished as an ebook! I loved that book and still have my paperback copy, but I'm sure there must be plenty more readers out there who would enjoy it.

Simply lovely. evocative post sharing with us the story, the story of the young reader and the story of the book itself with those wonderful illustrations. I like your commenter's comparison with the radio. Will look for your novel. W.

Thanks for all the comments...and yes, digital is a distinct possibility.

Since you have much interest in Troy, you then might like this cute little video about Troy...