The Fall of the Red Cross Knights - Katherine Langrish 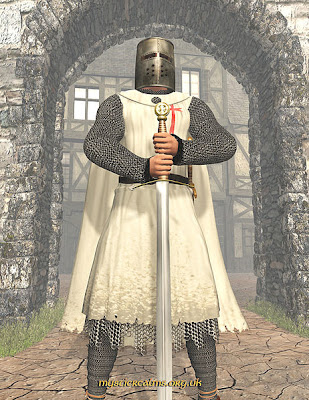 Everyone’s mental picture of a Medieval Knight must owe something to the Knights Templar.  Here’s a picture of one.  With his distinctive white mantle and red cross, he seems the epitome of the gallant Red Cross Knight himself, or many another knight who lumbers into the joust in films of Ivanhoe or Robin Hood.

When I was a child I read and greatly enjoyed the historical novels of Ronald Welch, whose books followed the fortunes of the Careys, an imaginary branch of the D’Aubigny family, whom he placed in Llanstephan Castle on the Welsh Borders, and whose sons (always brilliant swordsmen or crack shots) manage to be present at nearly every moment of interest in English history, from the Crusades to the First World War.  The first of the series, Knight Crusader (Oxford, 1979) won the Carnegie Medal: it is a well researched, exciting, and remarkably well-balanced story about Philip, a young knight born in Outremer (as the crusaders called their heavily defended eastern kingdom). He fights in the Battle of Hattin against Saladin, is taken prisoner by a Turkish knight, Usamah, who treats him well, and eventually escapes to fight for Richard Lionheart, and to make his way to England for the very first time.

One of the things that struck me about the book, reading it for the first time, was the contrast Welch draws between the Muslim-influenced luxury and cleanliness of the Outremer castles, opposed to the squalor of a smoky, draughty Borders castle of the same date.  Annoyingly, I seem to have mislaid my copy, but I recall Philip wondering why a recently-arrived comrade is so smelly (because he baths only once a year) – and so uncouth.

I now suspect Ronald Welch may have been indebted to a book I’ve discovered entitled ‘Memoirs of an Arab-Syrian Gentleman’, originally written by one Usamah ibn-Munqidh, who died November 16, 1188 (or the 23rd of Ramadan, 584) at the grand age of  96. Usamah’s reminiscences include fascinating stories of the clashes, not only military but cultural, between the invading and occupying Frankish forces and the Islamic armies.

Usamah regards the Franks with bemused wonder as ‘animals possessing the virtues of courage and fighting, but nothing else.’ Here are some of his accounts. Circa 1140, Usamah befriended an elderly Frankish knight who had come to the Holy Land on pilgrimage.  When it was time for him to return home, he asked Usamah to send his son with him to Europe.  It was the Western custom for noble boys to leave home and become squires, but a custom unfamiliar and unwelcome to Usamah, who needed a get-out:

When he resolved to return by sea to his homeland, he said to me, "My brother, I am leaving for my country and I want thee to send with me thy son” (my son, who was then fourteen years old, was at that time in my company) “to our country, where he can see the knights and learn wisdom and chivalry.  When he returns, he will be like a wise man.”

Thus there fell upon my ears words which would never come out of the head of a sensible man; for even if my son were to be taken captive, his captivity could not bring him a worse misfortune than carrying him into the lands of the Franks.  However, I said to the man:

“By thy life, this has been exactly my idea.  But the only thing that prevented me from carrying it was the fact that his grandmother, my mother, is so fond of him, and … did not let him come out with me until she exacted an oath from me to the effect that I would return him to her.”

Usamah provides examples of  the Franks' curious medication, both bad and good in effect: a knight with an abscess in his leg was being successfully treated with a poultice, until a Frankish physician arrived and asked the knight:  “Which wouldst thou prefer, living with one leg or dying with two?”  and proceeded to cut off the leg with an axe: gruesomely, “the marrow of the leg flowed out and the patient died on the spot.”  A happier outcome was that for a knight called Bernard, who…

was one of the most accursed and wicked among the Franks.  A horse kicked him on the leg, which was subsequently infected and which opened in fourteen different place.  Every time one of these cuts would close in one place, another would open in another place. All this happened while I was praying for his perdition.  Then came to him a Frankish physician and removed from the leg all the ointments which were on it, and began to wash it with very strong vinegar.  By this treatment all the cuts were healed and the man became well again.  He was up again like the devil.

The Knights Templar were so called because their headquarters were on Temple Mount in Jerusalem, in a wing of the royal palace close to the Al Aqsa Mosque. They became second and third generation expats, who as expats often do, adopted a number of foreign ways and, paradoxically, acquired some respect and tolerance for the Islamic culture which surrounded them, even though they were officially its enemies. Usamah has an interesting story to relate of different attitudes to prayer:

Everyone who is a fresh emigrant from the Frankish lands is ruder in character than those who have become acclimatized and have held long association with the Moslems.  Here is an illustration of their rude character.

Whenever I visited Jerusalem I always entered the Aqsa Mosque, beside which stood a small mosque which the Franks had converted into a church.  When I used to enter the Aqsa Mosque, which was occupied by the Templars, who were my friends, the Templars would evacuate the little adjoining mosque so that I might pray in it.  One day I entered this mosque, repeated the first formula “Allah is great,” and stood up in the act of praying, upon which one of the Franks rushed on me, got hold of me and turned my face eastward saying, “This is the way thou shouldst pray!” A group of Templars hastened to him, seized him, and repelled him from me.  I resumed my prayer. The same man, while the others were busy, rushed once more upon me and turned my face eastward, saying, “This is the way thou shouldst pray!”  The Templars again came in to him and expelled him.  They apologised to me, saying, “This is a stranger who has only recently arrived from the land of the Franks, and he has never before seen anyone praying except eastward.”  Thereupon I said to myself, “I have had enough prayer.”  So I went out and have ever been surprised at the conduct of this devil of a man, at the change in the colour of his face, his trembling, and his sentiment at the sight of one praying towards the qiblah [the direction of Mecca].

The Templars’ full name was The Poor Knights of Christ and the Temple of Solomon. Originally they relied upon donations to survive, but on acquiring St Bernard of Clairvaux as a sponsor (and paying no taxes) they rapidly became rich, with financial networks stretching across Christendom. There’s an irresistable comment in the wikipedia entry on them, suggesting they represent the world’s first multinational corporation.  And we know how popular large multinationals are.

That wealth and power, coupled with the xenophobic suspicion ‘back home’ that the Templars had become the degenerate and luxurious sympathisers of a foreign creed, led to their downfall. In 1307, Philip of France ordered the arrest of the Grand Master of the Templars, Jacques de Molay, along with many of his order.  The warrant opens with the words, “God is not pleased.  We have enemies of the Faith in the Kingdom.”  Charged with multiple offences from idolatry, homosexuality and obscene rituals, to fraud and financial corruption, the Templars were accused, tortured, convicted, and eventually many of them burned.  The order was broken up.  One of the saddest ‘confessions’ is this:

‘I, Raymond de la Fère, 21 years old, admit that I have spat three times on the Cross, but with my mouth and not from my heart.’ 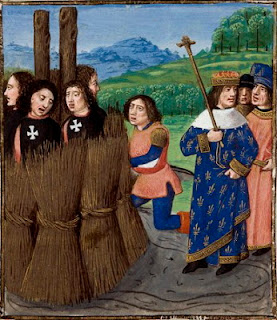 One wonders what young Raymond made of a world in which he could be tortured into making such a statement (is the ambiguity deliberate? - is he implying that not the act, but the admission of the act comes from his mouth, not from his heart?) when he came from a world in which Christian Templar Knights could rush to protect the sanctity of a Moslem gentleman at prayer.

I remember reading somewhere that the Templars were very anti-washing, thinking it was connected with the Devil! Possibly those who wee in the Holy Land long enough relaxed that attitude. ;-)

You know, one thing that always irked me about them is that when Jews lent money - the ONLY thing they were allowed to do, more or less - it was called usury. When the Templars did it, it was called banking. But that was a nasty way for them to end!

Would love to read this book - what a fascinating glimpse into a far-distant world!

The Templars did not lend for interest (just as 'Islamic' finance procucts don't now). They earned income in other ways. (Bank charges and such like).

The 'red cross' was a Crusader symbol, not a Templar one - there are differences. And most Templars were sergeants rather than knights, and so wore black/russet cloaks.