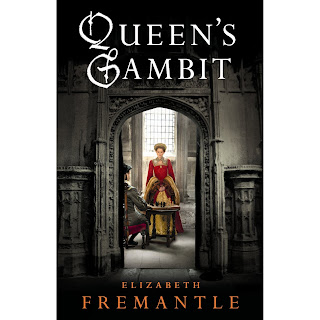 There are zillions of books about the first Katherine and her successor, Ann, and pale Jane flits through a number - but I can't think of many where the last Katherine features. And where she does appear, she is usually in the background: the woman whose husband flirted - and possibly did more - with the young Princess Elizabeth. So she seems a passive, shadowy character, chosen by the king to be the wife of his declining years, someone to whom things happen - not much of a heroine, then.

But Elizabeth Fremantle reclaims her. In this book, Katherine becomes a real character, and what a delightful one she turns out to be! She is intelligent, lively, beautiful, kind, loyal, brave - why wouldn't Henry want her for his wife, after poor, silly Catherine Howard? (Now, who will write the book to reclaim her? How could anyone be so silly as to think she could get away with cheating on Henry?)

When we first meet her, Katherine's husband, John Latymer, is on his deathbed and in terrible pain. Katherine - Kit - at thirty one much younger than her husband, is skilled at healing and John begs her to give him enough of the draft she has prepared to ease his pain to finish it. She is fearful; such a thing would be against the command of God and would imperil both their souls; but she loves him and so she does as he asks.

Soon after his death, she and Latymer's daughter, Meg, are summoned to court by the Princess Mary. Neither wants to go. Meg is fearful and painfully self-conscious; she has never recovered from an ordeal both of them went through several years earlier when they were held captive by rebels. She clings to Katherine, and to their servant, Dot, through whose eyes the story is partly told. Katherine, though, finds that the court has unexpected consolations - particularly in the very attractive shape of Thomas Seymour. Sensible Kit finds that she has fallen hopelessly in love. Unfortunately, however, the King's eye has fallen on her - and she knows as well as anyone that if he wants her, he will have her.

Normally in any litany of Henry's wives, Katherine's reign is seen as uneventful and calm, especially compared to those of his previous queens. But Fremantle suggests that this was not the case. Due to her unwavering support of the reformed religion - and to her continuing passion for Thomas Seymour - Katherine is in fact fortunate that Henry dies when he does.. The author portrays very clearly the treacherous politics of the court - and the terrifying unpredictability of Henry's moods. For all her gifts of diplomacy and persuasion, Katherine will find outliving Henry an almost impossible challenge.

Fremantle writes really beautifully, crafting a complex and subtle portrait of a woman who, despite her many qualities, needs every bit of skill she has to ensure that she will survive. There are other interesting characters too: Henry, of course, but also Huicke, the skilled but vulnerable court physician, and Dot, the loyal servant.

I have just one problem with this book, and it's one that puzzles me. It's written in the present tense, and for some reason I found this intrusive. I'm not sure why this should be. After all, everything that a novelist does is a construct designed to convince the reader that this created world is real. There's no particular reason I can think of why the present tense shouldn't be used to this end, but there it is, for me it jars. But Hilary Mantel used it in Wolf Hall, and nobody seemed to mind it there - so clearly, it's just me!

This is a rich and satisfying read - I strongly recommend it. It's published by Penguin, at £14.99.
Posted by Sue Purkiss at 02:00

No, I don't think it is you. I find it very difficult to read anything written in the present tense and there seems to be something very "wrong" when history is written that way. I gave up on Wolf Hall and now I hesitate to try this - although I probably will.

Oh, Cat, I hope I haven't put you off. There's masses to enjoy in this book. I didn't mention all the detail about life at that time - you really get a sense of what things looked like, smelt like, felt like. And Katherine herself is a tremendous character.

These days you have to get used to the present tense or you'd run out of things to read...if you see what I mean. It's so ubiquitous. I love the Mantel and still maintain that it's not what you do it's the way that you do it, but still, whenever a 3rd person past tense book appears I fall on it with great glee!

I loved everything about Wolf Hall, and the present tense just seemed right for it, didn't jar at all - but in general, I think of third person past tense as the 'invisible' perspective, the one that my reading brain has become so accustomed to that I am right there, in the story, with no 'textual level' distractions. For me that's the ultimate aim of writing, is not to draw attention to itself at the expense of the story. But since most 'literary fiction' does just that, I guess there are a lot of people who don't agree...

I have no problem at all with the present tense and am enjoying Queen's Gambit - though it doesn't have the luminous quality of Mantel's work, but hey! If one had to be as great a writer as Hilary M to write, we might as well all give up. However, I was a bit disturbed to see that Fremantle describes the smell of a tannery as 'comforting.' Tanning is a stinky trade! And did any English plebeian houses ever have stoops? Isn't that a kind of veranda?
I am glad to see Katherine Parr written about. Actually, though, she does have a significant part in Margaret Irwin's Young Bess, and she is shown to be very human there..