Now You See It, Now You Don't, by Laurie Graham 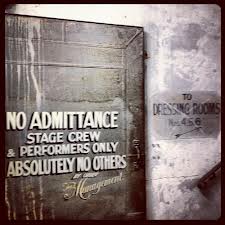 A theatrical theme seems appropriate for this post. My London debut as a dramatist opens on April 23rd at the Baron’s Court Theatre. The Dress Circle, adapted as a one-woman show and starring Sian Hawthorn, is being performed in support of Leukaemia UK. To celebrate I bring you a few theatrical oddities.

I’ve always had a thing for theatres and in particular for backstage, where illusions are created. I love wig rooms and fly towers and the grotty stairs and corridors that link different parts of the theatre in a most disorienting way. Did you know, for instance, that London's Albery and Wyndham’s Theatres have just one shared stage door? It leads directly into the Albery Theatre so cast members for Wyndham’s have to cross St Martin’s Court by a covered footbridge. I’m told too that access from the Garrick stage door into the actual theatre is via an underground passage, though I’ve never seen it for myself.

The nuts and bolts of theatre fascinate me, especially under the stage. This is where the trap room is located, or Hell, as those in the business call it. Sometimes a play calls for figures to appear or disappear, as if by magic. Traps, or openings in the stage floor or wall are the way it’s done, and the trap room houses the machinery that makes it possible. The trap room also tends to get used as a dumping ground for junk, and as a crossover when actors need to get from one set of wings to another without being seen. In some theatres they’re liable to get their feet damp. In the Strand Theatre the trap room is at water table level, and at the Victoria Palace, when it was necessary to enlarge and deepen the trap room to accommodate the lifting machinery for Billy Elliott, there was an unforeseen hold-up. The required excavations were likely to encroach on the royal sewers so permission had to be obtained from Buckingham Palace. It was granted.

Meanwhile, back in the trap room… The simplest kind of traps are the Grave Trap and the Cauldron Trap. A section of the floor slides to one side to allow an actor or a piece of equipment like the witches’ cauldron in Macbeth to slowly descend or ascend by hydraulic lift. For something faster and more dramatic a Star Trap is the thing. 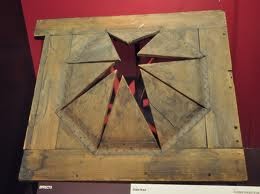 A small moveable platform is positioned directly beneath the trap, lowered slightly, and then the brake applied. The actor stands on the platform, the brake is released, he goes shooting up through the triangular sprung flaps and leaps smartly clear of the trap before it closes. The star trap isn’t for slowcoaches and even for the nimble they can be dangerous. The great Joseph Grimaldi was once making an entrance through a trap when the counterweight rope snapped and he fell back into the trap room badly bruised. But the show went on.

The Vampire Trap works on sprung flaps too, but usually behind a scenery flat rather than beneath the stage floor. When it works well it can give the illusion of a figure appearing or disappearing through a wall. A bit of theatrical fog helps. But my favourite of all is the Corsican Trap, also known as a ghost glide. It was created in the 1850s for a stage adaptation of Alexandre Dumas’ novella The Corsican Brothers and is the means of making a figure appear to rise and float across a stage.

The mechanism (and you can see here a great demonstration of a Corsican trap at work, courtesy of the Gaiety Theatre, Douglas, Isle of Man)  is as follows. The actor stands in the trap room on a small platform and is then hauled up a rising track while a section of the stage slides out of the way rather like a rolltop desk. The sliding section is called a scruto. A delicious word but try getting away with it in a game of Scrabble. Sometimes the scruto is overlaid with bristles that fall back in place after the ghost has floated past and give the illusion that there is no hole in the floor, nor ever was.

All very quaint in these days of computer-generated effects, but there lies half the charm of live theatre.

There will be no floating ghosts in my adaptation of The Dress Circle, but I’ll be lurking backstage throughout the week-long run. If you’re a follower of the History Girls, do drop by and say hello.
Posted by Laurie at 01:00

Fascinating stuff - and break a leg on the 23rd! (If that's what you say to the author. Congratulations, anyway.)

Congratulations, Laurie, and I hope it goes brilliantly! I love the backstage world too - this is a fascinating post.

Lovely post, taps straight into my obsession with the theatre, and in particular Victorian and Edwardian theatre. As I'm actually in a play in a lovely miniature Victorian theatre at the moment, it made me feel warm and comfortable.

Very interesting post, Laurie. Perhaps you could incorporate a stage trap into the next Panto. Break a leg on the 23rd!

Candida, commonly known as Yeast is a type of Fungi, normally found in human body in small proportions. But the over growth

of these yeasts will cause infection called as Candidacies. This infection normally affects the areas such as Skin, Throat,

Blood, Mouth, and Genitals. To cure from this type of infection try Yeast Infection No More