‘As oft as nede shall require it must be weeded, for else the wede woll overgrowe the hearbs.’ (Fitzherbert, 1532)

This slovenly gardener (I mean me) has been taken by surprise. Lulled into a false sense of security by the lateness of spring, then just two days of sunshine, and suddenly the bare land is alarmingly green and bristling with a mass of creeping buttercup, ground elder, coltsfoot and bursts of dock and dandelion.

So I’m thinking about historical weeds. Our idea of what a weed is has changed, of course, over time. Many plants we now consider pests have been thought of in the medieval period (and earlier) as food or medicine. But some plants have always been more cosmopolitan, persistent and hungry than others, and they know no boundaries.

In his celebrated book Weeds (2010) Richard Mabey describes how the first Neolithic settlers in Britain brought seeds of corn poppy, charlock and wild radish inadvertently with their wheat and barley grains in 3500 BCE. Groundsel came with the Bronze Age. The Romans brought ground elder to feed their livestock. Rosebay willowherb started its journey here as a rare garden specimen in the 16th century that slowly, joyously escaped and by the 19th century was rampaging along the railway system, like Oxford ragwort. Nettles too have always followed the human trail, thriving in soil rich with our waste and decomposition and ash – on midden heaps and churchyards, and fields improved with manure from pond silt and grazing livestock. Weeds, like crop-methods, are evolving all the time – and keeping up.

How were they dealt with? In the larger Tudor gardens, weeders were most often poor women working for a few pennies a day. Historian C. Paul Christianson has studied 16th century accounts of the Bridge House garden in London, and in The Riverside Gardens of Thomas More’s London, looks at records of the large numbers of female staff working there and at York Place and Hampton Court. He says that, ‘it was chiefly women, often at first noted in the accounts simply as “a weding woman” or “a pore widow to wede the gardeyn” who were employed,’ often for a pitiful per diem of 2d - 4d. Garden weeds were picked as now by hand, sometimes wearing three-fingered weeding gloves (presumably for protection against bramble, thistle and the rasping, prickly langue-de-boeuf). In the fields though, before hoeing became more widespread in England, cropweeds were tackled thus:

‘Ye have a wedyne-hoke with a socket, set upon a little staffe a yard longe, and this hoke would be ground sharpe, both behind and before. In his other hand he hath a forked styke a yarde longe, and with the fork putteth the weed from him, and he putteth the hoke beyond the roote of the wede, putteth it to him and cutteth the weed fast by the earth.’ (Fitzherbert).

The fields must have been continually dotted with labourers weeding along the rows, throughout the season. No spraying of herbicides to rely on then – yet according to the 20th edition of The Agricultural Notebook, modern weeds are as troublesome as they ever were.

Cleavers (or goosegrass, or sticky willy, depending on where you're from) can cause a staggering 40 percent loss to a broad-leaved crop, and annual grass weeds such as blackgrass or wild oats in cereal crops as much as a quarter. Other major agricultural weeds in the UK currently include chickweed, Japanese knotweed, thistles and speedwell, and it’s fascinating to compare these species with the main weeds of Fitzherbert’s or Thomas Tusser’s medieval farmland. They would have grappled with our own familiar adversaries like dock, mayweed, cleavers and thistle. Still a major cropweed now, The Niewe Herball (1578) says of poor or wild oats for example that it is, ‘a hurtfull plant to the Rie as other corne.’

But Fitzherbert and Tusser class as pests some that we’d now consider wildflowers; such as knapweed, cornflower, corncockle and pink mallow. Dorothy Hartley mentions in 1979 how it is no longer the vetches ‘that pull downward’, but bindweed.

It’s an age-old battle. Literally; many annual weed seeds can stay viable in undisturbed soil for startling tracts of time, waiting till conditions are right before germination. Geoffrey Grigson in The Englishman’s Flora (1958) has a great phrase; ‘plough up the old grass, and up comes the charlock, like a vegetable rat.’ Weeds are wily, tough as old boots, and can be very, very patient. Archaeological sites unearthing soil previously covered to some depth have suddenly bloomed with ancient varieties of plant that have lain dormant for as much as 2000 years – truly the living past.

The presence of weeds is confusing, too – because as well as being the enemy of the farmer and the tidy mind, they have individual virtues of their own. Whether or not they’re welcome is all about context. 16th-century Henry Lyte, who translated The Niewe Herball, was as much a gardener and husbandman with an estate to run, as he was a herbalist. So he would have understood the repetitive tedium of hand-weeding running grasses, horsetail or bittercress, and while recognising the virtues of any variety of plant he would also have known its nuisance. He says for example: ‘The roote of Rest Harrow or Petie Whin is long and very limmer, spreading under the earth, and doth often times let, hinder and stay both the plough and Oxen in toiling the ground’. However, ‘the barke of the roote taken with hony, provoketh urine and breaketh the stone’. Elsewhere he explains how darnel ‘is a vitious graine that cumbereth or annoyeth corne,’ and yet, ‘with pigions dung, oyle and linseed, boiled and layd plaisterwise upon wens doth dissolve and heale them.’ Bracken in the wrong place disrupts upland and hill grassland, but in the past was an important resource in its own right, for fuel and soap production.

I’m thinking that the process of writing is very much like weeding – it’s all about taking things out, for the good of the whole. Not just at the editing stage, (which is more like the final tidy-up before winter) but the whole way through writing a novel. It’s always about giving enough space to the significant idea or image, not letting it be choked with superfluous word-clutter or unnecessary infill. It’s a fight against those weeds/words of the subconscious, chattering mind that never shuts up; that never stops germinating, propagating, spreading sideways. Fields (or plots!) must be constantly gone over if they are to yield anything. Countless seedling ideas and thought-shoots ripped up and discarded before they get a hold, in order for a few to flourish… Hurrah for the weed-hook and the delete button, because the minute we stop weeding, the game’s over. At the best of times – we’re just keeping the wilderness at bay. Pretending that our thoughts are orderly, sequential, cultured, when really it’s a never-ending battle, above and below ground… 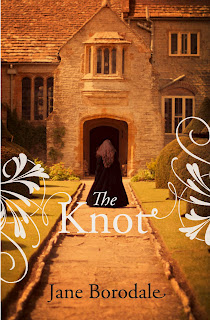 Jane Borodale’s novel The Knot is out in paperback with Fourth Estate - this Thursday!

There are plenty of weeds in it.

Hurrah for you Jane, and thank you--I'm a part time keeper of a small public plot and rampant weeds are far hardier than I--as for weedy ideas and mind chatter, well, there too, I could use some tending every day. The world is wild, so wild I often feel like a lost child amongst the overgrowth.

Relly lovely and informative - but don't overdo the weeding this spring, particularly dandelions - there are a lot of bees starving out there!

Don't worry Mefinx, there's little danger of me over-weeding, you should see the tangle of my garden! You're absolutely right about having bees firmly in mind. We keep honey bees here and it's made me very aware of the need to also plant useful, nectar-producing flowers for them and other insects...

And glad the world is wild with you, Ms.

I love the cover of your book! And it sounds really good..Love this post.

I did love this post - I have been muttering about the goose-grass this morning. Mefinx,you don't have to have dandelions to feed the bees,there are loads of lovely manageable flowers that they love. However, you can soak dandelion roots in water to get potash for your garden, and the leaves should always be composted, as they are full of nutrients. Dock, too, roots down to the subsoil and pulls up nutrients that have been washed down by all the rain this winter, so just slice the tops off with a hoe and compost them, leaving the roots to sprout again. Weeds ain't junk!

Writing IS like gardening - and though I totally agree about the weeding, I have found that in a novel,as in the garden,unforeseen ideas can pop up like self-seeding hollyhocks, in just the place where they ought to be, that you never thought of! Similarly, I often have to uproot something I thought was a brilliant idea to plant/insert into my plot, that turns out to be a sad mistake.
I shall be off to Kindle shortly to get your book, Jane!