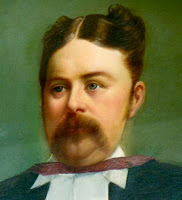 Dr James George Beaney was a flamboyantly successful doctor of the 19th century. The son of a labourer, he was born in Canterbury and apprenticed to a surgeon. Suffering from poor health, perhaps consumption, he sailed to Australia where he made a great success of being a surgeon who specialised in the scandalous areas of family planning and venereal diseases.

Short and tubby, with shifty blue eyes, fluffy moustache and strange coiffure, he loved to wear diamonds and other flashy ornaments. This earned him the nickname "Diamond Jim". He married but never had children and when he died he lavishly bequeathed his money to Good Causes. One of these gifts was £10,000 to the mayor of Canterbury to build a museum in his honour. 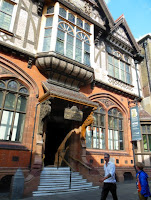 The resultant Beaney House of Art & Knowledge in Canterbury is exactly the sort of museum you would expect of an eccentric Victorian. Not only does it have a cabinet of curiosities, it is a Cabinet of Curiosities, with minerals, stuffed animals, relics, paintings, ceramics, Dutch stained glass, Ancient Greek art, savage weapons and even a stuffed duck-billed platypus. But whereas the Pitt Rivers Museum in Oxford makes you think of Indiana Jones's nightmare attic, this museum is Indiana Jones' parlour: much less crowded and more aesthetically pleasing. It was deservedly one of the finalists in the Museum of the Year award for 2013. Not only is the museum deliciously quirky, it's also hugely child friendly. And, by taking a tactile, fun, sensory approach it appeals to the kid in us. I actually spotted a pair of grown-up tourists trying on dress-up clothes next to a painting that depicts the martyrdom of Thomas à Becket. 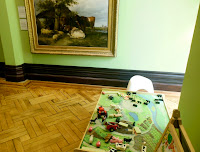 One grass green room is devoted to the bucolic paintings of Thomas Sidney Cooper, brother-in-law of Beaney's surgeon patron. There is nothing like stepping into a room and being confronted by the giant portrait of a bull (Charlie the Bull, to be specific). But in this room with cows, goats, sheep and other pastoral creatures so beloved by Victorians is a little model farm for children to play on. Isn't that clever? 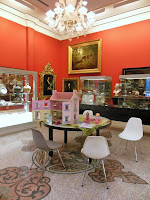 Another room – this one ketchup red – has a plastic toy doll house beneath a gorgeous chandelier and right in the middle of cases full of Greek pots, Romano British tiles, Victorian busts and a big case of antique doll's house furniture. No sidelining of children in this museum!

In many of the cases, curator Krystyna Matyjaszkiewicz has done something very right-brain and creative. She has arranged objects by colour rather than by function or category. This causes a cascade of inspiration as your brain's synapses struggle to make a connection between say: an electric blue butterfly, a lump of lapis lazuli and a kingfisher. 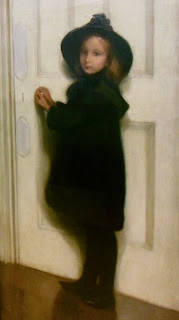 The juxtaposition of disparate objects is the stuff of memory improvement classes and writers' workshops so it comes as no surprise that the Beaney House of Art & Knowledge is keen on poetry and creative writing.

Here's an idea: Take three objects from any one case and link them together in a story. Or set a story in one of the doll house rooms. Or match a person from one of the portraits with a weapon or talismanic item.

Or why not write about "Diamond Jim" Beaney himself? Doesn't that name and face (top of post) cry out for an explanation?

One of the best-loved pieces in the collection is the haunting portrait of a little girl by a door. At first glance she seems to be a young witch, because of the conical silhouette of her black hat. But upon closer examination you see the hat has flowers. Black flowers. She's in mourning for her parents. This painting is almost certainly inspired by the life of the artist. Harriet Halhed was born in Australia and came to England as a six-year-old orphan to stay with her aunt near Canterbury. How frightened she must have been! We know that when she grew up Harriet Halhed trained with Thomas Sidney Cooper (the cow man) and also in Paris, and that she later exhibited her works to great acclaim and taught art to grateful students. But at this moment in her life, as a six-year-old orphan about to open a new door, anything is possible. Will she be happy? Will she be sad? YOU write the story. YOU tell what happens next.

The Beaney is currently hosting a competition for 8 and 9 year olds to write a story, poem or report entitled "A Visit to the Beaney". But any wannabe or established writer could fill a notebook with ideas gleaned from a visit to the Beaney Museum. Now that you've got the idea, you could try this out at Canterbury's kid-friendly Roman Museum. Or any museum in the world!

Caroline Lawrence writes for children and teaches creative writing courses at schools and museums. She is grateful to Professor Ray Laurence of the University of Kent for setting up her visit, and to Beaney curator Krystyna Matyjaszkiewicz for taking time to show her the museum. If you'd like to see more pictures from this museum and the Roman Museum, go to Caroline's Pinterest page.
Posted by Caroline Lawrence at 00:04

Its even inspiring to read about, dying to visit.

What a fabulous museum! Grouping the objects by colour - that is so inspired - and inspiring! Thanks for telling us about this.

How wonderful, and I love your comment about the Pitt Rivers! Spot on!

What a great idea, Caroline. I think I'll give it a go!

What a fascinating museum! Hopefully, one day I'll get a chance to visit.