After All That - by Louisa Young

I have been much engaged with Aftermaths recently. My most recent novel was set in the First World War; it required a sequel, so what choice is there? I wanted to call the sequel After All That; the publishers didn't care for it. Sales thought it sounded like the punchline of a laddish anecdote. I'd thought it sounded like Goodbye to All That. Ah well - goodbye to all that. We're calling it The Heroes' Welcome. I'm very pleased with it.

An aftermath is a very different thing to write about to a war. How can it live up? Nothing happens, except people sit about in shock, going 'Bloody hell, did I really survive that?' It's not quite so full of - oh, peril, and action and narrative drive. Plot. (And there is a funny modern issue when writing about this period - I don't want to use anything they used in Downton Abbey. And sadly, from flu to facial reconstruction, from class war to black musicians, Julian Fellowes has swept every corner to find all the obviously interesting lines of approach. He hasn't followed them very far, but he has certainly mentioned a great many.)

In a sequel, you have to go where history forces you. You can leap, of course, but the only direction, chronologically, is forward. I decided just to sit in 1919: a quiet year (so quiet that Juliet Nicholson called her book about it The Great Silence) but one during which, quietly, a great advance was made: the step from the end of the war (goodbye to all that) to the start of the modern age, the actual twentieth century.

The advantage of a sequel, of course, is that you know your characters pretty well by now. I knew what they would want, and I wanted to give it to them. They'd had quite a hard time of it in Book 1. I knew just what I wanted for Rose, the tall thin kind dry one, who'd nursed with a passion, who put up with everyone, who was in her thirties, who had no intention of getting married thank you very much.
And so it's back to the archives . . . .

And what a pleasure it is.

Eleanor Updale wrote very amusingly the other day about researching on line; for me this time it was wading back into the joys of serendipity and misdirection in searching on paper. I was in the bowels of the Red Cross building in the City of London, metal filing cabinets, rubber bands, friendly archivist, photocopies, old blue cloaks in strong cardboard boxes, fascinating distractions everywhere you look. And what I was after: the VAD Scholarship scheme.

Here it is - the letter Rose received: 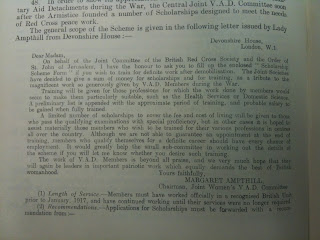 Dear Madam,
On behalf of the Joint Committee of the British Red Cross and the Order of St John of Jerusalem, I have the honour to ask you to fill up the enclosed ‘Scholarship Scheme Form’ if you wish to train for definite work after demobilisation. The Joint Societies have decided to give a sum of money for scholarships and training, as a tribute to the magnificent work so generously given by V.A.D. Members during the War.
Training will be given for those profession for which the work done by members would make them particularly suitable, such as the Health Services or Domestic Science. A preliminary list is appended with the approximate period of training. and probable salary to be gained when fully trained.
A limited number of scholarships to cover the fee and cost of living will be given to those who pass the qualifying examinations with special proficiency, but in other cases it is hoped to assist materially those members who wish to be trained for their various professions in centres all over the country.
The work of VAD members is beyond all praise, and we very much hope that they will again be leaders in important patriotic work which equally demands the best of British womanhood.

Length of Service. - Members must have worked officially in a recognised British Unit prior to January 1917, and have continued working until their services were no longer required.
Recommendations. - Applications for Scholarships must be forwarded with a recommendation from :-  (a) The Matron ...   ...   ...    For Nursing Members working in Military Hospitals.
A new Medical Certificate will be necessary.
Age Limit. - 20-40.
Standard of Education. - Certain Scholarships will require a high and definite standard of education which will be taken into consideration.
Applications.- Application should be made before March 31 1919.
Further correspondence. - When a form has been filled up by a Candidate, forwarded by her Officers, and approved, further correspondence will be carried on confidentially with the Member with regard to the amount of financial assistance required and other matters.


There was the list of things she could apply for a scholarship to study, with numbers of how many applied, how many were given scholarships, and how much money was spent: 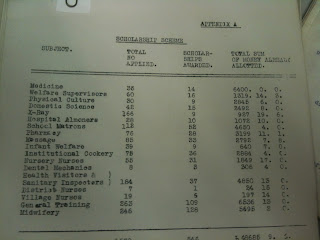 There was another story altogether, that of Eileen Price and her experience in Salonika, and her voice. How lovely that this should qualify. How right. And yet how easy it would have been, had the committee been made up of Jobsworths, to dismiss her application. (Author controls urge to race off down a different path. . .) 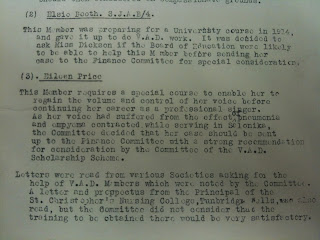 And here is the committee: all women. All rather interesting women. Revert to Google - yes. Very interesting. Early breastfeeding research . . .  orphans of Guernica . . .  differentiation of curricula for boys and girls . . .  maternal mortality . . .  League of Nations . . . identification of risk factors for breast cancer . . .  the first ever published epidemiological questionnaire . . . 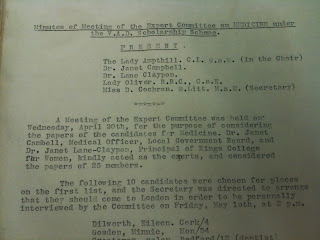 And here are the actual women who won the scholarships that Rose applied for: 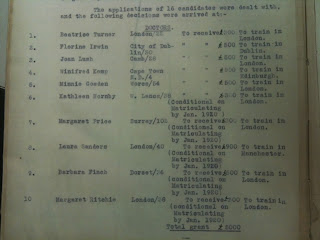 Later, I read in the records about the ones who pass and fail their exams, who apply for further funds for further training, and the one or two who, to the committee's great disappointment, drop out and get married. Because, and oh how easy it is to forget, a married woman did not work. That's it, ladies. Less than a hundred years ago we had to choose between our work, and our love, our children, our own family.

They also had this sweet alphabet book, put together by a talented nurse artist: here is her self-portrait. 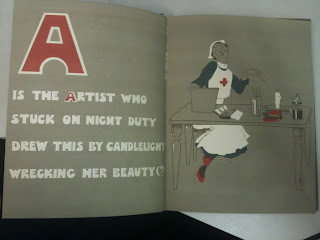 And here is her portrait of her colleagues. 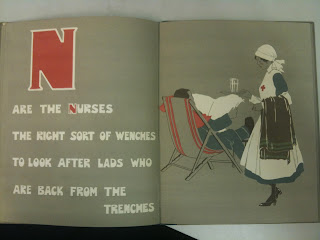 I was so happy to sit among the papers which would allow my dear character Rose, the right sort of wench, to honour her ambitions. I was so pleased to know who would have interviewed her, on what day, at what time even! I put Eileen Price in the waiting room with her.  Rose is going to become a doctor. This is how it would have happened. It may be a small, aftermath-of the-drama kind of thing, but it is her own life.
Posted by Zizou Alphonse Corder, PhD at 00:01

This has moved me to tears.

Wonderful alphabet book - thanks for sharing it!

What wonderful finds, 'My Dear, I wanted to tell you' is now on my Wish List, so that I can be ready for the next one!

How fascinating. Amazing what old papers can hold in their faded yellow pages.. thanks, Louisa!