The Nelson Business, by Laurie Graham

Horatio Nelson, only 47 when he died, was quite the celebrity in his lifetime. The fashion for naming children after him gave rise, inevitably, to people claiming him as their true father, a sort of 19th century version of  'I was Elvis's secret love child.'  It is the theme of my latest novel, The Liar's Daughter, published this week. 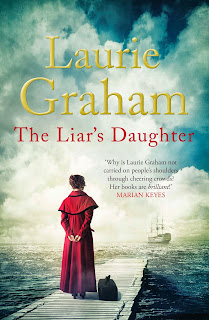 In some ways Nelson is a puzzle. He was, above all, a dedicated seaman and a very gifted tactician, a practical person, not grandiose, and apparently likeable. But he was also a canny self-publicist. After the battle of Cape St Vincent in 1797 he made sure the officer returning to England with despatches had his version of events which gave him the credit he was due but might not necessarily get. He also made the astute decision to present the surrendered sword of the defeated Spanish admiral to the city of Norwich.  Nelson was a Norfolk man but this gesture wasn't done out of sentimentality.  William Windham, the MP for Norwich also happened to be in the Cabinet and was rather well-connected. Getting on the right side of him was a fast-track to fame. Even the King got to hear about Commodore Nelson.

By 1800 Nelson was truly a public figure, and he played it to the full, wearing dress uniform and decorations at every opportunity. I don't think it was about ego. I believe he was always mindful of the precariousness of his profession and of the need to make money, whatever it took. He sensed that his life might be short and he had heavy financial commitments: siblings he wished to help; a wife and a step-son to provide for; Emma Hamilton, a one-woman money-frittering machine if ever there was one; and eventually his adored little Horatia. He stretched himself to the limit of his income to buy the house at Merton so she should have a settled and secure childhood. Or so he hoped.

He was recognised in the street. Wherever he was expected a crowd would gather to cheer him. His image began to appear on scent bottles and milk pitchers. And then he died. 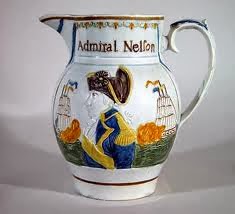 News of his death reached London on November 6th 1805, more than two weeks after the battle at Trafalgar. There was a run on supplies of crepe as everyone rushed to wear mourning. Then there was the long wait for his funeral. The Chatham, with his coffin on board, didn't arrive in the Thames until December 23rd. Plenty of time for the manufacturers of commemorative mugs and cameo brooches to build up speed. 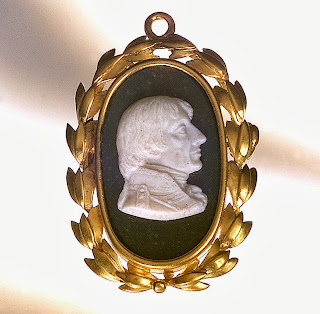 Nowadays you can find plenty of Nelson memorabilia on eBay. But the item bearing his name that particularly amuses me is the spiced rum known as Nelson's Blood. It's a good if slightly stomach-turning yarn, that Nelson's body was preserved in a leaguer of rum for the long journey back to England but certain seamen couldn't resist drilling a hole in the cask and draining off the rum to supplement their daily tot of grog. In fact it was brandy they stored him in, as reported by William Beatty, Ship's Surgeon to the Victory, and he should know because he was the one who prepared Nelson's body and helped place him in the barrel.

By the way, the seaman's daily tot was discontinued by the Royal Navy in 1970. For reasons of health and safety. They still splice the mainbrace though, on very special occasions. But that's another story for another day.

At home we usually mark Trafalgar Night (October 21st) with a dinner that features spiced rum somewhere on the menu. The entrée is a pigeon pie, known in this house as Nelson's Revenge, a reference to all the pigeon poop that lands on him in Trafalgar Square. But this year we're doing things differently. To celebrate the publication of A Liar's Daughter we'll be attending the annual Trafalgar Dinner in the magnificent Painted Hall of the Royal Naval College in Greenwich. Dress code, black tie or mess undress.  Or in my case, posh frock.

The Liar's Daughter is published by Quercus, price £16.99

Wow!!! This is nice moments you spend with your creativity.

Congratulations on the book, Laurie, and hope that your posh frock do was highly enjoyable.

Now I must read your book and find out about your "one-woman money-frittering machine" which doesn't sound like extreme praise, as well as finding out what happened to his beloved little Horatia.