On Saturday I spent the day in Bath Theatre Royal watching the Globe's Touring Company perform all three of Shakespeare's Henry the Sixth plays in a day. 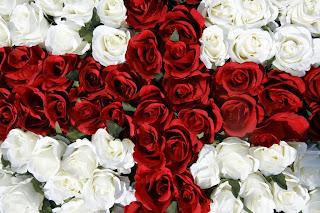 And very good they were too but this is not a review of them. I want to talk about the scene in the Temple Gardens (Henry Sixth, Part One, Act ll, scene iv)). In this production, the characters pluck roses of different colours not from bushes in bloom but from the floral St. George's cross on the coffin of King Henry V that has been conveniently left onstage to house swords needed for battles with the French.

The white rose of York is an ancient symbol thought to date back to its adoption by Edmund Langley, the first Duke of York, in the fourteenth century. The red rose of Lancaster on the other hand might not have been used symbolically till Henry Vll copied the York idea a century later after Bosworth Field (1485) and immediately united the two colours in the one Tudor rose - a brilliant piece of political spin.

However, the persistence of both symbols owes a lot to this scene by Shakespeare (and possibly other hands) in which members of the two factions identify themselves by their choice of flowers. By dating it to a generation before Henry Tudor won the crown on rather shaky hereditary grounds, Shakespeare did a lot to popularise the notion of The Wars of the Roses - a  phrase not adopted till the nineteenth century, thanks to Sir Walter Scott.

According to Philippa Gregory, whose White Queen sequence of books has been recently televised, it was known before that as The Cousins' War, for obvious reasons, since all the quarrels began from disputes about the hereditary rights of descendants of Edward the Third's many sons.

The nineteenth century was very good at producing ideas that stuck and became facts. Take the ravens at the Tower of London.


I have nearly finished writing the first draft of a novel featuring ravens at the Tower of London. It is set January - May 1536 (months that will ring - or toll - a bell with anyone familiar with Tudor history). And there were almost certainly no ravens kept in the Tower then. In fact there is a whole book about it - City of Ravens by Boria Sax, Duckworth 2012.

Wait a minute, I hear you say. What about the legend that if the Ravens desert the Tower, the city of London will fall? Or the one about the head of Bran (though you might be a bit hazy about that one). Or Charles the Second's charter to protect the birds? Well, they are all still there for you to hear in the famous Warders' Tours of the Tower.

But Sax has trawled through all the possible sources and there is absolutely no authenticated reference to ravens at the Tower till - you've guessed it - the nineteenth century. 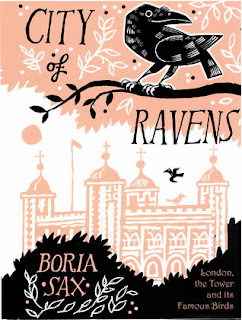 Of course I shall add a historical note to my novel saying what liberties I have taken. But will that be read or remembered or will I merely have added to another legend-as-history?

So, did King Alfred burn any cakes? Did Cnut command the waves to fall back (or was he demonstrating to his followers that he had no such powers?) Perhaps the Pope is not really a Catholic after all and bears defecate in tiled bathrooms?

Thomas Browne called widely-believed but erroneous ideas "Pseudodoxia Epidemica" or "Vulgar Errors" and wrote a book of that name in 1646. Some of the beliefs demolished therein were that the human heart is found on the left-hand side of the chest; that swans sing before dying and that salamanders live in fire.

Here are some more:

I'm sure you can think of many others!

Ah, but it is exactly the gap between reality and legend that leaves space, and makes a need, for stories! The belief that Charles the Second 'by royal decree' protected the Tower ravens forever, but a total lack of any such decree, left a lovely gap for me to fill with my Raven Boy story that 'explained' it all. It was fun knitting all sorts of real threads into my fictional story cloth.

I'd agree with Pippa, there, that the mixed weave of history and legend leaves pleasant and inspiring spaces for the insertion of the threads of story.

At the same time, I think it may be worth considering that ALL history is more akin to the artistic creation of a narrative than the scientific reconstruction of actual events.

If that was not the case, we would have no need to constantly revise our histories - which we do all the time.

History reflects how we feel now about the past, rather than adding anything to the past events themselves.

As such, both the legendary elements in historical narratives and the modern fictional representations add very valid colours and textures to the overall fabric of our understanding.

'The War of the Roses' is far more memorable - and in many ways meaningful - to us now than 'The War of the Cousins' could ever be, even if we were required to correct our history books with the deletion of one term and the insertion of the other.

Interesting. Would like to read your critique of Henry VI. I was planning to go to the Cambridge production but the only date that all 3 plays were shown on the same day, there was something else I had to see, slightly more compelling, so I didn't make it.

I was fascinated, re-reading the Shakespeare after watching "The White Queen", to see how many of the scenes were actually shown in Henry VI, including very similar dialogue - the meeting of Edward VI and Elizabeth Woodville under the oak tree in particular, and the meeting of young Henry Tudor with Henry VI where he names him as future heir.

What interests me in particular is how popular story and myth become accredited history over the distance of time.

I was in Bath on Saturday too - in the Mission Theatre with Julia Golding, talking about our different approaches to Arthurian legend!

Very interesting about the Wars of the Roses, and about how much of our 'history' comes from legend and drama. Shakespeare has a lot more to answer for in re-writing popular history than the history books themselves!
Richard III is still the most controversial example I can think of, with people still getting hot under the collar about the good king/evil villain debate today!

There's always the "what" that apparently happened - all those killed in the Wars of the Roses - but the "why's" seem endlessly complicated and shaded.

You've all said such interesting things.
In the gap between reality and legend lies a mystery, and we all love a mystery.

It's also true that each generation rewrites history, which is more a reflection of that generation than of what actually happened way back when.

I, too, approached the Arthurian legends in my novel. Knowing they were legends, I researched the history on which they might have been based. That mysterious gap was fun to explore.

I saw the plays in Bath, too,although I spread them over three days so only saw the last one on Saturday.