I was planning something pretty earnest for this month, but it needed a photo specially taken in London, and a change in my travel plans means it will have to wait for another time.
Photo by Adam Jones adamjones.freeservers.com
via Wikimedia Commons

My first idea for a replacement was something equally worthy.  I thought I’d give an example of how profoundly the Internet has affected the research process.  I was going to illustrate it with the story of my own quest, ten years ago, to find a fragment of a torn 17th century letter, which turned out to be in the archives of an ancient British bank (the main body of the sheet being in Australia).
Back at the turn of the century (and even though the Internet was beginning to make our lives easier) the shoe-leather side of historical research took ages. We still had to consult card indexes, with all their vulnerability to misfiling, illegibility and loss. Sometimes, a long journey to an archive would result in disappointment: either the thing you were looking for was not there, or there was a policy that only the staff could undertake a search. They were unfailingly helpful and polite, but they were inevitably operating at a disadvantage – not really knowing what you were after, no matter how good the brief; blind to the resonance and inspiration of apparently irrelevant items; prisoners of the little summaries written by the original cataloguers, who had read the documents with the preconceptions and value judgments of their own time. 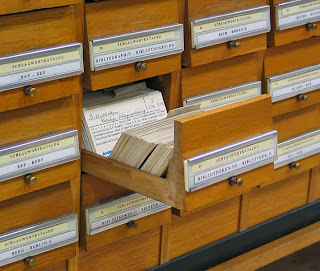 Photo: Dr. Marcus Gossler, via Wikimedia Commons
Even then, some libraries would communicate only by post, and demanded written references to show that you were entitled to ask a question in the first place.
So much of that has gone.  If anything, the problem now is wading unaided through a superfluity of undersourced information.  But uniting the two halves of that letter would probably be a quick job these days...

... Or so I imagine.  I didn’t get as far as that comparatively simple task.  Instead, caught up in the egg-whisk of the search engine, I hit on the idea of seeking out a digital image of a random 17th century letter from anyone, anywhere, and unpicking it for you. So I put in some very broad search terms (digital, letter, archive, university etc) just to see what would pop out of the Internet Lucky Dip.
The very first search result was from Duke University in North Carolina, USA. 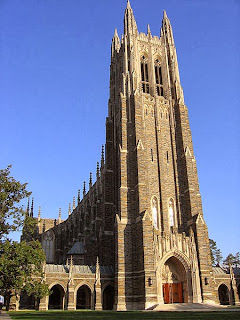 As it happens, there are some distinguished researchers in my period there, so I thought it was all ‘meant’, and I clicked on. And that’s when you were rescued from my plan, because what I hit on was the most wonderful archive of AmericanTV advertising.  Duke has put online thousands of television commercials created or collected by the D'Arcy Masius Benton & Bowles advertising agency.  They date from the 1950s to the 1980s. 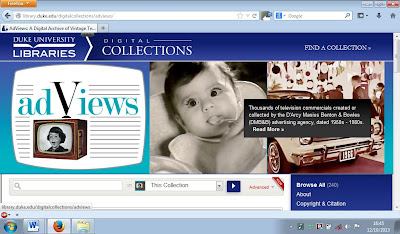 If you know my book Johnny Swanson, you will understand why my heart leapt.
Part of the plot of that book is based on 1920s classified ads, so I was already primed to relish diving in to one of the best resources for getting a feel for the social tone of a time and place.

If ever you fancy a lost afternoon, this digital archive is the place to go. It’s the reality behind Mad Men, with all the deification of doctors, flagrant peddling of bogus science, and manipulation of maternal concern.  Everything is interesting: the scripts, the camera angles, the clothes, the narrative structure of the ads, and the extensive exposure of children’s bodies, in a purely innocent way that would be unthinkable today. As you would expect, the unintentional humour trumps any real jokes.

I would love to embed some of the films here, but there are threats about copyright, etc, so here’s the link:
http://library.duke.edu/digitalcollections/adviews/

I particularly recommend the ads for Vick’s vapour rub: 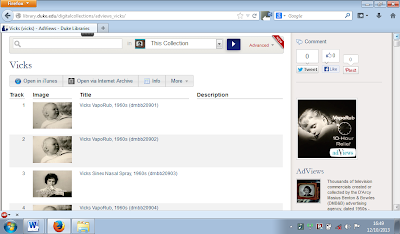 http://library.duke.edu/digitalcollections/adviews_vicks/
Of course, my interest was entirely academic and soberly historical (ahem). Duke University is, without doubt, a highly respectable place with a serious and important archive. These advertisments are just as important historical sources as the letter I meant to look for.  But they're fun too.  If you need a bit of a diversion from real life, and don’t mind losing a huge chunk of work time, give this archive a click.

That is a rabbit hole, deep down into my childhood! I clicked on a couple of Schick ads and got the glamor of cigarette smoking, plus a woman receiving a leg shaver for Christmas. She was very happy about it.

Oh Eleanor - you are a wicked woman! I may never be seen again ...

Torrential rain in the Scottish central belt this morning = productive work morning. But now I found something way more interesting to do, browsing archives brings out my librarian inner soul.