'Two for Joy or Double Trouble?' by Karen Maitland

I love old words. Fluppy – isn’t that a great word for 'careless'? Murfles meaning 'freckles', or skingy meaning 'nasty, bitter weather'.  But the other day I came across another old word that has a curious and dangerious origin, by-leman which means a 'second lover'. 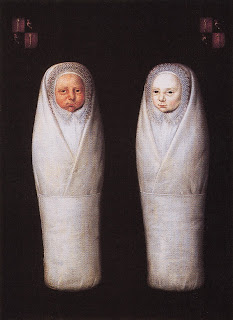 A by-leman was linked to wildly-held belief that if a woman gave birth to twins she must have slept with two men, each of whom was the father of one of the infants. I wonder how many innocent women were unjustly punished for adultery, just because they gave birth to twins.

An even older belief, thought to be Celtic in origin, was that the second twin to be born was the offspring of a spirit-lover (or in later Christian times, the devil himself) with whom the mother’d had intercourse after she’d slept with her human lover. As soon as the twins were born, the younger twin would be taken to a place which was associated with spirits or magic, for example, where there was a flying thorn bush (one that grew out of a crack in a rock) or a rocking stone and the baby would be left there to take his chance in the elements. The intention was not to kill the infant, but to allow the spirit-father to reclaim the child if he wished. This belief became incorporated into the legend of Sir Lancelot who was said to be a younger twin raised by faerie folk. 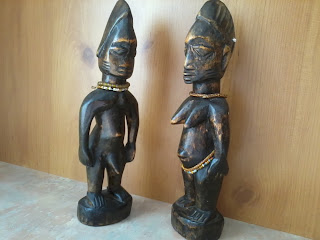 The mystique surrounding twins is not confined to Europe. When I worked in Nigeria I was given a pair of ibeji, carved wooden statues from the Yoruba people. There is a very high incidence of non-identical twins born to Yoruba women, around 5% as opposed to the European average of 1.2%. Some studies have suggested it is because yams are the staple diet which are high in phytoestrogen which stimulates the release of eggs, others maintain it’s simply a genetic predisposition. But infant mortality was high and it was not uncommon for one or both twins to die. So when twins were born, the family had ibeji images carved, and if one of the children died, the statue would treated just like a living child, dressed, fed, put to bed and carried around. They feared that if the spirit of the dead child felt neglected, he might wreak vengeance on the family or cause the death of the other infant because he wanted his twin to play with.

A similar belief used to be common in England too. The bond between twins was thought to be so strong, that if a twin died, it was thought that either the living twin would quickly be called into the grave by their dead sibling who was lonely, or else the strength of the first twin would enter the living one, giving them great powers. A surviving twin, known as a ‘left twin’ would be called upon to cure afflictions of the throat by blowing three times into the sufferer’s mouth. A surviving male twin was required to cure a female patient and female twin for a man. 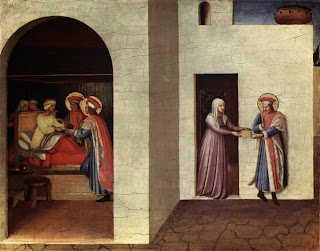 Of course, the magic surrounding twins means they featured in many myths and legends. There are even twin saints – Cosmas & Damian, who are the patron saints of apothecaries and were credited with performing a leg transplant. They were among the favourite saints of the Medici, who promoted their cult, which is a little surprising since the saints were known as ‘the moneyless ones,’ because they refused to charge for their services, hardly an example the Medici clan seems to have followed. 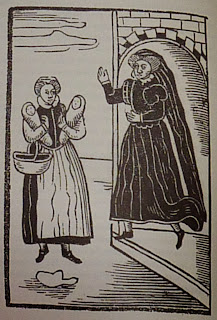 But perhaps the mystery surrounding twins has not entirely disappeared. Only a few weeks ago I was coming down a flight of stairs, when a woman coming up stepped back down, though there was plenty of room for both of us. She jokingly said that if we passed on the stairs one of us would have red-headed twins. And I remember an elderly aunt who always said that whoever began pouring the tea from the teapot must continue until a new pot of tea was made, otherwise the second pourer would give birth to twins. It seems we still find magic in the birth of twins.

And strange that having twins should still be seen, even in folk lore, as some sort of punishment. (Won't tell my daughter, or her identical boys!)

I feel anxious for those poor mothers, accused of adultery. Maybe that's a possible reason for the one twin being so often "lost" in stories? I am intrigued by where and how you discover these fascinating facts, Karen.

Gulp! Yet another reason to be grateful for living where and when I do! (says another mother of identical boys, who has certainly never had the energy to have sex with two different men in one night, even if one of them WAS a demon!)