In a few days’ time, Twelve Years a Slave will open in UK cinemas: a new film by the mightily talented – and strikingly named – British director Steve McQueen, who has been the recipient not only of various film gongs, but also of the Turner art prize. The film features McQueen’s long-term collaborator, the (equally talented) actor Michael Fassbender, and, as with the duo’s other recent films Hunger (about Bobby Sands) and Shame (about sex addiction), I fully expect that Twelve Years will be both brilliant and, in places, hard viewing. Brutally hard viewing, in fact: as the title makes clear, the subject is slavery. Indeed, the film’s unflinching depiction of the punishments and physical abuse inflicted on slaves has already caused controversy: reportedly, at a screening at the Toronto Film Festival, several people walked out.

During a recent BBC news item on the film, Michael Fassbender said of the violence: “I just felt it was necessary – because that’s the reality of it. And if we really wanted to do justice to [the] story, who are we to decide where to censor?”

I agree with him, and yet – lacking a strong stomach myself, and dreading not just the physical but the emotional abuse depicted (one review says that a scene in which a female slave is separated from her young children is even more gruelling) – I’ve been wondering whether I’ll have the courage to watch this film. I don’t want to wimp out – especially when the subject is such an important one. But violence and trauma on the big screen can be overwhelming, in a way that they aren’t on the page. And so, to give myself at least an idea of what to expect, I decided that first I should read the book on which the film is based. 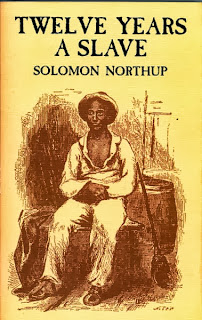 I’m very glad I’ve read it – and not just because it’s given me a heads-up on the film. I’m wondering, in fact, why on earth I’ve got to grand old age of 43 without someone pressing this book into my hands. It is an extraordinary memoir, and an extraordinary primary source: a first-hand account of what it was like to be a slave working in the cotton and sugar cane plantations of the southern United States, written by a man who had a great narrative gift.

That man was Solomon Northup, a free-born African-American who, in his 30s (a married man, with 3 young children), was kidnapped and sold into slavery in Washington. The year was 1841. Twelve years later he regained his freedom, and embarked immediately on writing an account of his experiences. The finished work - which was first published that same year, 1853 - is a gripping, desperately moving read.

Northrup was clearly a talented writer: his story has as many vividly drawn characters, as much fascinating detail, as much drama, conflict and heartache as any novelist could wish for. In addition, however, what makes this book agonisingly compelling is its intense flavour of recent personal experience, plus Northrup’s constant awareness that those of his fellow slaves who had not died in the weeks since he regained his freedom were still, even as he wrote, enduring the inhuman treatment he was describing, without any prospect of release except through death.

Not only that, but Northup knew there were many people in his country at the time who argued that the life of a slave was a happy one; he stresses repeatedly that the astounding brutality he describes is not an exaggeration. This brings Michael Fassbender’s comment to mind again: “If we really wanted to do justice to Solomon’s story, who are we to decide where to censor?” How could they justify underplaying the suffering that Northup had described so eloquently and urgently?

But Northup’s is not a story of unremitting brutality. Bought and sold several times, he encounters kind slave owners as well as cruel ones, and what makes the memoir yet more fascinating is this breadth of experience and the fact that his views are so nuanced. The kind slave owner is a rare creature, Northup says, but he wants the reader to know that such a person does exist. One such is William Ford:

…there never was a more kind, noble, candid, Christian man than William Ford. The influences and associations that had always surrounded him, blinded him to the inherent wrong at the bottom of the system of Slavery. He never doubted the moral right of one man holding another in subjection…. Brought up under other circumstances and other influences, his notions would undoubtedly have been different. Nevertheless, he was a model master… and fortunate was the slave who came to his possession. Were all men such as he, Slavery would be deprived of more than half its bitterness.
[p.90]

Another is a twenty-year-old single woman called Mary McCoy, whom Northup describes in such angelic terms that I was reminded of Dickens:

She owns about a hundred working hands, besides a great many house servants, yard boys, and young children…. She is beloved by all her slaves, and good reason indeed have they to be thankful that they have fallen into such gentle hands. Nowhere on the bayou are there such feasts, such merrymaking, as at young Madam McCoy’s. Thither, more than to any other place, do the old and the young for miles around love to repair in the time of the Christmas holidays; for nowhere else can they find such delicious repasts; nowhere else can they hear a voice speaking to them so pleasantly. No one is so well beloved – no one fills so large a space in the hearts of a thousand slaves, as young Madam McCoy…
[p.284]

While Northup’s sojourns with humane owners are unfortunately brief, his discriminating eye does not desert him when he comes to describe those who have done him terrible wrongs. He can see, for example, the damage done to the family of the hideously cruel slave owner Edwin Epps, as his twelve-year-old son, who “possessed some noble qualities”, is taught to mistreat slaves, young and old, in imitation of his father.

Northup also paints arresting portraits of the slaves about him, from the elderly Uncle Abram, to the young mother Eliza who is separated, agonisingly, from both her children; from Lethe, consumed with violent rage at her situation, to Patsey, who suffers horribly because she is a target for the lustful attentions of Epps (played by Fassbender in the film), thereby earning the hatred of his wife – a hatred that turns out to be life-threatening.

Northup brings us among these people, and takes us with them to the cotton fields, where we see in detail the slaves’ punishing daily routine. Being a resourceful, intelligent man, with useful skills – for example in engineering and violin playing – Northup gains a few privileges from some masters (though not all these ‘privileges’ are desirable). With Northup we experience an attempted escape through a crocodile-infested swamp, the hard-earned comfort of Christmas celebrations, endless fear-filled working days, and his extraordinarily courageous attempts to fight back (literally) against a cruel master (with Dickens already in mind I inevitably thought of Nicholas Nickleby here, although Northup – unlike Nicholas – suffers an attempted lynching for his pains).

The story of how he came, ultimately, to regain his freedom is so nail-bitingly dramatic that it could have come straight from the pen – or laptop – of a Hollywood scriptwriter. It is simply breathtaking to remember that this is a true story. But what is most heart-rending about the denouement is the reaction of the other slaves as Northup – or ‘Platt’, as his owners have called him – says goodbye:

The UK premiere of Twelve Years a Slave will take place on October 18th.
You can view the film's trailer here.

I don't know if I'll see the movie, but your review of the book is excellent.

Really glad to read your comments on reading the original "Twelve Years" book. The sort of reading that might just make it possible to watch the film itself, though I'm still not sure.

Thank you Harriet, certainly a film to see, if I can bear it. And another book to read, most definitely.

Thanks, Harriet! You've inspired me. I'm going to read it!

Many thanks Petrea, Penny, Mark and Caroline. It's *definitely* worth reading and, with such a strong team involved in the film, I'm sure that's worth seeing too if you can bear it.

Thanks Harriet, am so looking forward to this film, which sounds wrong in a way, like 'liking' something horrible on FB. But still a brilliant team tackling a subject which in the past has rarely (if ever?) tackled properly and seriously.

I absolutely agree, Catherine - I can't think of a better team to do it. I'd be really interested to hear what you think of the film when you've seen it.