The ancient festival of Samhain, possibly from old Gaelic meaning Summer’s End, was held on November 1st as, traditionally, the first day of Winter. It was meant to coincide with the final day of the Harvest, although, due to varying weather conditions, this might not have been true in fact. In addition to marking the end the natural year of growing for all living things it also commemorated the passing of human souls from this world. When tradition melded with Christianity it became the modern day Feast of All Hallows (All Saints)

And so, the day before this feast, the ‘eve’ (October 31st) was All Hallows Eve = Hallowe’en. Not a modern invention then, but an ancient Celtic festival with a mixture of the pious and the pagan. Even now, old beliefs persist that on Hallowe’en the veil between the living and the dead is more easily drawn aside. On this ‘Feast of the Dead’ spirits may walk abroad and therefore, if you must be out and about, ‘tis best to adopt a disguise…

When I was young we called it ‘guising’ – going out in disguise – and we did this with great enthusiasm every Hallowe’en. Trick or Treat it definitely wasn’t. And even today in Scotland the children generally do not beg and do not play tricks. It’s more a case of trawling the houses of neighbours, friends and relatives where, before any loot is collected, you must provide a simple entertainment.

Props and prompting are allowed. I laughed out loud one year when a boy came into my house and proceeded to read his jokes out from a book that was overdue from the library where I worked!

Excitement built up from early October when decisions re costumes had to be made. None of this shop-bought stuff or an e-bay effort. Pah! We made our own – well I did when young and for my kids too. One year I had to stuff a dozen or so rats and attach them to a string so that they could trail after the Pied Piper as she went along our street. There was a memorable Rubik’s Cube. A unique idea I thought, as I measured, cut, glued and dried globby strips of painted squares with a hairdryer. I sent my son off to the Scouts Hallowe’en Party with high hopes of a prize, only to be downcast when he returned disconsolately, announcing that there had been five other Rubik’s Cubes present!

And yes the adults join in, not actually going door to door looking for sweets and nuts and tangerines, but decorating the house and dressing up in the general spirit of having fun. I managed to find a pic of me in my famous Princess Leia costume. If you look closely you’ll  see the two large safety pins on each shoulder holding together the white bedsheet. Some brown wool plaited, twisted round into her famous ‘earphones’ hairstyle and  skewered to the side of my head, a pair of white leggings scissored in two and pulled on over long boots, a borrowed light sabre, and I was good to go. On that occasion I was accompanied by a rather scruffy coal miner – note the historical accuracy of the miner’s safety lamp and the rat-proof ‘piece’ tin hanging from his belt and also his trouser legs tied in nicky-tams.

Every year we played the same games. My mother would smear thick treacle on scones and hang them on strings from the kitchen pulley from where, hands behind backs, we tried to snatch bites. Dooking for apples in a basin, then slicing it in half across to reveal the  pentagram shape inside. If you put this 'star' under your pillow you’d dream of your true love. Or you might peel the apple trying to keep the peel in one continuous piece. Then you stood with the moon shining over your right shoulder and threw the peel over your left shoulder. When it lands it will form the shape of the initial letter of the person you will marry. Hopefully the same person you dreamed about, if you were using two apples! I guess these customs date back to when signs and portents were commonly used to foretell the future.

An indication of our times is that now an adult will accompany children as they go about the local streets. It’s a family night to enjoy and the children know the rules - out at dusk, only approach houses where you know the occupants and where porch lights are lit and curtains are open, and safe home by 9pm.

And now the answer to the puzzle from last month’s Blog re the Cabinet of Curiosities: 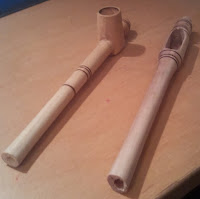 The two objects pictured are hand made from wood. They were integral to Uzbek family life as far back as anyone can recall and are still in use, mainly outwith the towns and cities. Although used separately their purpose is the same.
Thanks to those who sent their suggestions – one person did deduce their use. Not a ball & string game, nor anything to do with sewing, knitting or weaving, and less opium pipes than ‘peeing pipes’. In some areas of Uzbekistan young babies are tightly swaddled and the small wooden tube is positioned in the appropriate place. The design of the pipe chosen depends on whether its for a boy baby or a girl baby. We saw cradles for sale in the markets where a hole had been drilled through the base to allow the urine to run through into a small pot sitting below.

Well done Ann Ward who scored a hit with her suggestion!!

Posted by Theresa Breslin at 01:30

How fascinating about those two objects!

Congratulations on the elegant simplicity of your costume. I've done costuming for years in science fiction fandom and take pride in keeping it simple. I'm not a skilled seamstress and never learned to use a sewing machine, so anything I made was by hand. And I've won prizes! Some time in the SCA mediaeval society taught me about a thing called a T tunic, which you can use as the base for many costumes, and a very simple cloak.

I often come across people who think Halloween is a modern American invention and sneer at it. But the American ancestors came across the ocean with ancient traditions, including Samhain...

Thanks Sue - I'm not a skilled seamstress either. Princess Leia was a bit thrown together but it was just for fun. The T tunic sounds like a really neat idea.