Quests for the Holy Grail... can they ever succeed? – Katherine Roberts

One of my characters, Rhianna Pendragon, has just finished a Grail Quest. Her quest has been a long one, taking place over four books and coming to a conclusion in the final title “Grail of Stars”. Although this series is aimed at younger readers, writing these books has taken me to some surprisingly grown-up places. Let me take you on my quest.

First of all, it helps to know what you’re looking for!

So what exactly is a ‘Grail’?

Many people think first of a cup or chalice. This arises from the Biblical story of the cup used by Christ at the Last Supper to offer his disciples wine. “This is my blood,” he tells them. “Drink in remembrance of me”. Later, so the story goes, Joseph of Arimathea used the Grail to catch Christ’s (real) blood as it dripped from his crucified body. Hence the name 'Holy' Grail.

A grail might also be a platter or plate, a cornucopia (or horn of plenty) magically overflowing with food, a book full of knowledge, or even a magic stone.

Obviously, there is more than one aspect of the Grail, and I think it can actually take any shape you wish, appropriate for your own quest. At the start of her quest, Rhianna does not know exactly what her Grail looks like, although she has a vision of a dead knight on a ship holding something "too bright to look at" in his hands.

Next, we need to know where our Grail is hiding.

If you continue with the story of Joseph of Arimathea, he hid out in a tomb where Christ's blood sustained him, then carried the cup to Britain and settled at Glastonbury, which at the time was a Roman outpost. The Grail found its way into Corbenic Castle, where it was kept under guard by maidens and a maimed (or wounded) king, sometimes called the Fisher King. Gradually, over the centuries, the location of this magical castle was forgotten, until it turns up again in Arthurian legend, when a vision of the Grail appears to the Knights of the Round Table floating on a beam of light, inspiring them to ride out in search of it.

Another story claims the Knights Templar took the Holy Grail from Jerusalem during the Crusades and kept it in a secret location until their order fell from grace, when the Grail (together with the fabled Templar treasure) was lost from history and passed into legend.

The pagan Cauldron, on the other hand, has always belonged in the Celtic otherworld of Annwn, where those seeking its magic need to travel beyond the earthly realm to find it.

Since my series is set in the Dark Ages shortly after the Romans left Britain, I decided Rhianna and her friends must sail through the enchanted mists to look for their Grail - echoing the Celtic tales.

Who quested after the Grail?


In Taliesin’s story Spoils of the Otherworld, King Arthur and his warriors sail to the Celtic otherworld in search of the Cauldron of Annwn. They find it on an island in a castle of glass, where it is guarded by nine maidens. But in the end they have to abandon their mission, because the castle’s magical defences prove too dangerous. Only seven men return home.

In later Arthurian legends, Sir Percival makes it into the Fisher King’s castle, but fails to ask the right question and leaves empty-handed. Sir Lancelot reaches the castle too, but finds the gates barred to him because of his adulterous love for Arthur’s queen Guinevere. Sir Bors gets into the castle, but does not try for the Grail. Only young Sir Galahad, the most pure-hearted of all the knights, is allowed to gaze upon the Grail - but instead of taking it back to Camleot for his king, he ascends, fulfilled, to Heaven.

Indiana Jones finds the Grail in the Last Crusade, guarded by an ancient knight in a cave protected by lethal traps.  Here, he is presented with a choice of vessels ranging from beautiful jewelled goblets to plain wooden cups. He chooses the right cup and uses it to heal his dying father of a mortal wound – only to lose his Grail again when his enemies seize it from him and try to take it across the seal into the world of men.

Dan Brown’s The Da Vinci Code takes a different approach to the Grail, based on the text Holy Blood Holy Grail, where the Grail is actually the bloodline of Christ, surviving to the modern day in the form of the hero’s female companion. Following the Knights Templar trail, his characters chase clues across the world, ending up at the Rosslyn Chapel in Scotland, and giving Scottish tourism a welcome boost along the way.

Monty Python also sent King Arthur and his knights in search of the Grail, taking a comic approach to the legends that sees his brave knights using coconut shells instead of horses and fighting killer rabbits - great fun!

There are countless other books and films containing quests for Grails of all shapes and sizes, and now young readers have Rhianna Pendragon's quest for the Grail of Stars. 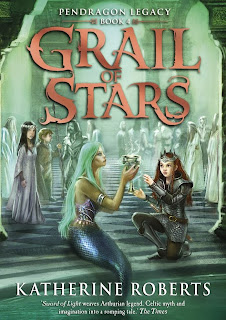 Rhianna needs the Grail to wake her father King Arthur from his death-sleep in enchanted Avalon and restore him to the throne of Camelot. In the normal course of events, she would succeed in her quest and the series would have its happy ending. But  - as a sharp-eyed librarian pointed out at an early event for the first book “Sword of Light” - we already know her quest fails, because so far Arthur has not returned.

Cue time-twisting plot to get out of a sticky corner? Well, no… Arthur might not have returned from Avalon to save us all yet, but that doesn’t necessarily mean Rhianna fails to find the Grail, because something else could easily happen after she wakes the king to prevent him from returning to Camelot. I decided it would be too much of a let down if she didn't find the Grail at all, so on the cover of book 4 you’ll see Lady Nimue (the mermaid) handing Rhianna something rather Grail-like… but from the Grail Quests mentioned above, we already know that finding the physical object is no guarantee of success! The quest for the Grail has always been a spiritual one. In the end I decided the only way to write a true Grail Quest would be to allow Rhianna herself to tell me the outcome... which brings me to the question Sir Percival failed to ask.

In the legends, this traditional question is “Whom does the Grail serve?” In book 1, the villain Mordred (upon waking terribly injured from his duel with King Arthur) gets this question twisted and asks: “Who commands the Grail?” This is clearly the wrong question, since four books later Mordred loses his quest for the throne of Camelot because of his thirst for power.

Rhianna’s question is different. Lady Nimue asks her “What does the Grail contain?” At first Rhianna (like me when I began writing the series) doesn't know - her first impulse is to answer "stars" but the song she has learned from Merlin says "the Grail said to hold all the stars in Heaven" so she changes her mind. Only towards the end of the final book does she realise what her Grail really contains, and that led me to a natural conclusion for the series.

As an author, I often feel I'm on a quest as I write a book. I suppose my Grail – my ultimate quest – would be the perfect book, which contains all the energy I meant it to contain when I began writing, which makes my readers laugh and cry in all the right places, which is enjoyed by everyone in the world from six-year-olds to great grandmothers, which brings Hollywood knocking at my door, which means I can buy my dream castle and fill the stables with unicorns... oh, but wait! If I wrote that book, the perfect book, then I would never DARE write another word! There could be a good reason Sir Galahad did not take his Grail back to Camelot, and I think the truth is you can never quite find the Grail, at least not in this world.

So what does your Grail look like? (And would you really want to find it?)

More details from www.katherineroberts.co.uk
Posted by Katherine Roberts at 02:00

I enjoyed your post. I did a lot of research (into both myth and history) for my Arthurian novel, "Camelot & Vine," a very different tale from yours. The ancient stories are so rich and varied that we can retell them forever. Maybe that's what makes them myths in the first place.

Interestingly the Grail Quest is also a main feature in my recent novel MOON LORD. In my two books I examined the earliest roots of the Arthurian legend, setting the action in the British bronze age circa 1900 BC rather than in the more usual Dark Age or 'fantasy-medieval' eras. In MOON LORD, I used the Dagda's Cauldron of Plenty as inspiration, and set the scenes with the Grail around Newgrange in Ireland, but the physical appearance of the 'Grail' itself was not a cauldron but based on the Rillaton and Ringlemere cups--two golden beakers dating to the bronze age, both associated with burial mounds. One of them was certainly for ritual use--its bottom was curved so that it could not be set down; it must have been passed from hand to hand in some kind of rite (some have suggested a male drinking cult existed in ancient Britain, with intoxication being used to get you closer to the spirit-world!)
In MOON LORD, the 'Grail' was more of a symbol to the people that something that actually had any real powers. Its power was in that people believed it was a force for fecundity and wealth.
J.P. Reedman

That sounds an interesting Grail, Janet. Yes, I think the spiritual aspect is more important than the object itself... perhaps that's what attracts so many writers to the subject?

Mind you, it doesn't seem very many History Girls are on Grail Quests at the moment! Come on, don't be shy... what does YOUR Grail look like?