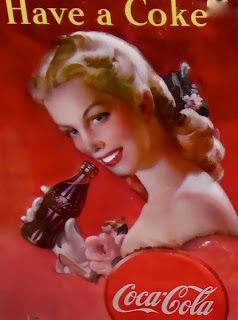 I was in Bath Spa last weekend for the Bath Kids Lit Festival and went to hear David (Skellig) Almond and Sally (I, Coriander) Gardner talk about how they write. Both of them struggled at school, especially Sally. She was severely dyslexic and only learned to read when she was fourteen. But she said she always loved the shape of words. The Coca-Cola logo seemed particularly beautiful to her, and immediately identifiable. David Almond said he also noticed words as art. He was especially attracted by graffiti. Sally agreed, and added that many graffiti artists are dyslexic; they love words and their art is a way of expressing that love. 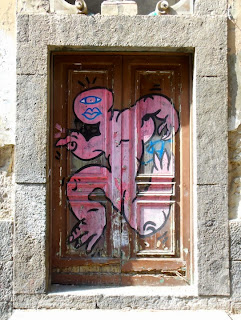 Their discussion of graffiti got me thinking. One of the things I am always interested in is the continuity of human behaviour throughout the ages. Ancient Romans loved graffiti, and so do their modern counterparts.

I was in Naples the week before last, visiting sites connected with the Roman poet Virgil. As a classical archaeologist and historian, I knew should be taking photos of columns and amphitheatres but my camera kept snapping the amazing graffiti I saw everywhere. On the one hand I feel dismay, that the Italians should so mar their buildings. But on the other hand I admire much of it. I appreciate the beauty of shape, colour and form that David Almond and Sally Gardner were praising.

Some of the Neapolitan graffiti is pure image: no words of any kind. They can be funny, beautiful, startling. For example, a bollard animated into a face. 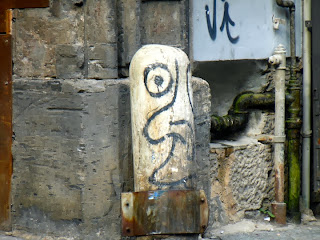 Some graffiti has words, slogans or acronyms embedded or "hidden" within. 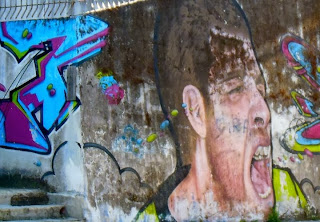 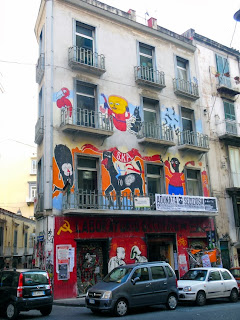 Some of the messages are quotes, like this one (below) by movie director and poet Silvano Agosti: Don't put flowers in the window of a prisoner's cell [because if one day the door should open, he will not want to leave.] 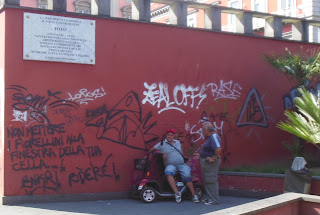 Political slogans are popular, e.g. Tremonti & Napolitano are slaves of the middle-class. 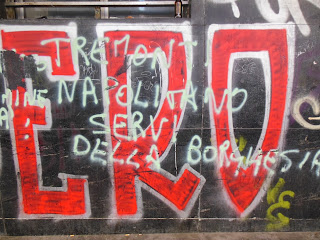 And, just as in Roman times, sometimes graffiti expresses longings and passion. Each one suggests a story behind it, or a hundred stories! 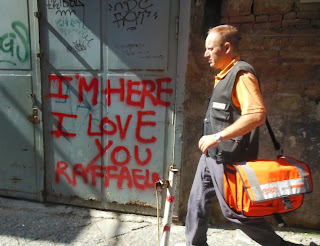 Recently I was reading NAWE magazine and admired a creative writing exercise in which the teacher led her class around school to collect random lines from various places such as fire extinguishers, school notices and other signage. They they shuffled the phrases to make poetry.

You could do the same thing using graffiti in a city. So you might put together images such as a the ones above to make a poem like this:

Next time you're a passenger in a car, on a train or simply walking, look around and take note of the beauty and poetry of graffiti. Oh, and watch out for the Punk Beasts, too! 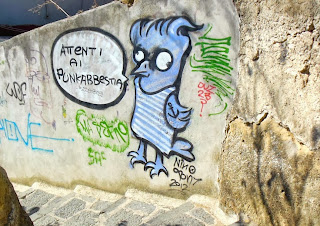 Caroline Lawrence is author of The Roman Mysteries & The P.K. Pinkerton Mysteries. She is currently working on ways of retelling Virgil's Aeneid and visited The Land of the Sibyl with Andante Travels.

Posted by Caroline Lawrence at 06:49

When we went to see the Pompeii exhibition at the British Museum I had to explain Mary Beard's graffiti translation to my 8 year old.

terrific post Caroline. There are some amazingly witty slogans on motorway bridges too

I went to Naples earlier this year, and I was quite shocked by the amount of graffiti on all the buildings--some really lovely old buildings scrawled all over with spray paint. Once I got over the initial surprise, I was able to appreciate it, but it was still crazily different to what I had expected.

It's so sad when they graffiti lovely buildings but with some of the uglier fascist architecture you don't mind!

When my sister recently was recently on holiday in Italy she sent us a photo of a graffiti which took her fancy - a rather charming smiley phallus. This made us wonder whether the old Roman belief in phalli as good luck symbols still existed or whether someone just got lucky :)

When I went to Bosnia we kept seeing the same piece of graffiti wherever we went in Sarajevo. Sure, we saw plenty to do with the war and with the current political climate, but the one we saw repeated the most was of an orange pussy cat with wings and a huge Cheshire grin - the Angelcat! It became a game to see if you could spot one next! We even saw one after a four hour trek to a remote waterfall, painted on a rock across from the lower part of the falls!

Annis and bookauhubooknook please send me pix of the phallus and winged cat. The former is most definitely continuity! flaviagemina [at] hotmail [dot] com