I was going to put up the following poem at the end of this piece but conscious of the fact that sometimes people don't read the whole post, I'm putting it right at the top because I want all visitors to this site today to see it. It's published here by kind permission of its author, Wendy Cope, and it is copyright to her, of course.

Fifty years have passed since we first met,

And forty seven since we said goodbye,

Embarking on our adult lives – and yet

Five decades of life, of ups and downs,

Of love and marriage, work and motherhood

And here we are, back in the world of gowns

And college food and essays – and it’s good,

To travel to the past and find you here,

To share just one more evening meal that ends

In someone’s room - before we disappear

Into a future, where I’m sad to know

It’s over. It was over long ago.

On Friday, September 20th, 2013, I travelled by train with my old friend and contemporary, Wendy Cope, from Cambridge to Oxford. We were bound for the Gaudy Dinner, and I had been looking forward to this day for many months. I had filled in the place on the form where it asked us who we'd like to have on the same corridor, as it were, and I just listed all my friends. The result of this was: we were all next to one another which made things very pleasant and facilitated the drinking of cups of tea, gossiping, and generally made all of us feel as though were were quite at home. Anne had the best view and she called us along to look at it. 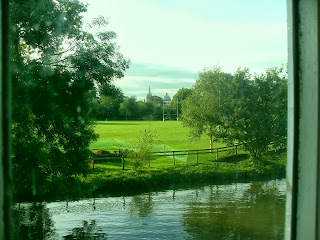 We had tea. We found out what people had been doing for the last 50 years. We remarked on how very little we'd changed in spite of looking completely different in so many ways. We changed into our glad rags and made our way from Milham Ford, where we were quartered, past South to the new Jacqueline du Pre building. 36 of us were there. Someone from the College took a photo and if I ever get hold of a copy of it, I will post it here on this blog. The Principal addressed us. I can remember being quite intimidated by the Principal in 1963 but now it struck me how young and glamorous she was. She told us about life at St Hilda's since the men had arrived. Their tally of Firsts had gone up and everyone seemed happy with the arrangement, but I rejoiced that the college had been single sex when I was there. Am I an old fogey? I suppose I am, but honestly, if there were men around in the early morning before I had my make up on, I'd have been very disconcerted. 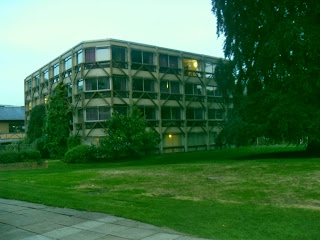 Everyone sat with their old chums. We didn't make an effort to speak or interact with women whom we'd not known when were were young. Was that bad of us? Was it natural? I don't know. What I do know is: it was delightful to catch up with those people we did remember with fondness. Anne, Ann, Wendy, Sian, Liz, another Liz and Esme. We spoke of those friends who were no longer with us, and Wendy made a toast to 'absent friends.' Tamara couldn't be there and neither could Jenny but they'd sent apologies and it's quite possible that now we've all met up again, we might do so informally some other time. 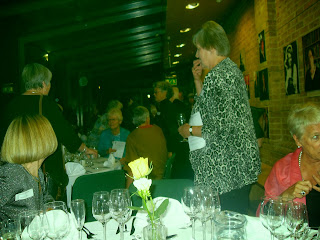 Here's a picture of us during the dinner. It's not a very good shot but if you look carefully you might just see my mugshot staring down from the wall. We were invited to send in a photo on our application form and it was good fun to see everyone displayed like that. After dinner, back we went to Milham Ford. I can honestly say that the only time I was in this building during my time at Oxford was to do Laundry. All the washing machines etc were in there...I lived for all three of my years in a building called Hall, which I always thought of as the main building, but that was perhaps a bit solipsistic! On Saturday morning, I got up early and took a photo of one of the splendid St Hilda's trees 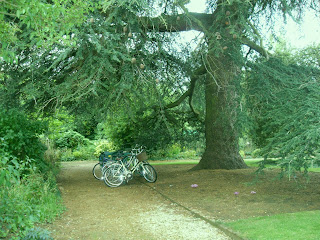 ...and went and stood under the window of the very beautiful room I had in my first year, just so that I could photograph the view I had every morning. 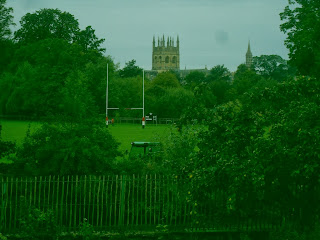 And finally, the gates. I've taken two shots of the gates. The first, to set them in context and to show how high and imposing they were.... 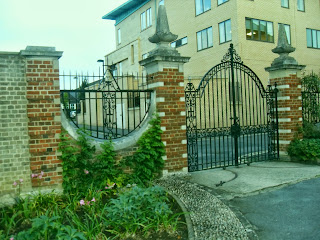 ...and the second to draw attention to those wicked spikes and the general dauntingness of them as things to clamber over in the dark. But I did. I, famous for not being able to climb for toffee, as we used to say; well-known for never having got over a single piece of gym equipment in my entire school career, used to get over these gates. Climb right over them: up one side and down the other. I have no idea at all how I did it. I must have been young. 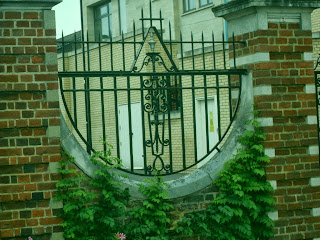 What a wonderful poem, and a lovely post! Thankyou, Wendy and Adele both!

Lovely post, Adèle! I too did some quite - in retrospect - impressive feats of climbing in (at Newnham - I would have to travel in the opposite direction for such a reunion). And yet could not do anything so gymnastic in, well, Gym.

OW! (Mind you, climbing in the dark must be a bit like skiiing in a blizzard - if you can't see where you're going, you don't start worrying about the danger, and then it's actually quite easy?)

A real Gaudy Night.
Thanks, Adele and Wendy.

Love the thought of you climbing the gates! Proves you're not an old fogey. Please, please do post the photo of your Gaudy Night.

What a lovely post, and for so many reasons!

Thanks for sharing a happy tale of now - and a more acrobatic past, Adele. Those spikes look as if they'd be even scarier after a few glasses of wine, although any revelling clamberer might not think so at the time. . .