A German tourist died on the Grand Canal in Venice a few weeks ago. In a 'perfect storm' of traffic, the unfortunate man was crushed in a collision between a vaporetto and a gondola. His body was repatriated to Germany for the funeral - which was attended by a cohort of Venetian gondoliers, showing solemn respect.
The story attracted international press attention. Deaths on the water are rare in Venice these days. But once upon a time urban drownings were far more common, and it was often impossible to identify the corpses.
Venice has historically shown tenderness to those who have died in her waters, and even to those whose identities have never been known..
Chapter 5 of my children/'s book Talina in the Tower begins like this:

The Company of Christ and the Good Death


The saddest work of the members of the Company was to retrieve unknown drowned bodies from the water: that’s why its full name was ‘The Company of Christ and the Good Death’.


Venetians were prone to drowning: it was an ancient superstition among them that it was better not to learn to swim.


‘The sea must have what the sea wants,’ they were fond of quoting.


And, every so often, the sea took. When the stones sweated slippery danger, there were always drunken, clumsy – or just plain unlucky – Venetians who slipped and fell into the canals. Some time later, the kind, quiet men of the Company of Christ and the Good Death would pull their corpses out of the water and take them to the cemetery island of San Michele for a decent burial ...

I create a lot of counterfactual history in my books, but la Scuola del Cristo e della Buona Morte really did exist, as did the old Venetian superstition about not learning how to swim.

The Company of Christ and the Good Death was indeed devoted to taking dead bodies out of the water. Sometimes also known as la Confraternita del Santissimo Crocefisso, the association’s foundation in 1635 was marked by the construction of a little chapel with an altar under a portico (now demolished) of the church of San Marcuola, near Venice’s ghetto.

In 1643 began the building of the current edifice in the street now known as the Rio tera del Cristo. It was pronounced, on its completion the following year, to be  "in bellissima forma".

On the façade, in white Istrian stone, an inscription records that from 1640 the Scuola was allied to a similar confraternity in Rome which also "esercitava quella di portarsi a raccogliere i corpi degli annegati non conosciuti per dar loro onorevole sepoltura".

At the entrance, on the Rio Tera drio la Chiesa, to the right is still visible the 'abate’ or large stone that served as an anchor for the standard of the Scuola.

In the Scuola's early days, there was no cemetery at San Michele. This joining of the islands of San Michele and San Cristoro was a Napoleonic invention. Until the early nineteenth century, the Venetian dead were usually buried in campi di morti  near the parish churches. Opposite la Scuola at San Marcuola is a raised piece of land, usually a sign of one those burial grounds. It easy to imagine that quiet corner as a resting place for the drowned bodies of the unknown.
And it would have been so much easier to drown in Venice at that time. Very few of the bridges had the handrails we see now, or the parapets. On rainy, slippery nights, a misstep might lead straight into the water. There were no street lights, of course, unless you count the candles that were lit at the capitelli, little altars that you find all over the street, usually with an image of the Virgin Mary. If you absolutely insisted on nocturnal perambulations, you’d have been well advised to hire a member of the Scuola of the Codega, the lamp men, who would talk in front of you with a lantern and guide you over the rimless bridges.


My collections of Venetian proverbs show a respect for the water and its perils.


If you want to learn how to pray, go to sea


Better to drown in the sea than in a canal

If God had wanted Venetians to be fish, He would have given then an acquarium, not a city.


Where there is no faith, the water pushes in.


But back to the Company of Christ and its home. There is so much to peer at in Venice that I for years I have walked unseeing past the betiful little building. The façade is enriched by windows with intricate iron grates. Tall Corinthian pilasters rise high. The third floor is crowned with a triangular timpano. 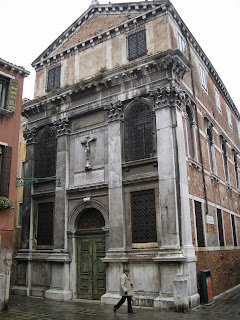 
The congregation of the Scuola, which survived the Napoleon suppression of the monasteries, was still functioning in 1858. Today it is integrated with that of San Marcuola.


And in 1984 it seems that canvases remaining in the disused Scuola were despatched to the Museo Diocesano d’ Arte Sacra in San Marco.


I have never seen the doors to the building open but recently it has been given a healing hand. The roof has been consolidated, the beams reinforced and the large marble crucifix on the façade has been made more secure. The parish priest at San Marcuola, the newspapers tell me, has shown great tenacity and a great attachment to the Scuola, of which he is the guardian, from the moment when he took his role 23 years ago. Federico Niero has been a champion of the fabric of the place all this time. With this link, you can see the architects’ beautiful drawings for the project.
The next step, of course, would be to get its paintings back, and to let the public, and curious writers of historical novels, back inside.

What a fascinating post. I agree that tending to the dead is one of the basic decencies, and writing about the dead is another way of doing this. For my part, I can't see how one can really write about someone without some sort of empathy, and if a life was sad then the writer must understand that sadness for the story to be 'true'. Chekhov, for example, seemed able to be tender about his characters however they behaved.