Carry On Up the Gothic Kyber by Eve Edwards

Terrible dark things happen to British men when they go to India - at least according to the fertile imaginations of the late Victorian short story writers.  While doing some research into the gothic stories of the 1890s - the same decade as Dracula and Dorian Gray - I came across a whole sub genre of what we have to call oriental gothic - and a fabulous little sub group it is too!

I remember reading Edward Said's seminal work, Orientalism, when at college.  He exposed the false assumptions coming from the Western world about the culture of the Middle East and Asia but I don't remember anything quite like these stories.  You have 'The Mark of the Beast' by Kipling - a terrifying tale about what happens to Europeans who disrespect Indian deities.  The offender gets bitten by the Silver Man, a holy leper with no features, and turns into a werewolf-like creature.  In B.M Croker's 'The Dak Bungalow at Dakor', any overnight visitors are haunted to the point of madness by the murdered victim seeking justice.  And in the wonderful 'The Phantom Rickshaw', again by Kipling, a Raj Englishman is tormented to death by the ghost of his former lover, Mrs Wessington. There are many many more, some of which started life as ephemeral pamphlets sold on Indian railway stations to amuse the passengers.  Look out the window and the gothic stared right back.

H.G. Wells did his own sort which happened to be set largely in the distant west - the Pacific and the Amazon, but I am bending my rules here to include him because the setting is equally exotic - distant empire.  You might be familiar already with the chilling 'The Island of Dr Moreau' - a scientist creating were-creatures in the overweening manner of Frankenstein.  You can probably guess that it doesn't end well for him.  Even creepier to my mind is The Empire of Ants, set far up the Amazon.  In best disaster movie fashion, ants get sentient and start to take over.  I'm half convinced that this is entirely plausible!  They may be small but they are mighty - and invade all orifices. 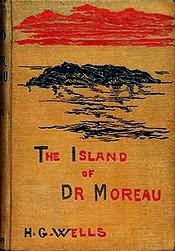 What is particularly interesting to me is that the Kipling and Wells stories make it quite clear that it is the European who has crossed the line and brought the punishment on himself, like Victor Frankenstein playing god and being pursued by his own creation.  Mrs Wessington is a stalker, in life and after death.  The Indian context is rather by the by, a glamorous backdrop to an old tale of sexual betrayal. Fleete falls foul of a country he doesn't understand, having a just punishment meted out to him for his asinine behaviour in the temple. Dr Moreau, a heartless vivisectionist, creates the cruelty that kills him.  This are all rather clever commentaries on the empire project, questioning European supremacy. The gothic genre is doing its familiar job of making us look into the shadows of our selves as well as the external setting of scary huts in forests, claustrophobic islands, alleyways and jungles.
Where has such oriental gothic gone?  I am now thinking that we place out gothic horror in space.  Darth Vader could be seen as a Frankenstein turning into his own creature.  The Borg from Star Trek - if you don't know them take a moment to watch a 1990s episode with Patrick Stewart - for my money one of the scariest monsters of them all.  Even Doctor Who has its moments in this genre.  Anyone got other suggestions?  Warning: once you get going, it is fairly addictive!

Really interesting - though I now have the thought of ants and orifices stuck in my head!

Oh, yes, the Cybermen in Dr Who are scary, because they're human beings who have had dreadful things done to them. At least Borg victims can more or less return to humanity with help.

What about Alien? That was inspired,I believe, by certain parasitic wasps that lay their eggs in other insects.

But we don't have anything quite like those Victorian Gothics, at least nothing I can think of.