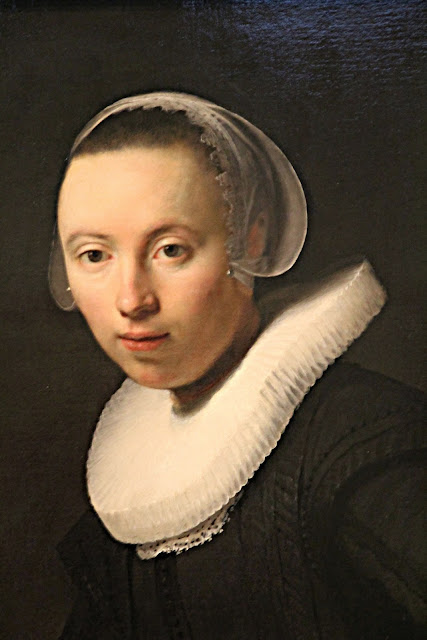 A few weeks ago, I went with my husband to the stunning collection of paintings at the Academy of Fine Arts, Vienna, and we spent five euros on a photography pass. These are some of the photographs I asked him to take - which, incidentally, made us realise what a challenge it is to photograph paintings, especially behind glass!

When I am looking at old paintings nowadays, I like most, to look at faces.This Portrait of a Young Woman drew my attention as soon as I walked into the part of the gallery where she is displayed, with 'Rembrandt,' in my head. She is indeed a painting by Rembrandt, painted in his first year in Amsterdam. There she is, with her stiffly starched ruff and cap, her ear showing beneath it, and her hair scraped back, quiet and modest, no doubt. But there is nothing stylised or archaic about her face. She is a person who you might meet (in different clothes, of course) on the street nowadays, or perhaps walking her dog, a little shy, I think, not very keen to chat to a stranger, which makes it harder for her that she's been exposed to the stares of strangers for years and years. She seems kindly, though, and genuine.

This young woman is probably one of the silent many who lived without leaving any written record of herself, but on the canvas we can still meet her and look into her eyes.

There may be a symbolic agenda in the paintings, but the medium the agenda is expressed through is the human body, the human face, which we can recognise because it is like our own. OK, her thoughts will have been very different from ours. Nevertheless, there was still that physical humanity that has been passed on to us, the inheritors, and which we pass on to our children and grandchildren who will live in such a different world again. 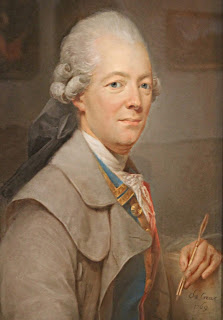 Here is the painter Edmund Weirotter, looking at himself as he makes his self-portrait in 1769, with something in his face that I recognise, because it's part of me - though I work with words, not with paint.

And here is the young Van Dyck, a self-portrait again, which he painted in 1613 to 14 when he was only fifteen. It's incredible that he achieved such artistry at such a young age, but however precocious he was, he's a moody adolescent - it shows in his face. 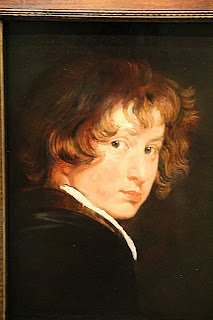 And don't tell me there was no concept of adolescence in those days. For one thing, hormones are not conceptual, and for another, there are plenty of mentions of 'the awkward age' in old novels. Indeed, that is what the painting is about for me; a young lad looking out into life, uncertain, clever, stubborn, probably, all potential. 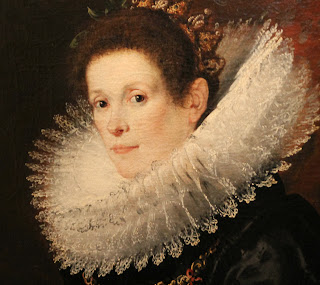 Gaspar de Crayer's Portrait of a Lady (1630) represents an aristocrat, probably from Brussels court circles, and she wears the symbols of privilege; her ruff so much bigger than the one worn by Rembrandt's young girl, the heavy gold jewellery, the coronet - but I wouldn't be surprised to see someone with her face serving me at the post office, the kind of post office counter staff who seem to despise their customers. 'Put that on the scales for me,' she could be crossly saying - though not, of course, dressed like that. Or she might be an example of the not-so-nice doctor's receptionist. But this lady's face, of course, is using those muscles to express her disdain for the hoi polloi - those of us, for example, who troop through the gallery gawping at her.The poor thing can never get away from us, now.
Then there is this family, painted by Pieter de Hooch in Delft, in 1658. 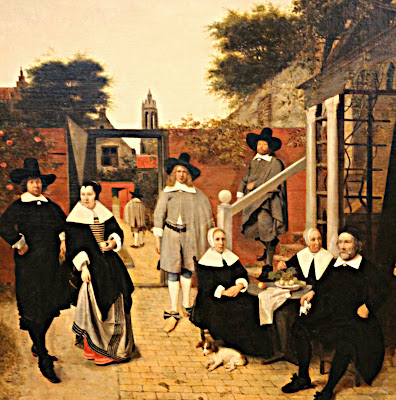 I do like the little dog in this painting, lying there, probably hoping that some scraps will fall from the table so she or he may eat it.  But there again, the faces are fascinating, and you can read their silent story - people like us, just a few centuries earlier, getting themselves painted in their courtyard, with their fine climbing rose. I love the lady's red petticoat - incidentally, red was not considered a flamboyant colour in those days, as my daughter found when she did a dissertation on Quaker dress in history. The petticoat was doubtless decorous and plain, suitable for a wealthy but sensible bourgeois lady.


This is the face that interests me most among these, though; this woman looks to me like one of the older members of our Quaker meeting. It's a well-worn face, unassuming, no-nonsense, but thoughtful and intelligent. 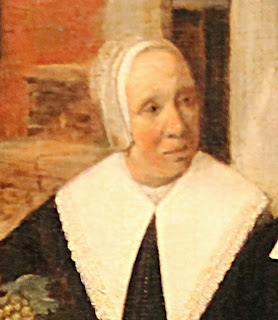 And here is a sixteenth-century gentleman,on a side panel of a triptych Lamentation of Christ, painted by an unknown painter, though the central painting in the tryptich was by the Master of the von Groote Adoration. 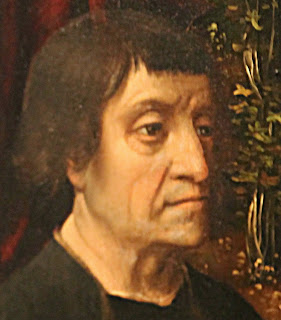 Usually, though, the figures in these paintings are members of the family that commissioned the work, and probably that is what this man was. Who knows? But we are familiar with the way his cheeks fall, the way his lips are pressed together, the weariness of the bags under his eyes. We see them all the time on our fellow human beings, or in our own faces when we look into the mirror.


My last featured painting (as they say) is a Murillo,painted some time between 1670 and 1675, and I am pretty sure there is something similar in the National Gallery. It shows two lads lying on the ground and playing at dice. 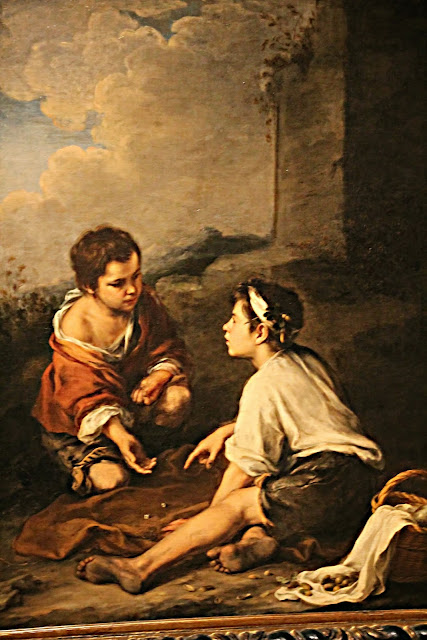 There may be a moral in this painting; the boys are in rags, and dicing is a dangerous, thriftless vice - but Murillo himself did voluntary work with street children through the confraternity of the Caridad in Seville. These are just boys, with dirty feet, which they no doubt would hate to have washed if they had mothers to insist on it. I particularly like the one on the right, the argumentative look in his whole posture, which looks so like my grandson saying: 'I know that!' It is just essence of boy - Just William, even? 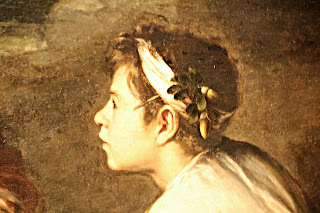 The past may be another country, where they did things differently, and yet we are linked to those people of a former age through in muscle and nerve and sinew, skin and bone, and the DNA they have passed on to their descendants. When I look at them on canvas, the human beings who came before us seem no longer lost, decayed, or strangers, but our family, human beings just like us. That may seem obvious, but like many obvious things, is a cause of wonder that takes me beyond words.

All photographs by David Wilson.

What a lovely post, Leslie - thankyou for the chance to contemplate these faces with you.

So glad you posted this, Leslie. I'm just back from Vienna. Their Galleries and Museums are truly stunning. Your blog brought back happy memories.

I love this post. I am an artist and find great affinity with faces. It's something we all share and something so universal that immediately connects us to past and future.

Excellent post. And a good point, too. People don't change over the years. I know that old Puritan lady. I see her every week at my 'senior citizens' exercise class. And that haughty aristocrat works in my local HSBC and handles my cheques as if they're smothered in germs.

Thanks for sharing these - and good photographing!

Thank you, Leslie, and you're right - there is a Murillo in the National Gallery, of a cheeky boy leaning on a window sill.

This one at the Norton Simon Museum in Pasadena, where I live, stopped me in my tracks:
http://www.nortonsimon.org/highlights-of-the-collection-the-power-of-portraiture/
I stared at the man for a long time and felt he was staring back at me. Should I ever have my portrait painted, I'll imagine myself looking into the future.

I have the feeling that the Baron had a lot of success with ladies, somehow..

Maybe that's why I stopped. And he knew he had me hooked!