Lost Stories in the Land by Imogen Robertson 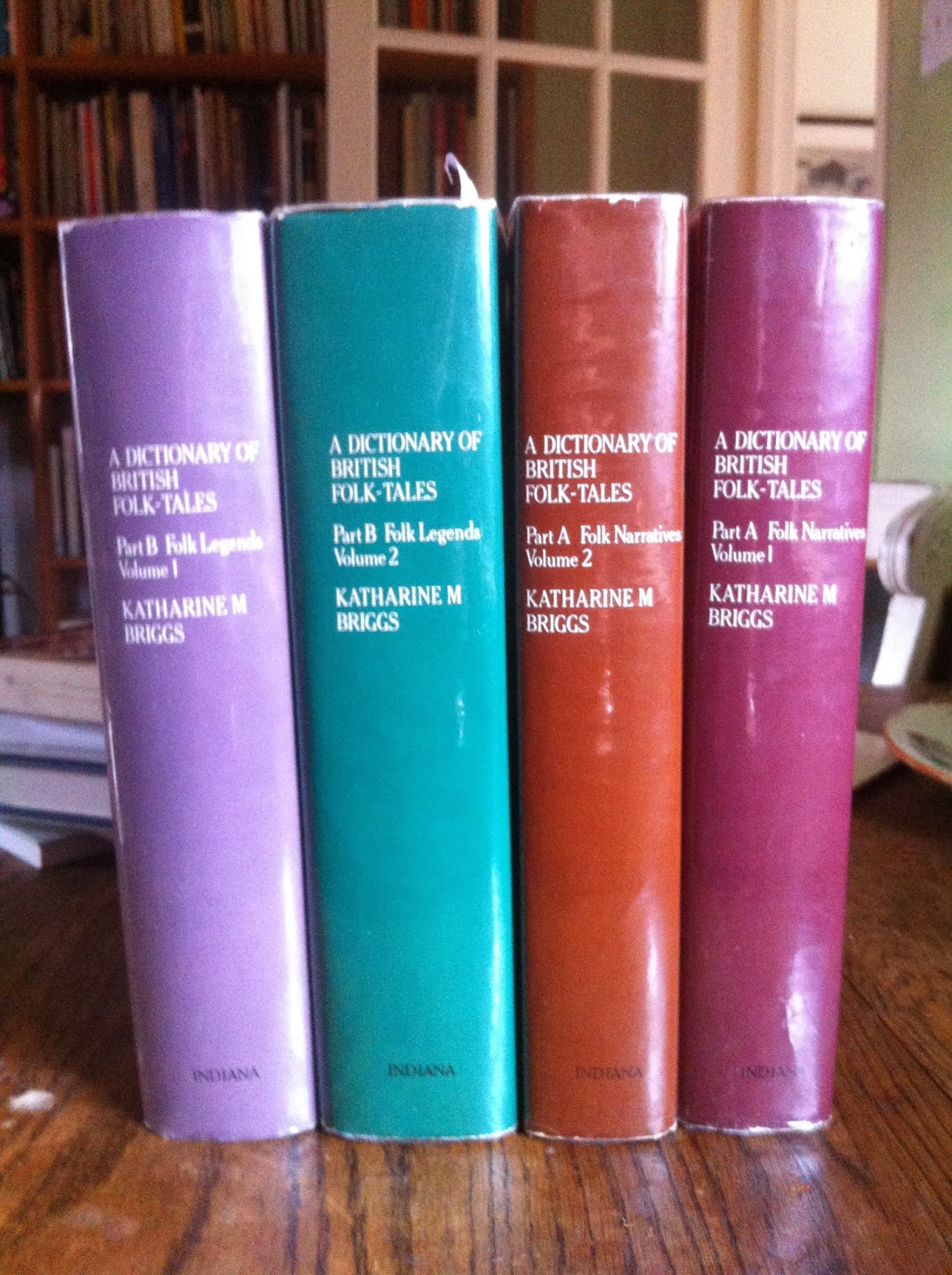 My mother rang me just before Christmas and offered to buy me an ipad. She is a very nice person, and had probably noticed that I kept nicking hers whenever my husband and I go to visit in Darlington.
I can’t help it. It’s shiny and you can find pictures of amusing cats with it. I put the phone down and told Ned I was going to get a shiny, funny kittens machine all of my very own and he made a face. I don’t think he has anything against cats, but he did point out that I didn’t really need an ipad because I’m rarely more than three feet away from an internet enabled device in our flat. Wasn’t there something else I could buy instead? Hadn’t I been going on about a book I wanted, but felt guilty about the price?

He was right. A few months ago we were in Bath and I spotted in a second hand book-shop in the centre of the city the four volume Dictionary of British Folklore complied by Katherine M Briggs. I cashed Mum’s cheque and caught the train to be reunited with it. I did check with Mum first, by the way.

For those who don’t know her, Katherine M. Briggs (1898-1980) devoted her life to writing on folklore. I became a devotee of her work when I read The Fairies in Tradition and Literature last year. The book is a brilliant corrective to anyone who thinks of fairies as sweet, child-like inhabitants of the English Country Garden. Fairies, known by many names and existing in various forms, are dangerous, ambiguous creatures. They are beings of the liminal world; of bridges and ruins, barrows and circles. They might deal honourably with humans who treat with with respect, but they are best avoided. They blind, cheat, steal and punish. Sometimes they are associated with the dead, sometimes not. But seriously, do not go looking for these guys. No good will come of it. Having read that book the world looked more interesting to me. More mysterious, more complex.

There are plenty of Fairies in the Dictionary of British Folklore. There are also witches, saints, ghosts, black dogs, demons, lost treasures, lost leaders, warriors and giants. Reading through the stories, each one with its sources and motifs noted, Britain becomes a magical country where every hill, crossroads, forest and pathway has its own history. So my husband was right. Better than amusing cats. I’ve also developed a bit of a thing for a series of books called Highways and Byways of x (where x = eg, East Anglia, Somerset, Surrey), and Auther Mee’s county books, both are stuffed with local legends and anecdote. I want them all.

I am a fan of human invention and I’m delighted to live in the world of the internet, the mobile phone, antibiotics and modern dentistry, but reading through Brigg’s work, I can’t help thinking about what we have lost too. We are still all telling stories to each other in novels, on TV, in newspapers, on social media, but while we are sharing those stories over great distances, are we at the same time loosing our local legends and tales? We are loosing our local dialects, so perhaps it is inevitable that we are also loosing the local stories that were told in those dialects. That’s tragic and serious. It must loosen our connections to the landscape if we no longer remember the tales of which giant created which hills, how the crags were named, and which King fell in the river and which local saint pulled him out. I’m glad we now all have the advantage of knowing what Benedict Cumberbatch had for breakfast, I'm just saying perhaps there is something more. Of course these folkloric local histories were changeable over time, a nest of unreliable narratives and narrators, but they still tied each generation into their particular landscapes. We were made by them, and made them.

So I have a proposal because, as usual, I would like the best of both worlds. There must be one of the 1% out there who would like to construct a map / database of Britain’s folklore. Just think what a resource that would be. Brilliant for schools, students, tourists but mostly I mean it would be brilliant for me. Next time I’m out walking in the countryside, after tweeting about the weather, taking a picture of my pub lunch to post on facebook, and - who knows - maybe just looking about at stuff, I’d like to tell Siri or Google Glass to share with me the stories of the landscape I am in. A straight narration at first, then lots of nested footnotes on sources, themes and alternate versions for when I feel geeky. Most of all though, I want my technology to replace what is lost, to be my virtual grandmother telling the stories of my home ground by the fireside or while walking the old ways. I want to know about the dancers turned to stone there, and the route the phantom carriage of the impious landowner takes across the heath, and yes, where I should be careful to avoid meeting the fairies at dusk.

Imogen's latest book is The Paris Winter and has nothing to do with British folklore.

A doctoral thesis for someone?

Ooh! Ooh! You found something by Katherine M Briggs? You were right to grab it in hardcover, because I have yet to find it as an ebook, and I suspect the one you mention is well out of print.

But if you'd bought that iPad, you could take photos of those landscapes and tweet them or Facebook them and ask people with the information to help you immediately. And you could compile your database that way. I would certify love to see the finished product online. :)

I see a great project in our future, Sue and Cat. I rather fancy doing a PhD. Sue, the one I have is out of print, but the Folio Society have produced an illustrated 6 volume version... http://www.foliosociety.com/book/FLK/folk-tales-of-britain-legends

I was lucky enough to find a double paperback set some time ago - probably before I realised the importance of the work - and they sit proudly on my special books shelf. Late last year, in my local Oxfam shop, I found a fat book called "The Lore of the Land: A Guide to England's Legends" by Westwood and Simpson, which is about a county by county list of legends and their places, new enough (pub 2005) to request from the library perhaps?

But I do like your idea of a "Lore & Legends" app - although so much depends on how the tales are told. I admit I also feel sad (and sometimes angry) that American urban settings seem more acceptable in children's & Y/A books than the British landscape that lies behind so many of these traditional stories.

I have Lore of the Land too! Excellent book. Yes, I do think we need to get out into the countryside mor - imaginatively and physically!

Oh, please! Yes, I'll play... Sounds like such an amazing idea.... We could even - and I hestitate to suggest this - be done on line? It's not as if we'd mind the fact that the NSA and GCHQ were reading every word?

I think it would do NSA and GCHQ a lot of good!
Jim Burge pointed me towards this:

which is someone's attempt to do the same thing for Guernsey and is a definite step in the right direction...

What a great idea. I love the idea of a map. Growing up between Exmoor and Dartmoor, we were immersed in all the local folklore (beasts, pixies etc), and surrounded by stone circles and as you say liminal places. I'm just reading up on Scandi/Norse folklore, and it would be wonderful to have a similar resource for UK folklore.

Radio 3 has been brilliant constructing the musical map of Britain - forgotten composers, amateur choirs, brass bands and the knowledge of the R3 listeners has been awe-inspiring as ever. I wonder whether there isn't some similar peg you could hang this idea on. Radio better than TV - is there some equivalent of country file who would take it up?

I shall check out that musical map, and it's definitely an imp app! Must be wonderful to have gron up really knowing about this stuff.

I just succumbed to a good deal on the two volume Part B set. You did even better than I did with all four. They had this set at the university that I attended and I wanted it fiercely. However, I can't remember now if the print was tiny as I was a "bit" younger then. I hope it is readable size because I couldn't pass it up. I have "The Vanishing People" and "Encyclopedia of Fairies" in paperback, but I am so excited to have found some of these in hardback. Hope you are enjoying your find; it was fun to come across others who love these books!