In 2009 I began researching Jan Van Rymsdyk and his contribution to the medical art of the eighteenth century. Then a controversial allegation that women had been murdered by medical professionals to provide corpses for dissection left me even more intrigued by JVR. His life, as it turned out, held just enough mystery to be fascinating. He had worked for both the great man-midwives of the eighteenth century, William Hunter and William Smellie, still revered as pioneers by modern obstetricians. It was Van Rymsdyk who had illustrated, almost entirely, their two defining works: Smellie’s A sett of anatomical tables, with explanations, and an abridgement, of the practice of midwifery of 1754, and William Hunter’s Anatomy of the Human Gravid Uterus, Exhibited in Figures twenty years later. These books are still regarded as the moment modern obstetrics was born, through the labours of two supremely talented doctors. But Van Rymsdyk’s contribution has been largely ignored. 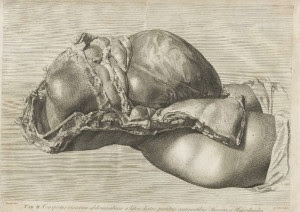 He was not only an artist, but at times, a drunkard, a comedian, and a deeply thwarted man. His life’s ambition was to be a portrait painter, yet his life’s work was a series of dead women and their children. The women’s faces are never depicted, but every detail of their children is captured and there is a curious dignity, almost an adoration in his renderings: the sitting posture of the gravid woman, with her knees covered by a blanket but her internal organs displayed by the neat flaying of the anatomist, the baby curled snugly inside her, a stray wisp of its hair escaping the womb. These images and their origin became a touchstone as I wrote Georgian London: Into the Streets. Whenever the past eluded me I returned to Jan Van Rymsdyk, the conflicted artist who brought his precise hand to those Soho dissecting rooms. 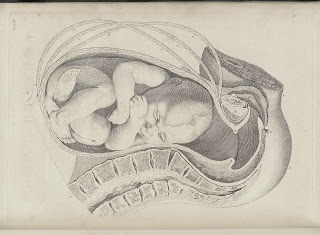 The more I read about Van Rymsdyk, Smellie and Hunter, the more interesting it became. It wasn’t just a story which made medical history, it was a scientific collaboration formed around the pivot of an artist. Both doctors were desperate to leave a legacy. Smellie wanted his advances in the use of forceps to continue helping women after his death. Hunter wanted his scientific discoveries on why women miscarried, presented still births and died in childbirth to ensure his fame. They both needed Van Rymsdyk. He worked fast, with pinpoint accuracy, recording the fresh corpses in a only a few hours. And his images had a strange allure, for all their gruesome reality; in them he managed to combine the Enlightenment ideal of beauty and truth. As Hunter said, the magic of Jan Van Rymsdyk is that he ‘represents what was actually seen, it carries the mark of truth, and becomes almost as infallible as the object itself’. 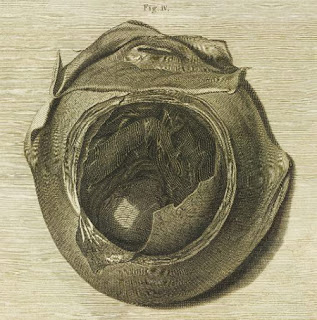 So, I am delighted to be collaborating with the Dittrick Museum in Cleveland, Ohio, on a temporary exhibition of their Jan Van Rymsdyk collection this month. Dr Brandy Schillace and Dr Jim Edmonson are putting together a wonderful show based on Jan as both artist and a man working under some of the most challenging working conditions imaginable.
Posted by Unknown at 08:00

These images are so beautifully drawn and so moving - thank you for posting.

Very moving, yes, and sad, too - and yet how many of us owe our safe births, both those that brought us into the world and those that delivered our own babies - to such work? Thank you!

He was a brilliant artist. Wish I could visit the exhibition!

I can't say sufficient at how successful, uploading and unloding beneficial and respectful the man. packers and movers BhopalHe created the shift my all house stuff safely and in prompt time. I will highly recommend and have an excellent "can do" mind-set and proved beneficial really difficult. Packersmoversindia.org definitely suggest and use again! So satisfied!