BLASTS FROM THE PAST by Adèle Geras

There was a time, O Best Beloved, when things were not as they are today. Many of the older History Girls and many of our older readers will have a dim memory of the days when the Guardian was a broadsheet newspaper. Back then, there was a whole page of book reviews in the paper four times a year. Just imagine it: a full broadsheet page! Four such pages per year. In charge of all this in the halcyon days of the late 60s and early 70s and into the 80s was Stephanie Nettell. Anyone who was around in the Children's Books world in those days knows Stephanie. The broadsheet changed to a Berliner format; Stephanie retired to a beautiful farmhouse in Norfolk and has since those days been a tireless supporter of all things literary, both through her work as an editor and with schools and also by being involved for many years with the King's Lynn Literary Festival. 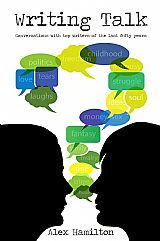 Stephanie's husband is Alex Hamilton. Above is a picture of the cover of his latest book, which I'm going to review here. It may seem odd to be reviewing such a volume, which has nothing overtly historical about it. I justify this by saying: the kind of journalism that is collected here is a thing of the past, for the most part. The Paris Review keeps up a formidable roster of far-ranging long interviews with writers, but apart from the odd article in the Sunday papers, and those mostly for writers who are already well-known, the kind of interviews Alex has given us here are few and far between. His name may be less familiar to some readers but for many years he was well known for compiling, for the Bookseller and the Guardian the famous BEST SELLING HUNDRED BOOKS list. This, however, was only the tip of a huge literary iceberg. He was born in Brazil and came to the UK as a child. As an adult, he's written novels, short stories and all manner of other things, but he's best known as a journalist. Below is a photo of him. 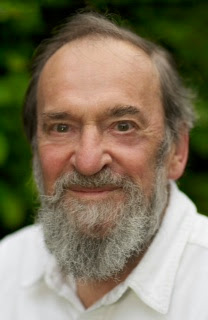 There are several good reasons for reviewing this book. The first and most important is: it's a book that deserves much wider recognition than it received when it came out. It comes from the Matador imprint of the Troubadour Press which is a small press and I fear many literary editors wrote it off immediately for that reason alone. Then there's the subject matter. It's all appeared before, in the pages of the Guardian or the Times, mostly. For the young, whose horizons are bounded by the latest prizewinners and hyped up first novels, a collection in which you might rub shoulders with Erskine Caldwell (who he? the 20 year old might ask...) Edmund Crispin, Charles Addams, etc will not be all that enticing. True, there are the Golden Oldies like Graham Greene and Rebecca West but surely this book will only be of interest to students of literature and not to the general public? Nothing could be further from the truth. These are proper interviews which cover a whole lot of gossipy and fascinating personal ground for each writer. Hamilton is very good at being self-effacing but we never forget we're overhearing a conversation, and it's always a pleasure to eavesdrop when two good talkers are doing the talking.

My second reason for loving this book is because, unlike so much of the rest of the lit.crit world, it gives equal weight to genre fiction. Science fiction and crime are treated as meriting close scrutiny and the same standards as are applied to more literary efforts. That is a rare thing indeed, as any genre writer will know. The best you can hope for, if you write genre fiction is a round-up where your book will get maybe 100 words of criticism if you're lucky and it's very hard to be deep in 100 words. Full marks, too, for including romance and erotica along with thrillers and SF. Hamilton deserves three cheers for that as they really are the Cinderellas of the literary world.

The third reason to write about this book is very simple. I loved it. It seems to me the ideal bedside book and the perfect present for anyone who likes reading and wants to know more about beloved writers from the past and also from those who've had a long shelf-life, like Joyce Carol Oates and Margaret Atwood. You can read about two or three writers before you turn out the light, but be warned: it's very easy to say: "Oh, I'll just read one more piece and then go to sleep."

The fourth reason is: it's a book where women writers are well-represented. That also doesn't often happen. In short, it's a smashing, satisfyingly fat volume and one you're sure to enjoy if you're at all bookish. My one caveat is: there are no children's writers represented here. Perhaps Alex is waiting for his wife to compile her own collection...that would be fun! Meanwhile, go to your nearest bookseller and order a copy of WRITING TALK. You won't regret it.

This book sounds interesting, and I may even have read some of its contents already, in The Times. It's not that long ago that the Saturday Times had a FULL BROADSHEET SUPPLEMENT EVERY WEEK, several pages long, entirely devoted to books. Edited by the wonderful Erica Wagner. Sadly it, and she, are no longer part of The Times. I

Thank you for drawing attention to this. I shall be ordering it. Wonderful.

Yes, very sad to see how reviewing all over has been cut down...thanks for comments!

Yes, very sad to see how reviewing all over has been cut down...thanks for comments!

Sounds just the sort of book for those idle moments when your brain needs a bit of sustaining, but not too grandly or worthily. Thanks, Adele. Sad to see reviewing as an activity that's now considered part of history.

I think quite a lot of things are passing into history at the moment. But enthusiastic reviewing still happens on sites like Goodreads, etc... more than before, really, since we are all reviewers now!

Thanks for this review, Adele - blogs are another place reviews happen!