A friend of mine - a Renaissance man himself - has made an exotic purchase in Venice: a letter of passage for two zebras. He has kindly allowed me to share its contents.

The letter is addressed to Cavaliere Cerrutti, agent and Consul General for Sardinian Affairs in Egypt and was written in Alexandria on the 23rd June, 1833 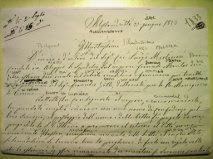 Most Illustrious Lord,
By order of Signor Cavaliere Luigi Molinari, Consul in Aleppo, I am shipping to you, on the French steamer Menton, two zebras (or two desert mules), male and female, to be put at the disposal of Signor Francesco Gatti, for the Royal Menagerie of Turin.

Rather than simply consigning them to the steamer and sending them off, I thought it would be better to send a trusted man of mine to see to their care; the fares of the man and the animals were paid by me; I only ask that Your Illustrious Lordship arranges the return of the aforementioned man, named Hassan, and to acknowledge the receipt of the animals and advise their condition; if these same beasts are doing well, I’d ask you to give him a tip, as I assured him that he would be remunerated by the recipients if they were satisfied. 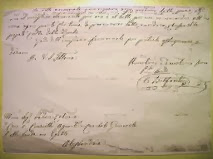 These animals eat barley, vegetables, milk, unsalted bread, but the best food for now is milk, and therefore it is recommended that the man should obtain milk and vegetables in every port where the boat stops.

I rejoice in this opportunity to express my respect and to be able to offer my obsequies and declare myself yours, my most Illustrious Lord.
Your devoted servant
Sardinian Consul
C. Belfonte

So many interesting questions are raised by this letter. Were the zebras ordered particularly? What was the role of Cavaliere Cerrutti in this matter? I could have spent several days researching this matter but in the end decided to concentrate on the destiny of the two zebras rather than the surely far more prosaic lives of their human keepers.

I believe that this letter refers to the 18th century Palazzina di Caccia of Stupinigi, a stupendously grandiose hunting lodge for the Royal Houses of Savoy. Stupinigi is now a suburb of Nichelino, ten kilometers southwest of Turin. A Royal Menagerie of exotic creatures was set up at the Palazzina di Caccia between 1815 and 1826. The collection constituted a kind of living Cabinet of Curiosities – the animals in ornate cages and enclosures being an extension of the rich collections of minerals, shells and antiquities kept under glass in cupboards and display tables. The exotic beasts of the Royal Menagerie were intended as an expression of the monarchy’s wealth, culture and taste.

Unlike the animals displayed in the travelling circuses already common at this time – especially in Turin, it seems – our zebras were destined to be seen only by honoured guests and aristocratic visitors to this favourite palace of the royals. Weddings and great parties were often held there.

The Stupinigi zoo was later turned into a stud farm. Were our zebras still alive then? Were they put to reproductive works?

But it seems that some of the exotic animals from Stupinigi, including perhaps these milk-fed zebras, ended up stuffed in the zoological museum of Turin. The collections of this organisation now appear to have been translated into the Museo Regionale di Scienze Naturali di Torino.

If I am ever in Turin, I shall certainly make a visit in the hope of meeting the two zebras face to face.

An intriguing letter and a wonderful story, both the Known Facts account and the one they start running in the imagination. Thank you for sharing this treasure.

How wonderful, I love this.

Lovely! Is milk really good for adult zebras, though? Perhaps it made them more docile. I have always been fascinated by the image of Lord Rothschild driving zebras, and have just made a brief excursus onto the Web and found loads of pictures of and stories about zebras being used like horses - and even cross-bred with horses and donkeys. Apparently they were favoured in Africa because they were immune to tse-tse fly. They look such cool mounts! I wonder if your pair were ever saddled or harnessed, Michelle?

I've come late to this lovely post Michelle. I've a postcard of two zebras 'inspanned' to draw a cart. Not your two I'm sure.

Interestingly in 1825 the Pasha of Egypt sent a giraffe to Charles X of France... the first ever giraffe seen in France and she walked from Marseille to Paris accompanied by 3 cows who supplied her with 25 litres of milk a day. And two sheep as well... maybe they were milked too to add variety, I'm not sure. She's the subject of my new picture book – Zeraffa Giraffa coming out in April and illustrated by Jane Ray.

What a find to have seen that letter!