© National Portrait Gallery, London
Elizabeth, Queen of Bohemia
by Unknown artist
oil on panel, 1613
30 7/8 in. x 24 1/2 in. (784 mm x 622 mm)
Purchased, 1982
Primary Collection
NPG 5529
What a painting – the sumptuous brocaded silk, the diamonds, the pearls big as doves’ eggs, (how many divers drowned gathering these?) the stiffened collar, (how many maids dismissed for spoiling the lace with too hot a tong?) the elaborate hairstyle, the nipped in waistline, the hint of a farthingale, the strands of pearl necklaces (perhaps the ones inherited from her aunt, Elizabeth I?) the face suggesting a certain expectancy, the hunt of a smile curving the lips, serious eyes, the long aristocratic nose with its slightly heavy bridge that is noticeable in all her portraits, said to have been inherited from her mother, Anne of Denmark – as the Stuarts had rather pudgy noses.

When I look at Elizabeth Stuart in this painting of 1613 (for those of you who like a timeline painted just 41 years before Fabritius’s painting in Donna Tartt’s The Goldfinch,) I sense it’s a face one no longer sees in the 21st century. Yet I searched through my own photo files and came across this 21st century girl in 15th century dress celebrating a pageant in Italy, who might have been her sister. The same mouth, the same nose, the same eyes and this changes Elizabeth Stuart into real flesh and blood for me. 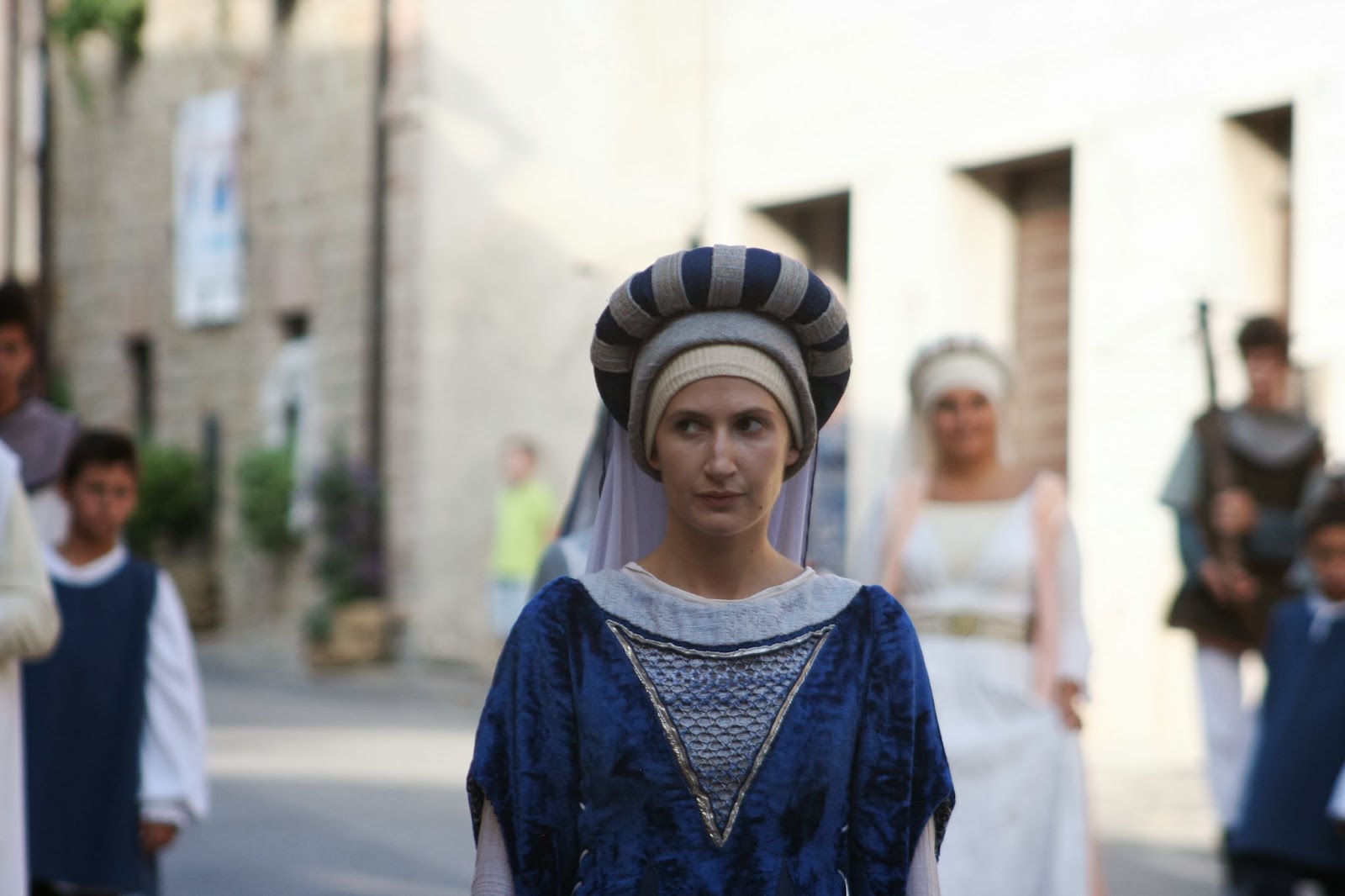 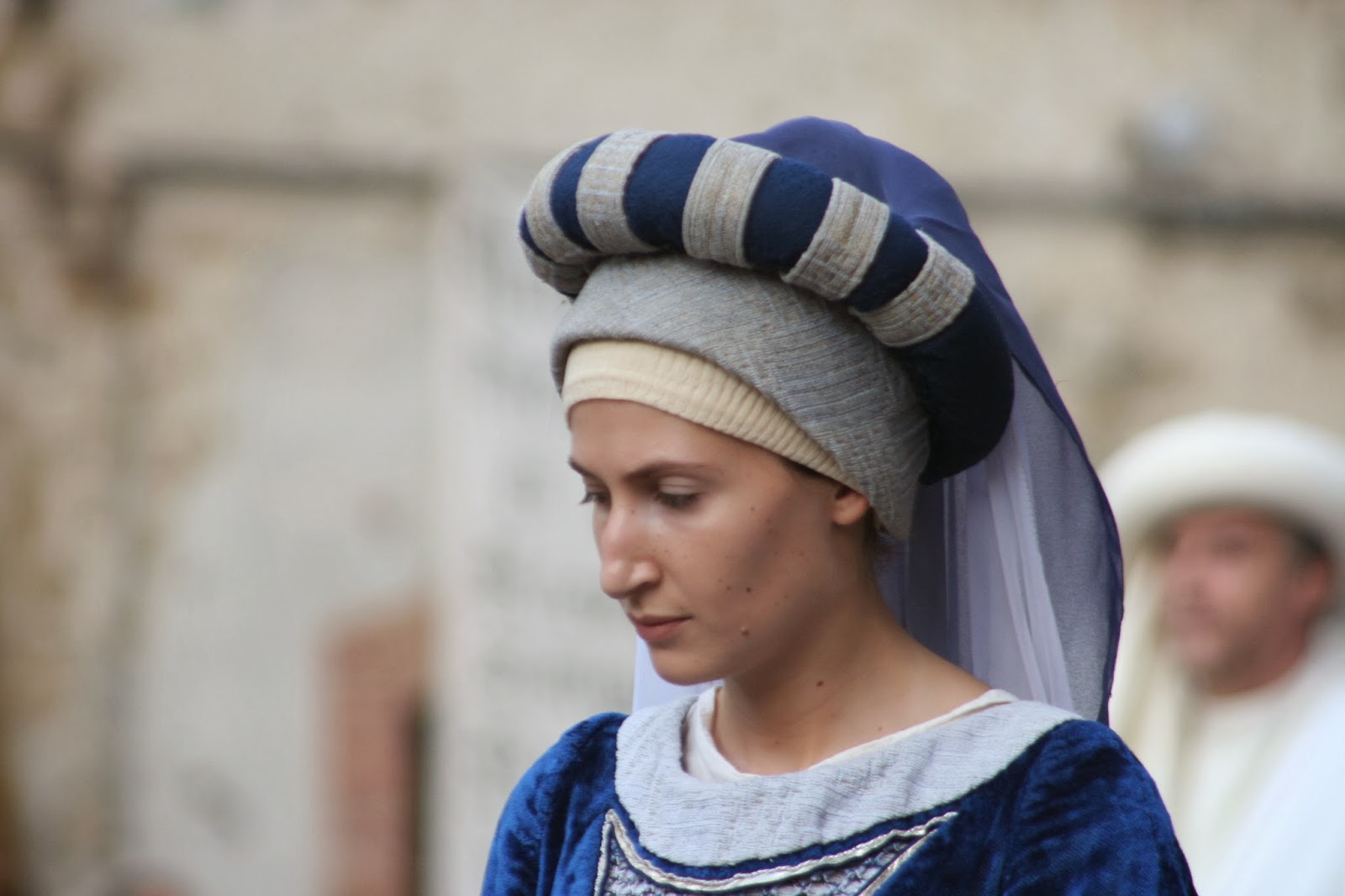 The portrait of Elizabeth is particularly poignant as it was painted when, within the space of a few weeks she’d lost her adored older brother, Prince Henry, heir to the throne of England, and she’d married Frederick, Elector Palatine of the Rhine, a boy she was hopelessly in love with. Not quite Four Weddings and a Funeral but still a time of huge emotion for a sixteen year old – a beloved brother dead of typhoid, a new husband and a voyage to Europe which would take her away from England forever.

But Elizabeth was used to matters of life and death. She was nine years old when a group of Catholic radicals plotted to blow up the Houses of Parliament to kill her father James I and her brother Prince Henry, and then planned to abduct her and put her on the throne as a Catholic queen. Fortunately their plans were foiled. In the portrait she is dressed with all the grandeur of a young woman who could well have become queen of England, albeit a Protestant one, if her sickly younger brother Charles, who limped from childhood rickets, stammered and was acutely shy, hadn’t lived to become King Charles I.

When I made enquiries about portrait NPG 5529 at the National Portrait Gallery, Catharine MacLeod  Curator of Seventeenth-Century Portraits had this to say:
“The jewels that appear black in the painting, notably in her hair and in the large setting on her chest are most likely to be diamonds, which are conventionally shown as black in portraits of this period (partly because they were set in such a way that light did not pass through them as it usually does in the kinds of claw settings most commonly used today). The black oval on her shoulder appears to be a black enamelled locket, probably containing a portrait miniature; the black setting suggests that this might be a miniature of the recently deceased Prince Henry. “

I suggested that the white feather in her hair might have been a tribute to him as the Prince of Wales, but it appears not. She wears an armband of mourning and her standing collar and the lace around her neck have the lion and the unicorn, as well as fleur-de-lys and the royal coat of arms, all of which allude to her British (both Scottish and English) royal status.

My story, The Phoenix, for the anthology, Daughters in Time about to be published by Templar, draws on the poem written by John Donne to celebrate the marriage of Elizabeth to Frederick. Donne’s line: ‘Up then fair phoenix bride, frustrate the sun,’ suggests her spirit.

For me this spirit is epitomised in a much earlier miniature of Elizabeth. painted by Nicolas Hilliard. I like to think of it as the one she might have sent to her suitor Frederick in Heidelberg via the English ambassador. I can’t prove this but why be a writer if we can’t imagine. 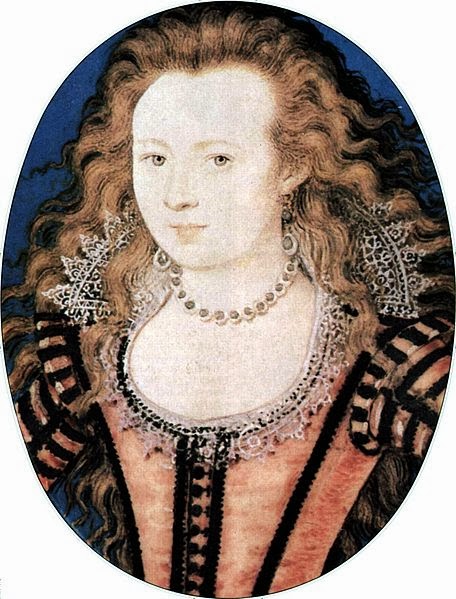 The portrait shows her looking directly into the eyes of the beholder wearing a simple velvet carnation­-coloured dress, her hair hanging loose and wild… as if to say: this is me… this is what you’ll get.

One can believe that this is the true Elizabeth. Feisty and strong-willed. The girl who persuaded her father to choose not a wealthy old grump from a list of ten possible suitors but the young man she herself had fallen in love with. The girl who dressed as a boy in order to gain entrance into her brother’s forbidden sickroom. The sixteen year old who married – despite court protocol for elaborate hairstyles – with her hair wild and untamed down her back plaited with tiny jewels and pearls and walked up the aisle at Whitehall smiling into the arms of her beloved sixteen year old Frederick to become eventually the Queen of Bohemia.

Read the story of Elizabeth Stuart in:
DAUGHTERS OF TIME

By The History Girls Edited by Mary Hoffman
£7.99 Paperback, 9 + years 978-1-84877-169-7 March 2014
Written by some of today’s most exceptional female children’s authors, Daughters of Time is an anthology that shines a new spotlight on extraordinary women in history.

‘“History is about chaps" is still all too true a saying. So it's up to the fabulous History Girls to balance this approach with stories of impressive and inspiring women and girls - we were spoilt for choice.’ - Mary Hoffman

History tells us that there have always been brave, challenging and inspirational women, but unfortunately their stories are often overlooked. Publishing in March 2014, Daughters of Time brings back to life the tales of these remarkable women, helping to inform young people of how women and girls have been important in shaping the world we live in today. Written by a collection of established and bestselling children’s authors who all blog with The History Girls.

Lovely post and portraits, and I am now longing to read your Elizabeth story in the anthology! So often the royal sisters get forgotten.

Such a fabulous post, Dianne! I am going to tweet it and look forward to reading the story!

I love the second portrait in particular, and your description of her at her wedding.