The History of the Future - by Eve Edwards

Over Christmas I chanced upon the original Starwars films (parts now called IV and V) being shown on TV.  These were the cult films of my school days - I collected the bubblegum cards and played games based on the world in the playground.

'These are classics, so much better than the new ones,' I announced confidently to my fifteen year old son so we sat down to watch.

Yes, they are much better than the more recent clutch of three, saved by a knowing humour missing from the solemnities of parts I-III, but I had forgotten just how stilted the love dialogue was in them - or maybe I didn't notice.  Add to that, I now see how much they reflect their era of late 70s, early 80s - they are a little history of what we thought the future would look like (though technically Lucas claims them for long long ago in a distant galaxy...).  Good (American) guys fighting an evil empire - the men's hair - the futuristic white Leia costume that somehow look like a Biba trouser suit - the 70s is everywhere - I'm sure you know what I mean.  Even the sexual politics is very much of its time - Leia a kind of Germaine Greer fighting for her rights among the masculine warriors while the Hollywood male (Harrison Ford) manages to quell her with a kiss.  I missed this as a kid but now wish Leia had kneed him in the place where he did most of his thinking.

That set me thinking how futuristic films and novels are so often the best way of accessing the preoccupations of the present.  To change my metaphor, they are a boiled down stock of all most intense flavours swirling around in society.  One of the first futuristic novels I can think of is Mary Shelley's The Last Man (1826). 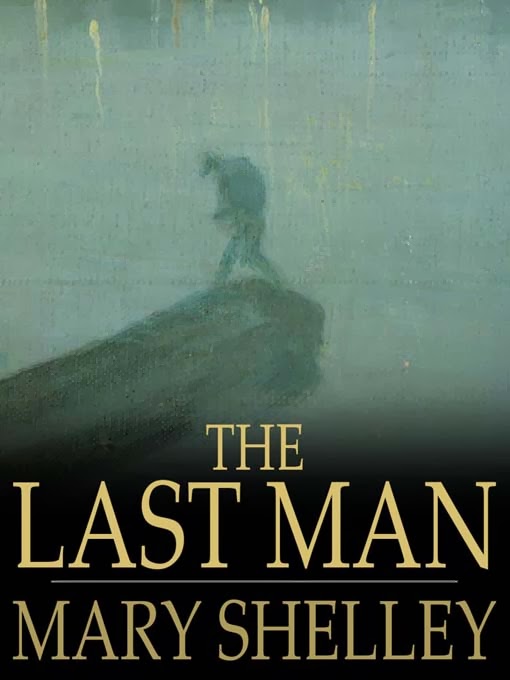 This is probably her most interesting novel after Frankenstein.  The scenario is a dystopian one of debates about monarchy and republicanism all swept away by a terrible plague that wipes out all but the lead character - The Last Man.  You don't have to think for very long to see how this reflects her era of the failing romantic spirit, the fears of everything being cancelled by death.  So many of her own generation were dead by then; on the larger political stage, France had gone from beacon of revolutionary ideas back to creaky old monarchy.  The mid 1820s had seen a banking crisis (sounds familiar?) and Mary Shelley was living a marginal existence trying to raise her son.  No wonder all the best days seemed in the past.  (The  human world ends in 2100 by the way; from the increasing alarming pace of climate change, maybe she knew something when she picked that date? Or is that just my 'spirit of the age' showing?)

Next major work I thought of was The Time Machine by H G Wells (1895).  Much better know, you are probably aware that this captures the ripples of the Darwinian evolutionary debate with a society that has divided in to useless, pretty Eloi and underground predators, Morlocks.  There are also fascinating reflections influenced by the Marxist debate of where class and society is going.


And then there is Zamyatin's We (written 1921) - one of the best reflections in the Russian revolution even though it is sci-fi. And George Orwell's 1984 (1949) - we haven't come to the end of the lessons that teaches us, have we?  The examples are popping up everywhere now I am looking for them.

So that leads me to the rather pleasing conclusion that to understand the past we need to be familiar with the future.  I'd love to hear you thoughts as this is a huge topic and I'm sure you'll have your own gems to share.
Posted by Julia at 06:00

Just to say, this IA a huge topic and a brilliant introduction to it. I offer "Blade Runner" onto the mix for consideration...and a particularly potent scene from it: http://youtu.be/ZTzA_xesrL8 (You Tube clip)

Interesting post and I really must re-view Star Wars. I have the original theatrical releases, which I prefer to the updated versions. Really, it was more about Luke's journey than anything else. And Wells was writing more about politics than the future. Compare his work to Jules Verne, who really was writing SF. 1984 was about 1948.

Star Trek was very much a part of its time, the 1960s. And yet, I'd like to think of a future when most people get on and nobody cares where you come from and what your race or religion is.


My memories of Star Trek on TV was that they nicked the characters & storylines from ancient mythology. The Vulcans and The Romulans and an episode called Helenus of Troyus where a Cleopatra look alike fell for Captain Kirk. Goodness knows what future writers will think worth stealing from us!

A very interesting post. I unfortunately don't have the Eagle annual in which the prediction was made that we would be all flying round with helicopter rotors on our backs in 1990 - also visions of the future (think 2001!) tended to be in the 'futuristic' mode of the 60s, shades of YSL's space-age collections. However, another Eagle annual piece - I used to devour my brother's Eagles and didn't ever ask for Girl - predicts the spread of mobile telephony. Which is what I would say, if asked, we had never expected to happen. The Internet, however,has not been imagined. But someone was predicting mobile telephony in 1900, and there is an Andersen's Fairy Tale about the Channel Tunnel, an idea first put up, I believe, by Napoleon. One can imagine what use HE wanted to make of it. So the future imagined by the past, tells us what that past was capable of imagining - sometimes more accurate than we would think!

Ah, 2001! You know, there's an article written by Arthur C Clarke back in the 50s, I think, worth looking up, and Asimov wrote something futuristic about our time in 1964. And sometimes there's someone who gets an idea from the past. Take a look at those Star Trek communicators of the 60s, they look a lot like mobile phones of the flip top variety and the guy who invented them said he got the idea from Star Trek. And they didn't HAVE automatic opening doors in those days - that was done by people hidden behind them. And floppy disks were used in Trek, long before anyone made them in real life.

I'm also someone who thinks the historical genre and science fiction genre come from the same place - to me it is more about being somewhere else and viewing our current world from a distance.

It's a bit like when you go on holiday and all the huge worries you had at home shrink so you can see them in a clearer light... by stepping far enough back or forward in time, you get a perspective on all the bigger things too, so it's no real surprise science fiction writers of the past were able to predict the future to some extent.