Noticing a flurry of unusual early morning activity at my local primary school I realised that it’s about now that children are being registered to begin school in autumn of this year.
I do distinctly recall my father taking me aged four and a half to my first day of school. We went into a huge classroom where a red rocking horse stood in one corner, an abacus on a shelf, and a free-standing blackboard with easel. There were a dozen or so small chairs and tables. I remember feeling very pleased that someone had thought to make chairs the correct size for me to sit on. Our reception teacher was kindly, a plump motherly figure, who took crying children on her knee and read them stories. She kept a mechanical tin bank on her desk in the form of a man in a top hat. The money went to charity. If you had penny to spare you could put in the man’s outstretched hand, whereupon he would raise it up and the money would drop into his hat. I used to beg my mother for a penny so that I could play with the bank.

On leaving the infant class life changed dramatically. Whether it was because class sizes became much larger or due to a different type of teaching ethos but higher up the school a much harsher regime was enforced. I was a meek biddable child - yes, truly, I was (then) - yet managed to incur the wrath of the dragon-teacher, and was punished for what I considered then and still consider now, a minor transgression. 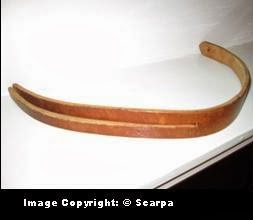 This involved being belted with a length of thick leather strap across the palm of my hand. I invite anyone in favour of corporal punishment to sample a taste of the school belt or tawse (coming from the word used to cure hide) This leather strap, cut into thongs at one end, was also known as a Lochgelly, that being the name of the town in the of Scotland where these vile instruments of torture were manufactured. Each one was stamped (and in case you question this I do hold the evidence) with the name of a Mr John Dick. It was a horrible and unnecessary violence wrought upon young children. 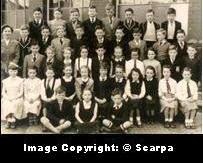 Looking at old school photographs reveals more than the chime of recognition of former classmates. It’s interesting to compare them to ones taken of pupils today. In mine the teacher’s hat and suit could almost be ultra-modern. Uniform is essentially the same, although, I notice that when I was at school, some girls were bold enough to eschew school shirt and tie for a ‘pretty frock’ on school photograph day. To me the most striking difference in school photographs from the past and present day ones is that now the children are actually smiling. Not only do they look happy to be at school they are obviously being allowed to show it.

The great bonus for me was the access to books. We were members of the public library and we had books at home but my school books were a source of enormous pleasure. To this day I still enjoy reading through them. 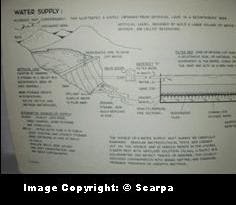 Science books with intricate diagrams fascinated me. Yes, I have deliberately chosen the illustration re water management for this blog post – it may be that certain people should have paid more attention to books like this! 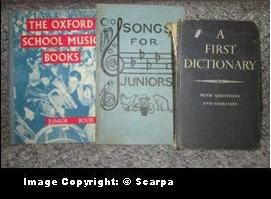 The Music books are unintentionally hilarious. I’d be interested to know if anyone else had to learn Good Morrow Gossip Joan. We were spoiled for choice with those songs in the completely non pc Oxford School Music Book.  Boney was a Warrior  and the quite startling Rosie’s Skirt:

When songs were being selected obviously no one thought ahead as to how a plump schoolgirl named Rosie might feel about hearing this sung loudly in chorus by twenty fellow pupils. 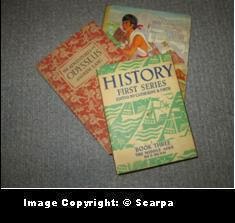 The History books probably did as much to engender my love of stories as fiction books. Combined with liberal amount if Greek and Roman myths I soaked them up, not minding the lists of dates we were required to learn.

The English dictionary … with exercises. I loved my dictionary. The drawings were intricate and it had pictures and quizzes and Fascinating Facts. I owe my championship status at Trivial Pursuit directly to this book.

I’ve a passion for old children’s books but have only just realised that I might have actually stolen some of these school books. I’m hoping the dragon-teacher never finds out!

I was on the receiving end of the strap (Scottish education) for standing on the loo seat in the girls' toilets and shouting over the cubicle to a friend. Trouble was that she was next but one cubicle and another girl was sat on the look in the one between us. I can still remember the gut-clenching terror of being sent to the headmaster...guess I'd be 8 at the time...

It was awful, Elizabeth, wasn't it? Seems like something out of the middle ages now.