Not Five but only Four Postcards by Adèle Geras

Once upon a time, I used to collect period postcards. I have lots of them, in assorted files and boxes in my house. I picked them up at book fairs, and in second hand shops where there were often cardboard boxes full of them. It was fun to look through them and considering them now, I see that my taste ran to Victorian and Edwardian family groups, devoted engaged couples and fat babies sporting waterfalls of lace.

Then, one day, I came across what was obviously a set. I bought all five of them. They struck a real chord with me. Since that time, which must have been in the late 80s, I've thought a lot about why these particular images meant so much to me.  I was, and still am, very interested jn photography and had written a short story called The Poppycrunch Kid about the supernatural power of the camera. [This appears in a book called Letters of Fire, long out of print.] I wrote a poem about the  men I imagined taking these haunting photographs.

Then, the IRA  bombed the centre of Manchester in June, 1996  and suddenly, the subject of ruins was once more in my mind.

That day, the day that  Manchester was bombed, I was in town. I wanted to buy a wedding present and went to Piccadilly on the bus. I found the square unusually full. When I made my way towards Debenham's I was stopped by a policeman.
"You can't cross this line,  Miss. There's been a bomb threat," he said. And as he finished speaking, the bomb went off. It was very loud and very frightening and hideously close to where we were.

The aftermath was amazing. Crowds of silent people lined up in a very orderly manner to board any bus they could...the buses were all pressed into service to evacuate us  from the scene. There were also queues around phone boxes. Remember those?  In 1996 hardly anyone  had a mobile. I certainly didn't.  I went straight home on one of the buses. Four miles away, my husband had heard the explosion.

A few days later, we  went for a walk together through the city. Seeing all the shops, all the pubs, all the places we were used to seeing whole suddenly and shockingly broken, shattered and empty was traumatic, horrible. I can remember standing outside a pub which had a defiant notice chalked on a board outside. You can't kill  Manchester, you bastards! it said, and I was reduced to tears. No one was killed that day. Only the fabric of Manchester: the stones, the glass, the wood lay in pieces and I felt heartbroken.

I remembered these postcards. Here they are. I've copied the English words printed on each card. They are also there in French. Under the title it says: La Guerre, 1914-17 LCHParis 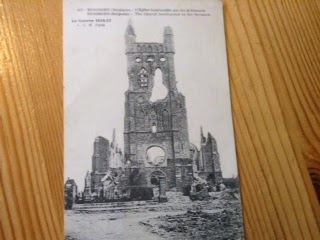 Reninghe Belgium (the church bombarded by the Germans) 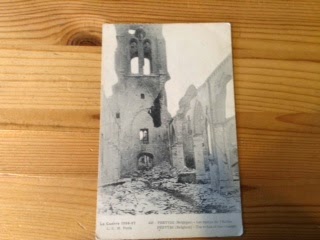 Pervyse (Belgium) The ruins of the church 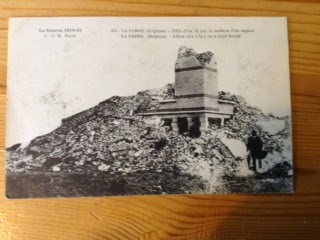 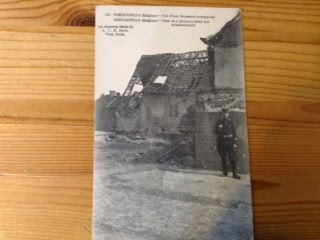 Nieucappelle (Belgium) View of a brewery after the bombardment

There was a fifth postcard. The best of them all and I cannot find it. It may be in another file and it may surface  again one day.  It is of the same soldier who appears in the Nieucapelle Brewery photo but it's a different pose. The only description I have of it is in the poem I wrote shortly after buying all five. It gives, I hope, a good description of what was shown.  I'm sorry I have only words to convey its power.   The poem follows:

L.C.H Paris photographed the War,
sent men to tiptoe over stones cracked open
(but oh, the mud on patent leather shoes
accustomed to sliding
round and round the ladies! The hands
that draped silk gowns alongside cardboard urns
and tucked undying flowers into décolletages
will touch raw air outside the studio.)

With difficulty on uneven ground
they found flat places,
covered their heads with black,
looked for something representative.

Here, a numbered bomb
blew the spy's house
to dust under a dune of bricks.
Only one corner, the last window
as they were.

The brewery roof has gone, leaving
a lattice of timbers.
There's a soldier in this picture,
embarrassed by his own survival.
Behind the camera, under the dark cloth
he imagines the head, a skull's curve.
He's propped his bayonet
against the sandbagged wall
and made his own, much smaller conflagration:
lighting a cigarette,
breathing out the smoke.

This is so moving, Adele. It reminds me of how much we need artists of every kind, to notice things and show them to us in all their horror and glory.

What a poignant, thoughtful post. I too have a collection of old b/w postcards and ponder some of the photographs. The individual images feel so isolated and you're inspired me to discover if poetry will imerge.

Thank you for your comments...I'm glad you liked the photos as much as I did.

Very moving, Adele, and I like your technique of leaving the photos till towards the end of the post. Interesting how that works.

Being so close to a terrorist attack must sensitize you to every attack you read about or see on the screen now.

Very glad you were no closer to it!

I loved the poetry! Especially the soldier 'embarrassed by his own survival.' A very powerful blog, and I too, am glad you were as far away from the IRA bomb as you were.

How amazing to be so close and come away unscathed. Yet are we ever unscathed in such events? Are we ever the same. Clearly not. Your poem was wonderful Adele. Thank you!