The Knight of the Tower - by Katherine Langrish


I was looking for something to write about for today’s blog post, and decided I’d try and find Thomas Tusser’s Book of Good Husbandry, that wonderful Elizabethan farmer’s guide written in pantomime-style couplets: this kind of thing, from memory:

Get home with ye brakes ere summer be gone


For tethered-up cattle to sit down upon.

But I couldn’t find it. If your bookshelves are anything like my bookshelves, you’ll understand why. Instead I spotted Caxton’s translation of ‘The Book of the Knight of the Tower’, published by the Early English Text Society.  Pulled it out, opened it, and came straight across this ridiculously wonderful anecdote – I’ve modernised the vocabulary and spelling a little.  When you’ve read it, you’ll know just why I had to write about this instead. Master Tusser must wait his turn. 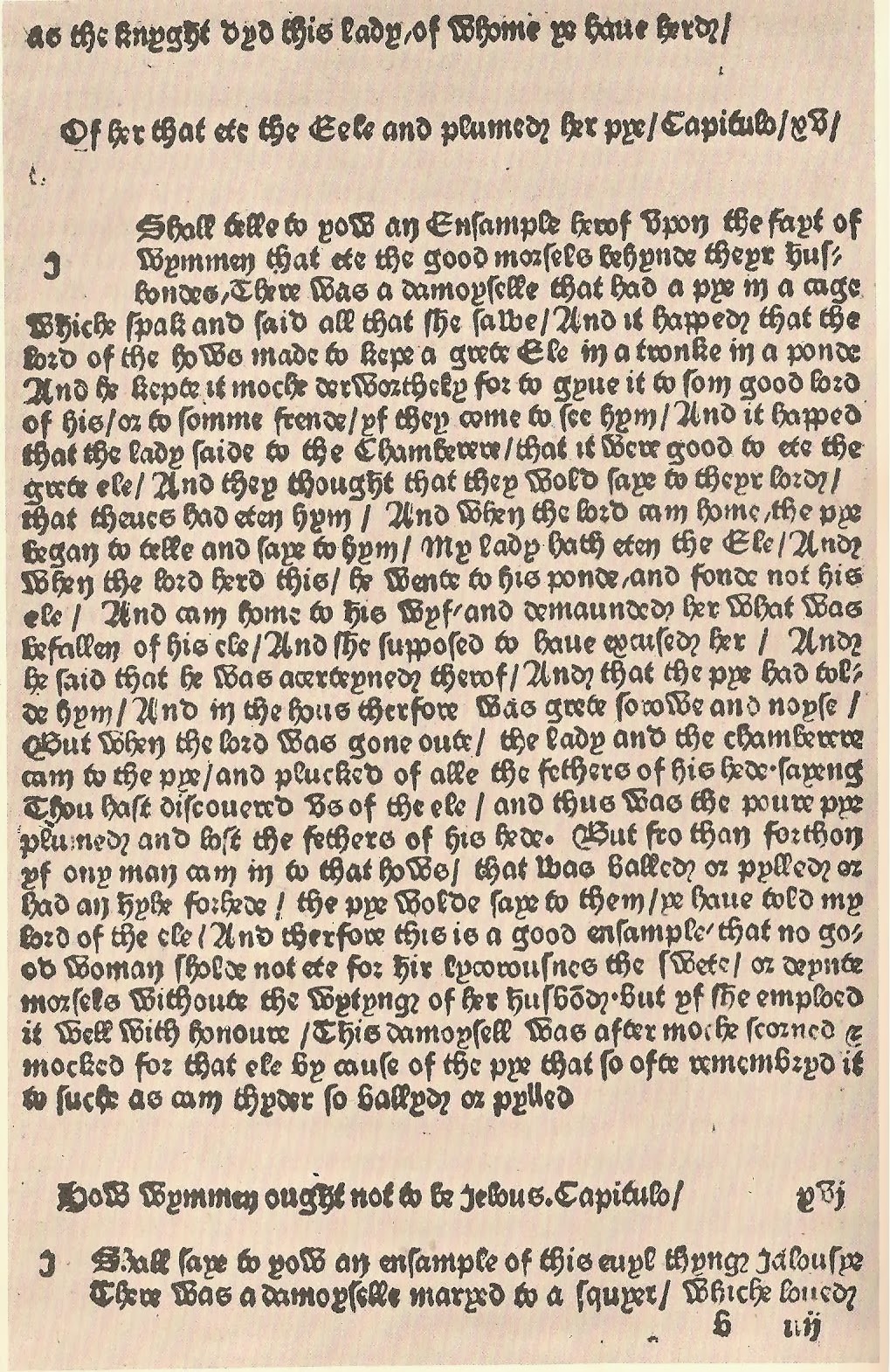 I shall tell to you an example of the fate of women that eat the good morsels behind their husbands’ [backs].  There was a damsel that had a Pye in a cage which spake and said all that she saw.  And it happed [chanced] that the lord of the house made to keep a great Eele in a trunk in a pond. And he kept it much dearworthly [preciously, carefully] for to give it to some good lord of his, or to some friend, if they came to see him. And it happed that the lady said to the Chamberer, that it were good to eat the great Eele, and they thought that they would say to their lord that thieves had eaten him. And when the lord came home, the Pye began to tell and say to him, ‘My lady hath eaten the Eele.’  And when the lord heard this, he went to his pond and found not his Eele, and came home to his wife and demanded her what was befallen of his Eele?  And she attempted to make excuses.  And he said to her that he was certain thereof, and that the Pye had told him.  And in the house therefore was great sorrow and noise.  But when the lord was gone out, the lady and the Chamberer  came to the Pye and plucked off all the feathers of his head, saying ‘Thou hast discovered us of the eele [told on us about the eel]’, and thus was the poor Pye plucked and lost the feathers of his head.  But from then forth on, if any man came into that house that was bald, or shaved [like a monk] or had a high forehead, the Pye would say to them, ‘ye have told my lord of the Eele’.  And therefore this is a good example, that no good woman should eat for licorousness [greed] sweet or dainty morsels without the knowledge of her husband.  This damsel was after much scorned and mocked for that Eele, by cause of the Pye that so oft remembered it to such as came thither bald or shaven.

Fabulous, yes?  That’ll teach her to eat eels behind her husband’s back. I love the broad, almost slapstick comedy: ‘he went to his pond and found not his Eele’… It’s clear that this story was always intended to be a funny one: the difference between Now and Then, however, is that Now we enjoy the comedy but ignore the moral, whilst Then, the comedy was there only to enliven the moral and make it more memorable. The Knight of the Tower really did believe that wives had better not sneak delicacies their husbands never intended them to have. Besides, such deceit might lead to other things. It might lead to this.

The Knight of the Tower was Geoffrey IV de la Tour Landry, and he wrote this long book of advice in 1371-2 for the use and instruction of his daughters.  He was a widower, and doubtless a careful and loving parent, and he worried about his growing daughters’ reputations and morals. He opens the book in traditional medieval style, pensive in a garden, mourning his dead wife in a passage of great tenderness:

And of all good she seemed to me the best and the flower, in whom I so much me delighted: for in that time I made songs, lays, roundels, ballads, virelays and new songs in the most best wise that I could; but death which spareth none hath taken her, for whom I have received many sorrows and heaviness in such wise that I passed my life more than twenty years heavy and sorrowful…

Seeing his daughters coming towards him, ‘young and little…’, he begins to remember the days when he himself was a young man ‘and rode with my fellowship in Poitou’, how his friends (and he?) had made love to young ladies ‘for they had neither dread nor shame… and were well-bespoken … and thus they do nothing but deceive good ladies and damsels’.

Like many a father before and since, The Knight of the Tower Landry decides his daughters have to be protected from such young men. ‘And for this cause… I have thought on my well-beloved daughters whom I see so little, to make [for] them a little book … to the end that they may learn and study and understand the good and evil that is past [ie: that has happened in the past] for to keep them from [that] which is to come.’

You can’t help but like him; and I like him even more when he adds:  “I have made two books, one for my sons and the other for my daughters.”  Sadly, I don’t think the one he wrote for his sons has made it down to us.  I dare say people have commonly been less concerned about the morals and behaviour of their boys: the book of advice for girls, however, became an instant smash hit. The introduction of the EETS edition says: “It was copied many times, and by the end of the 15th century it had become widely known. There are still at least twenty-one manuscripts of the French text in existence; and English translation was made during Henry VI’s reign; Caxton made a new English translation which he printed in 1484, and German version made by Marquart vom Steim, ostensibly for his own two daughters, was published at Basle in 1493”  with woodcuts like the one below, in which a fiend stalks around a young woman who is committing the sin of vanity by dressing her hair and looking in a mirror. 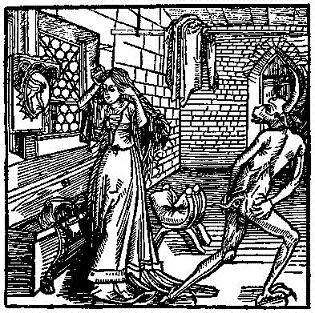 The book continued to be printed right down into the 19th century, and it’s still so lively that you can see why. It must have been a popular read even for the young women who were supposed to be benefiting from it. The chapter on ‘How women ought not to be jealous’ begins with a fight between two ladies in which one of them breaks the other’s nose with a staff. Chapter 15 (xviij) is entitled ‘How a woman sprang upon the table’.  In Chapter 19 (xix), ‘Of the woman that gave the flesh to her hounds’, a lady insists on feeding her two little dogs on ‘daily dysshes of soupes and fryandyses delycyous’ (delycyous is so much more delicious than delicious, don’t you think?) in spite of the warnings of a friar who tells her not to waste food which could be given to the poor.  Naturally she then falls ‘sick unto the death’ and ‘there came upon her bed two little black dogs’ which lick her lips and mouth till they turn it ‘as black as a Cole’!  Shiver!

Yes, there are nine chapters listing the nine follies of Eve (some of which I lifted for evil Brother Thomas to use in my medieval fantasy ‘Dark Angels’). Yes, there are plenty of pious examples taken from the Bible.  But these are constantly enlivened by tabloid stuff such as Chapter 62 (lxij) ‘Of the roper or maker of cordes and kables and of the fat Pryour that was Ryche and a great lechour’. Who wouldn’t want to read it?

Fair daughters, see that you begin no strife to no fool [ie: don’t begin arguments with a fool], nor to them that are hasty and hot. For it is great peril. Wherof I shall show to you an example which I saw happen in a Castle wherein many ladies and damsels dwelt. And there was a damsel, daughter of a right good knight. And she wax angry [lost her temper]in playing at tables [gambling] with a gentleman, which was hot and hasty and most Riotous, and was not right wise.  And the debate was of a dice, which she said was not truly made. And so much it increased that words were enhanced, and that she said he was a coward and a fool. And so they left their play by chiding and strife.

Then said I to the damsel, My fair Cousin, anger yourself with nothing that he says, for you know well he is of high words and foolish answers … but she would not [take my advice] and she said to him that he was worth nothing and … not truth; and so the words arose, that he said, if she had been wise and good, she should not come by night into the men’s chamber and kiss them and embrace them without candles. And she … said that he lied, and he said he did not … and there was much people that heard it and knew not what to think.

It seems young people haven’t changed much down the years!  It’s a bright little glimpse of the lives of the privileged, bored and hasty-tempered young noblemen and women of the fourteenth century castle.

I love this, all very pleasing - aside from the lips licked black as cole which is delycyously horrific. Thank you.

Delightfully delycyous, Kath! I do have such strong sympathy with the poor young woman peering hopefully into her mirror, and seeing something that looks like a devil's nether regions - to be polite - staring back. Know that moment!

(Thank you again. I did not know there was an Early English imprint.)

Wonderful! I want a talking magpie now (even if it might rat me out to my husband).

Loved this! - And these things go on and on, don't they? - My mother hated her stepfather partly because he always told her that one day, when she looked in a mirror, she 'would see the Devil looking back.'

And the talking pye reminds me of a long string of 'parrot' jokes I heard when a child that are very similar - the punch-lines are all delivered by a very knowing and rather sinister parrot. Sometimes the joke is on the parrot - as with the plucked pye - and sometimes on the owner.