Can war be seriously examined through art inspired by American comic strips? As a biographer I am fascinated by the different ways in which human stories from the past can be effectively examined and presented, particularly when this touches on my own current area of interest, the Second World War. So I was captivated when a friend and neighbour, Brian Sanders, published a stunningly beautiful and evocative picture book memoir, Evacuee. Sandy, as I know him, is now working on the sequel, about his life in post-war London, and invited me over to have a look.

If you are as stunned as I was by the cover of Evacuee, I should perhaps mention that Sandy has had a wonderful fifty-year career as a professional artist with commissions ranging from magazine illustration, Penguin book covers and postage stamps to being the official artist portraying the making of Stanley Kubrick’s 2001: A Space Odyssey during 1964-65, and designing the advertising poster for last year’s acclaimed television series, Mad Men. However, it is Sandy’s work portraying war, and the impact of war on lives, that fascinates me most.

As a young man, Sandy served in 45 Commando Royal Marines during the Suez Invasion and later in Cyprus. His irrepressible talent for capturing the scenes around him was soon noticed by the intelligence officer, and he was recruited into the Intelligence Section to record events, the movement of people and so on, as well as producing occasional private portraits. When he returned to Britain all his drawings were in his sea-kit bag, and had been stolen before he arrived. The only piece he has from this time is the one published in Soldier magazine, below, showing how far from reality the public image of life in the Libyan desert was at the time:


Sandy never sought a career as a war artist but commissions for various publications, and several series of stamps including those commemorating the 50th anniversary of the Second World War, naturally followed his experience and the trust placed in him as an artist who, as he put it, ‘had been there, and understood what war was’.

Now a pacifist, Sandy has always aimed to report historically rather than comment through his art, letting events speak for themselves. ‘I wouldn’t glorify war’, he told me, but ‘in fact I have advertised war, I have done pieces for Officers Magazine and so on’. It was only when he came out of the Royal Marines that he gained a new perspective on Britain’s involvement in Suez, and his attitude started to shift.

After a rich career in what is called ‘lifestyle illustration of the 1960s', Sandy is now taking a very different look at the Second World War, focusing on his own childhood as a London evacuee in Saffron Walden, a market town in Essex. Free from the constraints of commission or briefs, this is a very personal project, the impact of which comes from both its clear sincerity and its wonderful evocation of time and place. 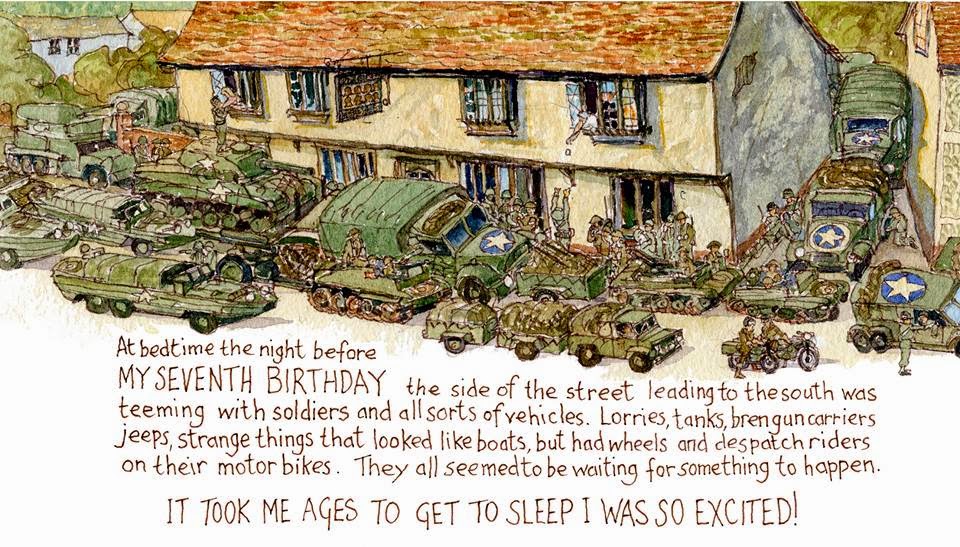 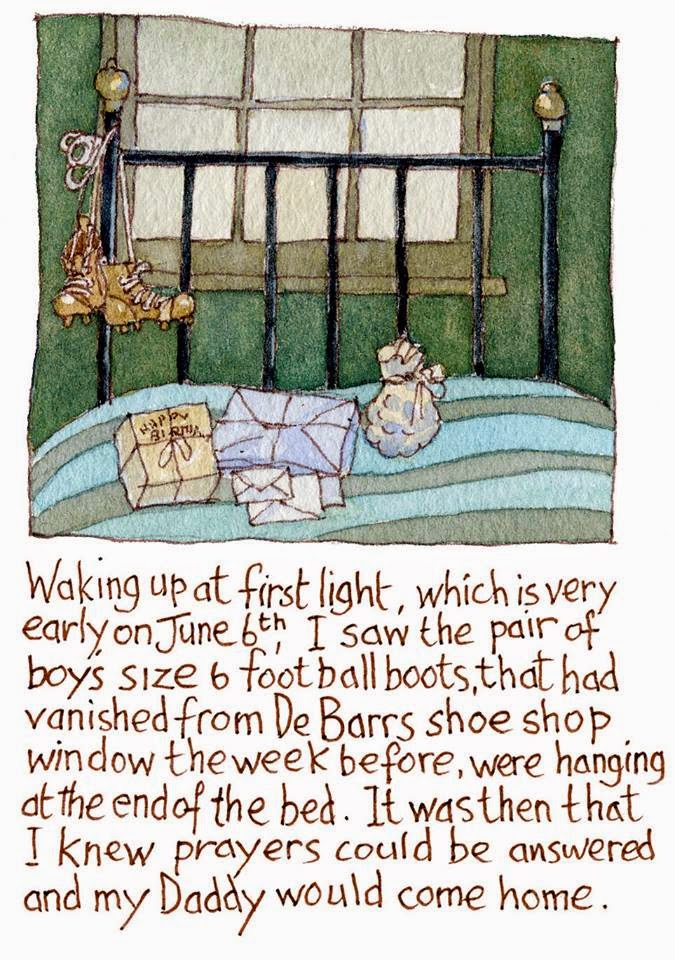 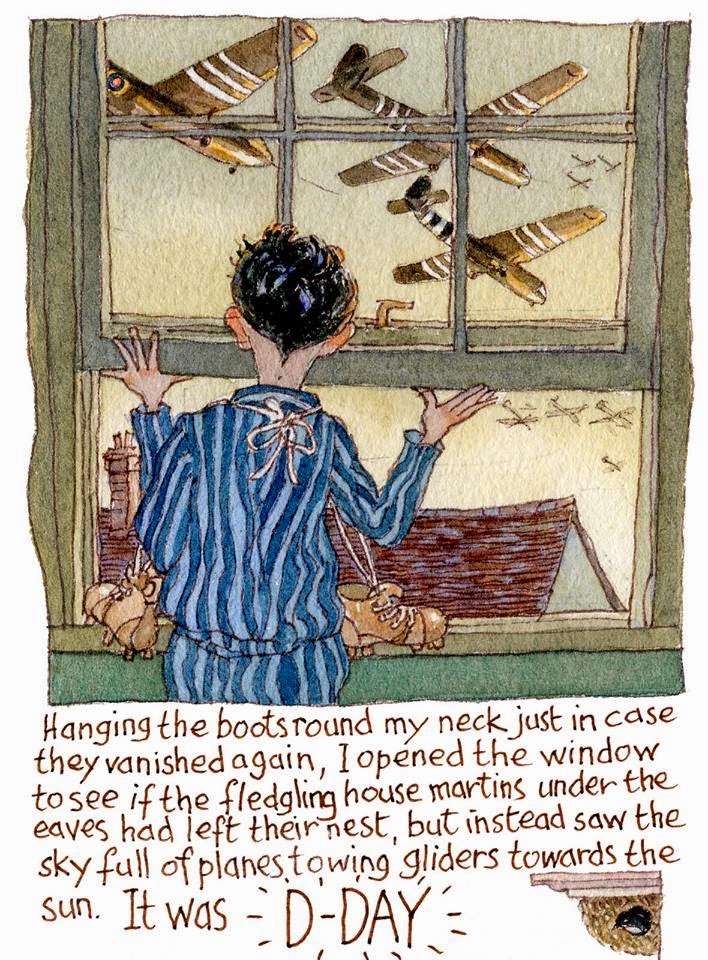 Sandy told me that his great blessing is that he has always known he had to draw. The Evacuee project began with loose sheets of pictures drawn from memories, and collected in a small black folder until he suddenly realized there was a book there. He found no problem remembering what he saw, and felt, as a child; ‘my problem is eliminating pictures, not finding them’, he told me. Soon he realized that the book was naturally going to be told from the perspective of his younger self in the form of the American comics that he had collected during the war, and long afterwards. In this way the book speaks directly to ‘children of all ages’, from three or four, up to 65 or 70; ‘the people who were there’. As a result Evacuee is great fun, with hundreds of wonderfully evocative visual details, and the echoing refrain that rang in his ears as a boy; ‘because there’s a war on’. And yet although Sandy’s own father survived the war, he makes a point of recording without unnecessary elaboration that those of two of his friends did not.

Evacuee is an honest book and this, combined with the stunning art-work, is where its power lies. ‘It’s about the people that I love, that I loved at the time’ Sandy says simply. Although increasingly conscious from readers’ reactions that the book is seen as a much-loved contribution to social history, his intentions were always just to record and let the pictures speak for themselves. This is a world beautifully observed by a child and reproduced by his adult self, which is at once deeply personal and yet also gloriously familiar. ‘It is deliberately for everyone’ Sandy told me, but because it is his own story it is also compellingly authentic. Surely this is social history at its best.

Sadly Evacuee is currently sold out, but the good news is that as I left Sandy this afternoon he was heading to his studio to work on the sequel about his life in post-war London and Saffron Walden holidays. I will let you know when it is out, but here is a sneak preview of a page in progress:

This is a really good example of showing us rather than telling.This is clear even form these few extracts.
He shows us what happened from the young boy's point of view.
I really want to read this now.
And aren't the pictures wonderful?

Evacuee is really wonderful, so I recommend the sequel and will post details when it is published.

I am not entirely sure about this, as there are many fine buildings in Saffron Walden, but the house on the cover looks very like the Old Malt House which - for a while - was a Youth Hostel.

For some years the timber framed building was, out of season, used for Residential Writing Courses for children and young people. The courses had grown from a much wider writing scheme set up by the author and far-sighted County English Adviser Dennis Hamley.

Eventually problems like rising costs and higher profile school skiing trips made these courses uneconomic, but while they did run, the historic atmosphere of the building and of the small town were used as inspiration for the writing, as was the small but excellent museum. I was proud to be on the Saffron Walden tutor list, which included writers like Linda Newbery, Michaela Morgan, John Cotton, Nick Warburton, Mick Gowar, Wes Magee, and more. (My memory is mostly of fun and awe. And the rather chilly conditions of old houses in late January and February.)

Back to the original post: the Evacuee book must be welcomed by many who love the little town. Thanks for this article.

Hi Penny, I live a few doors away from this building. It is at the end of Castle Steet. The former youth hostel is almost opposite, on the corner of the High Street and Mysdleton Place, and is one of the oldest buildings in town. Thanks for letting me know a little more about its history! It's a shame there are no classes there now - although a private residence it has still held many community events recently though. And I am delighted to be Patron of ading at the County Hogh School in town next year!

Oh, I wish it wasn't sold out! But looking forward to the sequel.

Yes, I would love to read it, too. Very interesting blog, Clare!