A VISIT TO CASTLE RISING by Adèle Geras

On a perfect April day, when the trees were "coming into leaf/like something almost being said," (Philip Larkin) 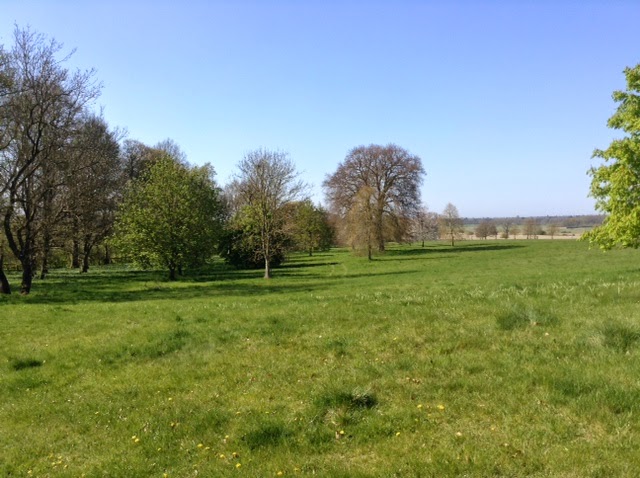 We'd had a lovely lunch and set off to this castle, which is very close to where Stephanie lives. I had, to my shame, never heard of it before, but I'm always up for visiting a castle - I like them  almost as much as I like  cathedrals and this one, as you will see from the picture below, is the most castle-y of castles...it looks like the kind of thing a child might draw. 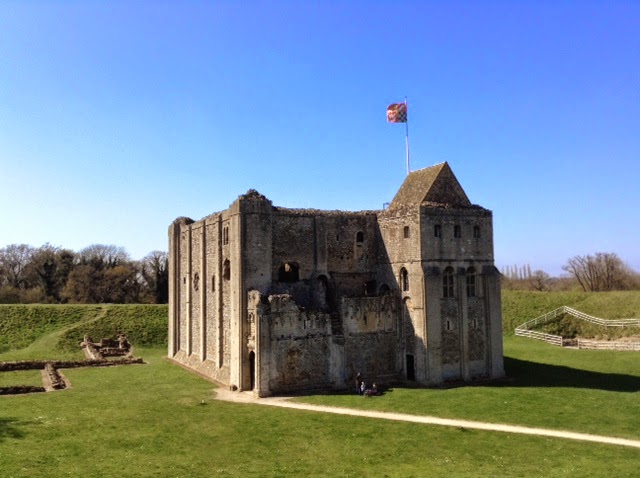 It was built in the twelfth century by William d'Albini, to show how much he'd risen in the world on his marriage to the widow of Henry I, Alice of Louvain. I wonder whether that was the reason for the name RISING but I think that's a frivolous idea....in any case it's most beautiful. 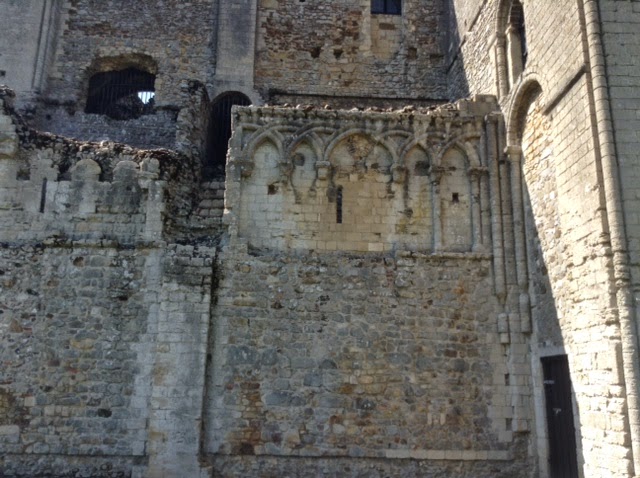 The walls are intact, although the roof no longer exists. Stephanie and I were each given a wonderful hand- held audio device which took us in order through all the rooms in the palace, pointing out fine details and letting us admire everything in  our own time. As a contributor to "DAUGHTERS OF TIME" the History Girls anthology of stories, I was impressed that they'd adopted a 'history girls' approach to the commentary and some of the information was given to us in the voice of a fictitious lady-in-waiting to Queen Isabella. She was the wife of Edward II. As  we  know  he was murdered in a most brutal way.   After his death, Isabella was imprisoned here for more than thirty years and was visited in her captivity by her son Edward III.

After her death, it became a hunting lodge for the Black Prince and in 1544 passed to the Howard family, who still own it today. 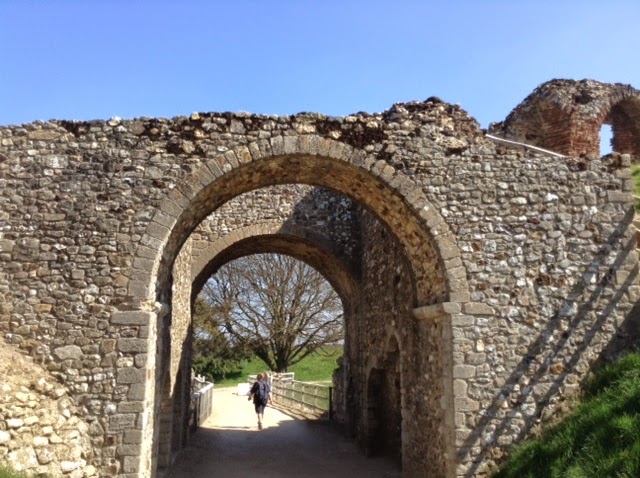 You can see much of the original fabric of the building and Stephanie and I wondered how the 12th Century folk got up and down those spiral stairs in a hurry and especially at night. They were vertiginous, even with a  rope to hang on to....how did ladies  manage it in long skirts?  Or at night? 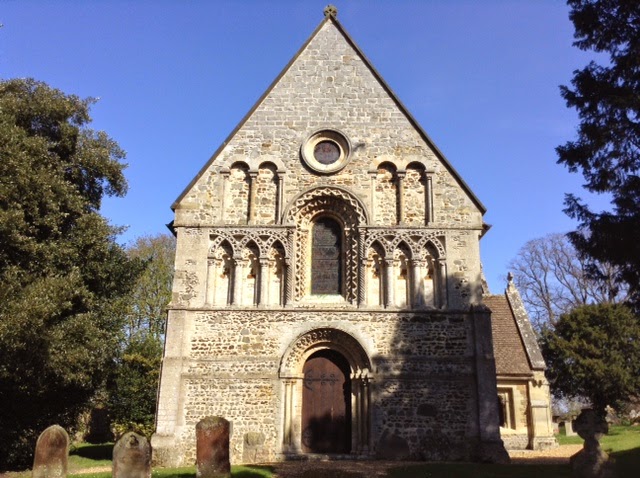 After we left the Castle, we went to see the lovely church of St Lawrence in the village of Castle Rising. It's an idyllic looking  place and the church stands surrounded by lovely houses and a most beautiful set of almshouses.

I liked particularly the font decorated with three cat faces ..... 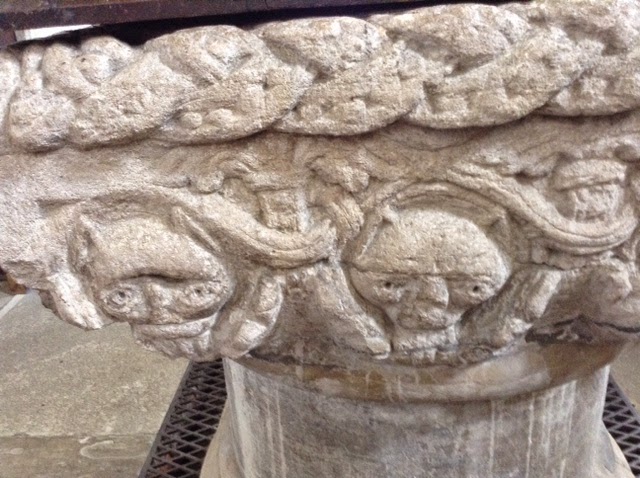 ...and this kneeler, which shows the coat of arms of Castle Rising. I've only photographed one lion but the kneeler runs  all along the bottom of the altar rail....there is a long line  of little yellow lions, looking very friendly.

I do urge anyone near King's Lynn to go and visit this delightful place.  It's quite close to where the Duke and Duchess of Cambridge will be bringing up Prince George and his forthcoming sibling and the shop attached to the Castle is full of wooden swords and small t shirts printed in a  chain mail pattern: they'd like those, as would any child. 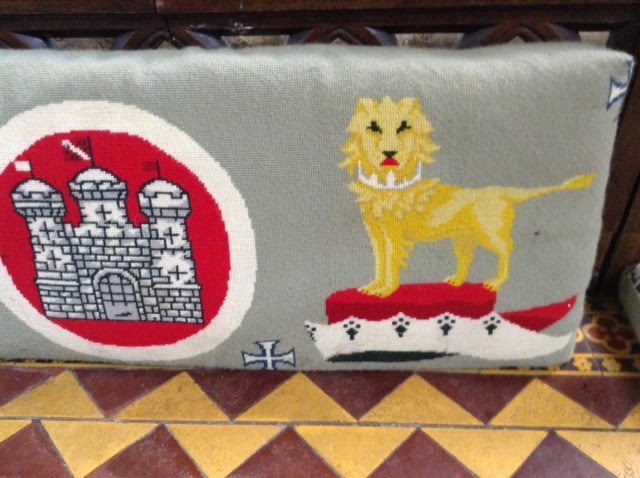 Many thanks to Stephanie Nettell for taking me there.

It looks rather like Wardour Castle, in Wiltshire - very atmospheric!

'...and was visited in her captivity by her son Edward III.'
Good heavens above. I must dig more deeply into that story.
Thanks very much for the account of A Good Day Out!

Castle Rising is a lovely name, and perhaps for that reason it's been in my memory since childhood. But I didn't know it was a real place. And I still don't know where it is - please tell us, Adele! It looks well worth a visit.

Great post. I wrote about William D'Albini and Adeliza of Louvain in my novel Lady of the English. Adeliza is one of those ladies who stands in history's shadows but deserves a more prominent role, since without her, Henry II may never have sat on the throne, but that's another story! I researched Castle Rising in depth and I was highly entertained by the detail of there being a his and hers latrine in the main private chamber, one with a seat, the other a urinal. I don't know if the castle still lays claim to it, but at one time they said this was the first his and hers arrangement in the history of English castles!

Gosh, it looks surprisingly like the Tower of London's White Tower! A magical looking place.

My husband and I could not be happier with our decision to hold our wedding at this place. We had a fusion wedding at Lincoln park wedding venues, which was complex and involved many moving parts, and we were in expert hands with their manager, our day-of coordinator (as well as the rest of the staff).